We spent our two final days playing in the pool and beach at the luxurious Fairmont Kea Lani in Wailea. Located on the sun-kissed south shore of Maui, this unapologetically upscale resort community is famous for their crescent-shaped beaches and for having the most sunshine on Maui with less than 10 inches of annual rainfall. 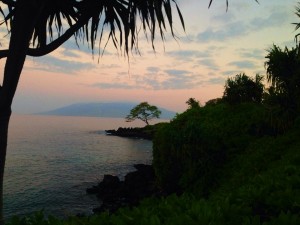 Of course, it rained much of the time we were there.

Wailea Coastal Walk. On our final morning, I went on a sunrise run on this popular boardwalk past five white sand beaches, eight world-class resorts and three islands (Lanai, Kahoolawe, and Molokini, the tiny, partially sunken volcanic crater between Maui and Kahoolawe). This 1.5-mile trail was well-maintained and the scenery stunned.

After padding about 15 minutes offshore, one of our guides grabbed a snorkel mask and jumped overboard, followed by my adventurous daughter. 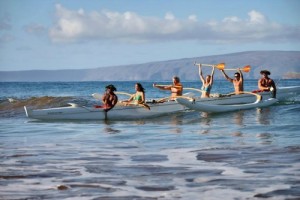 “The entire sea floor looks like it is covered with coral and fish, Mom!”

I wanted to jump in but I didn’t know how feasible it was to get out. “Will I be able to climb back into the canoe?” I asked our guide.

“We won’t leave you,” he assured, which wasn’t exactly the answer I wanted as I envisioned being dragged back to shore à la poor Dinky the dog in National Lampoon’s Vacation.

Curiosity won and I jumped overboard. I put on the goggles to reveal a swirl of color that, at first glance, resembled a cauliflower underworld. Though we had seen spectacular marine life at Black Rock, the coral and piscine beauties were positively celestial. Just when I thought I couldn’t be more blown away, our guide instructed us to listen to a pod of whales underwater. Though likely several miles away, I marveled at these mystical mammals’ secret language as they clicked, whistled and pulsed calls to each other. 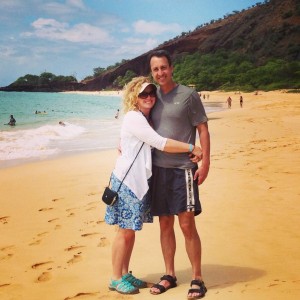 Big Beach. Most of the beaches we visited in Hawaii did not have life guard stations but when we arrived at Makena Beach a.k.a. Big Beach south of Wailea, it felt like a cut out of Baywatch. Earlier rain had scared off the crowds at this gorgeous white sand beach that is often called THE beach on Maui. Almost ¾ of a mile long and 100 yards wide, Big Beach offers protection from the trade winds and is characterized by the prominent cinder cone Pu‘u Ola‘I with great views of islands of Molokini and Kahoolawe. Picnic facilities and restrooms are also available but despite a lack of development, we had a fantastic afternoon bodysurfing and whale watching.

Drums of the Pacific Lu’au. A luau is a must for Hawaii first-timers and we were enjoyed being immersed in the traditional Hawaiian drums and dances during the Drums of the Pacific Lu’au at the Hyatt Regency Maui Resort & Spa in Maui. Using an underground oven called an imu for the pig, the pa’ina (feast) had a huge spread of food like Poi Sesame Seared Mahi Mahi Kaffir Lime Ponzu Sauce, which, if we’re being perfectly honest I didn’t love but maybe I need to expand my poi preferences.

The show’s hula dances were old-school and lovely. Early in the program, anyone who wanted to learn the hula was invited on stage so, being the stage mother that I am, I took a gazillion pictures of my deer-in-headlights-kids trying to swing their hips. 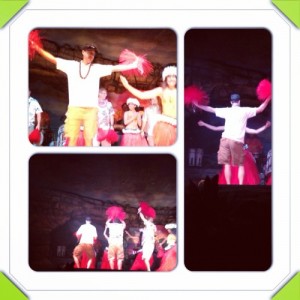 Disclaimer: photos are blurry due to excessive laughter

I spent so much energy photographing the massive buffet, fire dancers and the kids that by the end of the evening, my camera battery was dead. And that is when the highlight of the event happened: Jamie was hand-plucked from the audience to dance with a hot Hawaiian hula dancer for the finale. Following shock, reality set in, “MY CAMERA IS DEAD!” so I stole the iPhone of my neighbors, dismayed I was only able to take a few pictures and not a video.

Though I have limited evidence of his Hawaiian moment in the spotlight, I can assure you that no white guy has ever danced the hula with more aptitude. Following the dance, he confirmed, “I thought I was doing pretty good…until I looked at her hips. No one can keep up with those hips.”

But, rest assured, everyone can have a fantastic family vacation on the island of Maui.