10 (funny) tips to make travel bearable fun with a toddler!

For the purposes of this post, I am going to consider myself an expert at traveling with a toddler. I am, at least, an expert at the pain and suffering associated with traveling with my toddler. In an effort to warn inform other parents, I have compiled a list of ways to possibly delay the hell small children impose on travel enjoy your trip with your little one!

1) Don’t go. Seriously. We just attempted lunch out with Toddler only to be vividly reminded as to why they invented take-out. Just borrow some nice travel DVD’s from the library. Easier on everyone. Checkout my 10 Steps to a Fun Family Outing to see why….

2) Okay, fine. If you’ve made it past #1, you are actually planning on going, blatantly ignoring my sage advice. Fine.

2) (For reals) Scale down your expectations.

Introducing your toddler to animals can be scary for them and for you.  My toddler loves animals but that scares me because if I turn my head for a second he might end up petting a dog who is a little scared of him.

We had the chance to take him to a friend’s house who has all kinds of animals, including chickens and a miniature horse. My toddler was in heaven! But I trusted him a bit too much and started chatting.  Off he went to see the miniature horse again who had his back turned toward my little guy.  My friend saw what was happening before he even reached the horse but the thought of danger hadn’t even crossed my mind.

I started asking around about child and pet safety when it comes to introducing toddlers to animals.

Here’s what I learned:

When my child was still crawling we visited my parents who have a small dog.  I placed him on the floor to crawl around and he crawled straight for the dog who really had no idea what was going on.  Luckily my mom knew of her dogs uneasiness and was able to put the dog in a chair or outside where it felt more comfortable.  This could have been a bad situation for both my son and for the dog.  Had my son been attacked he might not have the same love for animals that he does.  If the dog felt attacked by a crawling child she might feel aggressive toward other crawling kids.

Now both my son and my mom’s dog have a great relationship.  By that I mean we keep him from pestering her and he feeds her from his high chair.

What are your tips for introducing small kids to animals?

Last weekend I had the opportunity to travel alone.  And let me tell you I was bored! I waltzed through security and had an hour to spare! Without a toddler I didn’t need all of the extra time I normally allow for catastrophe. Because if you don’t plan for it, catastrophe will happen.

Time. Allow yourself plenty of time.  When you are two you want to explore life. Not rush through it.  Rushing your toddler through an airport will frustrate them because they love to see new things.

Check your luggage.  We normally take small weekend trips to see family in other states so we pack a carry-on and we struggle getting everything to the gate.  If you check your luggage and only keep the diaper bag and your simple carry-on items you don’t have to carry all the extra weight.

Stock your diaper bag.  You will remember the essentials (wipes, diapers, bottles) but don’t forget the snacks and the toys.  I had a friend take her family to Disney.  It was a 5-hour road trip for them so she planned a surprise for each kid.  Every hour they got to unwrap a new surprise.  She bought toys at the dollar store or wrapped items from home (crayons and coloring books).  Be sure to pack an extra change of clothes for you and your child; accidents can (and do) happen.

Comfort. You might not be traveling at your toddler’s best hour.  Be sure to pack things of comfort for your little one.  They may have a favorite blanket or you might need to pack a favorite snack or candy.

Games and entertainment. Toddlers have a fascination with phones and electronics.  This may be the time to allow a little play time.  Did you know you can lock your kid into an app on Apple products? Follow Settings>General>Accessibility>Guided Access. Your toddler will not be able to exit the app of your choice. 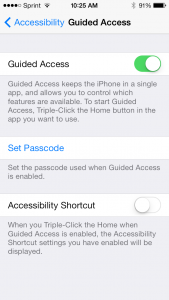 Puzzles, coloring books, and reading material are also great for entertainment. Don’t forget to be a part of the play.  You can pretend to cook on the tray in front of you or you can join in on the coloring fun.

What are somethings that have worked for you and your toddler?

Working Mom Moments: My kids are always with me

The first sound I hear from my toddler as he wakes up in the cold, dark morning. It isn’t a loud or ferocious “roar,” it is a faint whisper.

I let him carry on for a bit as I move as fast as I can to finish getting myself ready for work. I finish applying my make-up and I listen intently to my boy’s imagination come to life at this very early hour.

There is a full rendition of the A, B, C’s, more roaring, then out of nowhere he starts singing “Happy Birthday.”

A mom and a toddler walk into a public restroom… This is uncharted territory for the both of them. Up to this point their potty training efforts have been confined to the house, daycare, and grandparents houses. But this? This was public.

The mom’s palms were a bit clammy as she entered into what was surely a toddler mom’s rite of passage.

Luckily the giant public space was empty except for the two of them. Relieved the mom ushered her son into the “cleanest” of the stalls and started explaining to the boy how this was not like home.

This past spring we learned that our one-year old had an umbilical hernia. Which was a relief. We were worried she swallowed a marble.

An umbilical hernia is a tiny hole in the abdominal muscles that never closed after the umbilical cord opening healed. As a child becomes active the hole gets larger. Resulting in intestines bulging through.

It sounds worse than it really is.

Using medical terms overcomplicates everything. It’s like a doctor diagnosing you with a contusion on your coccyx. You’re immediately concerned because you have no idea what they’re talking about.

You: Can this be treated?
Dr. Yes.
You: Is it contagious?
Dr. No.
You: How long do I have to live?
Dr. I don’t know. But the bruise on your behind should be gone in a week.

It was like a weird version of Pinocchio. Except instead of lying, every time she sneezed or pooped her pants her belly button grew a half a centimeter.

After three months, the novelty of her new little companion wore off.

I told my daughter’s doctor that I was worried she’d fall and somehow damage her intestines—I was really worried her sister would poke it back in too hard with a straw, or the handle of a bubble wand. He was positive injury wouldn’t be an issue. His concerns were cosmetic.

Having been pregnant, I’m no stranger to the laws of gravity when paired with skin elasticity. I didn’t need a doctorate to understand that what he meant was more intestines would come out, stretching her skin as she grew. Ultimately leaving my child with an elephant trunk-like piece of skin flapping like a windsock off her belly button.

As parents our job is to make sure that our children don’t grow up having the same issues we had. Our job is to give them different issues. Instead of low self-esteem, I’d like something more unique for my daughter. Like, being 25 years old and having a hard time putting together IKEA furniture.

So, we all agreed to have it surgically closed.

When surgery day arrived, I signed every single piece of paper in the hospital. It was all in medical terminology so the only thing I understood was, “patient responsibility.” Otherwise I have no idea what the forms said. Thankfully no fat was removed  and she still has her old nose.

After the form signing party, I walked my daughter and her favorite bunny into the operating room. We played peek-a-boo with my facemask along the way. Once we got there, she and her bunny were given strawberry scented anesthesia—which was nice. When I had surgery all I got was the funny anesthesiologist who said, “See ya on the other side…of the recovery room.”

Twenty minutes later the doctor walked through the doors. It was less dramatic than on Grey’s Anatomy. Also, it wasn’t Patrick Dempsey. Which is a good thing because he’s a brain surgeon on the show. Also (spoiler alert) Patrick Dempsey’s not a real doctor.

My daughter’s doctor explained the whole procedure. When he asked if I had any questions, I considered asking if he happened to see a pink marker tip while he was in there but decided against it (I found it after I got home—behind a book, not in a diaper).

The most difficult part of the experience was after. I had been well prepared by several staff members of what to expect from a baby coming off anesthesia. There was a lot of crying. Some thrashing, a little rage. It was like watching a one-baby episode of Bad Girls club.

The hospital staff was great. They were professional, personable, sympathetic and understanding. They treated my child like she was their child and made a stressful situation a very positive experience.

Thank you, Children’s Hospital of Colorado.

Christina is a stay-at-home mom who lives in Denver with her husband, two daughters and a cat who’ll never forgive her for having children. You can find her cleaning cracker crumbs and juice spills off the dog at:
raisinsandgoldfish.com

It’s October, which means falling leaves, Halloween, and the 3rd Anniversary of our Mama Drama advice column. We’ve rounded up and sorted out the advice over this last year so it’s easy to find what you need. Bookmark it and send it to your mama friends!

Keep the questions coming ([email protected]) and remember the more we ask, the smarter we get at navigating this amazing journey called Motherhood.

Oh, the ever-changing world of toddlerhood.

One minute, you think you’ve finally grasped the complexities, and the next minute, everything changes.

Yesterday was not a fun day. We were at the park on a playdate with our friends, and suddenly, I started feeling really sick to my stomach. I mumbled a few words and headed to the car, calmly talking to my toddler to avoid a meltdown.