Which ads were most effective?

A Lab puppy falls in love with a Clydesdale, to the tune of “Let Her Go” by Passenger. When the puppy is sold, the horse jumps the fence to run after the beloved pup. Reunited, they’re “Bestbuds.”

From the panel: Robinson: “The marketers realize that no one can resist a puppy, especially when it falls in love with a Clydesdale. Yet there is something ambiguous about the ad. Sound and image are mismatched. It’s a sad, sad song. The melancholy song undermines the “cuteness” of the story.” Wagner: “Following its emotional “Brotherhood” which topped the charts last year, Budweiser’s traditional Clydesdale spot looks to be another winner. We all love the majestic Clydesdales and the story continues with a new pal for the big steed: an adorable puppy. Is that fair? From bonding with his trainer to bonding with a puppy? Yes, all’s fair in love and Super Bowl Admeter wars (more than 24 million hits on YouTube). Tugging at the heart strings in a classy way makes for an effective ad.” Stern: “Not the most conceptual/original idea, but sweet and memorable, all about appealing to the masses.”

Jaguar “Good to be bad”

Sir Ben Kingsley, Mark Strong, and Tom Hiddleston as British villains in a high-speed chase through London, describe themselves and the attributes of the new F-Type Jaguar.

The countdown is on and our Broncos will soon be competing against the Seahawks in the NFL Super Bowl XLVIII. As much as my family is anticipating the game and commercials, we’re salivating over the food as our Super Bowl menu is complete:

I was feeling pretty proud of myself until I realized I was bereft of one item: sweets. Actually, it’s plural and as well it should be.

As I was poking around for a dessert in Broncos colors, I happened upon Our Best Bites’ Game Day Kool-aid Candy Popcorn, a super easy treat made with popcorn, Kool-Aid packets, butter, corn syrup, sugar and baking soda. I’ll be adding this delicious recipe to my list.

Just ignore that the authors posted Seahawks colors as well.

Want to up the ante on sweets? Don’t miss this recipe for a Bronco Orange Cake. 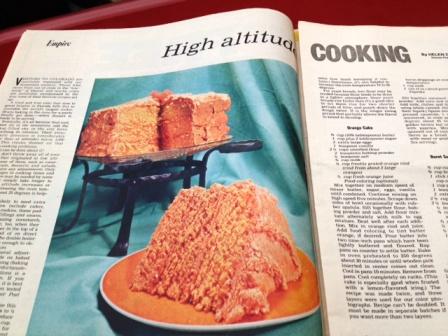 I’m sure even Petyton would approve.