Mom Entrepreneur: Finally love cleaning your showers with the world’s first 3-in-1 tool!

Just when you think you know someone, they shock the living daylights out of you by inventing a game-changing tool to tackle one of my most dreaded household tasks.

I have known Karla Call since I first moved to Denver almost 12 years ago. She’s a fun-loving mom of four, runs an award-winning dance studio and her teams have won Nationals more times than I have bothered to clean my shower. Note: The first number is very high, the latter is low. 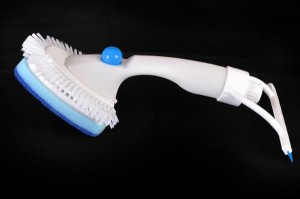 Enter: The Shower Shimmy! Karla stumbled upon the idea for her invention while cleaning her shower the traditional way.  She ventilated the room, put on rubber gloves, and gathered the sponges, rags, grout scrubber, squeegee and cleaning solution which would be needed to get the job done.  Thirty minutes later, she had finally finished this smelly, messy task  Her clothes were wet, eyes and lungs were burning and she was fed up.  She knew there had to be a better way and began work on the ultimate shower-cleaning product.

It has taken her almost two years and countless experiments that have earned her the equivalent of a Ph.D. in chemistry but she is thrilled to be kicking off her campaign for her Shower Shimmy. This tool cleans beautifully and is a non-irritating, environmentally-friendly cleaning solution.

The proof? It was tested at Microbac Laboratories against the No. 1 bathroom cleaner in the United States and it not only scored as well as the top cleaner, it was reported to be as safe as shampoo or soap.

“I can honestly say that this is the only product consumers will ever need to get their showers and tubs spotless,” she says. “The Shower Shimmy’s all-in-one convenience, coupled with its amazing non-irritating ‘green’ cleaner, takes the difficulty and discomfort out of the most hated chore in home care today and makes it easy and convenient. It is a game-changer in the way showers and tubs are cleaned and I’m excited for people to try it!”

Because its cleaning solution is environmentally-friendly and safe for kids to be around, it can be hung in the shower. When ready for use, simply press the button and the powerful solution dispenses into the sponge and quickly wipes away soap scum,  grime and hard water deposits. The bristles on the Shower Shimmy attack the grout, grime and stubborn dirt. After rinsing, the squeegee carries away the last traces of dirt.

The proof is in the pudding. Or shower. Though no persons were injured in the making of their promotional video, guaranteed I’ve never laughed so hard during an infomercial thanks to her shower-model husband, Ivan. No worries: it’s like Psycho but only slightly less terrifying.

All ingredients used in the Shower Shimmy have been marketed for use in personal applications  or are commonly found in food products. 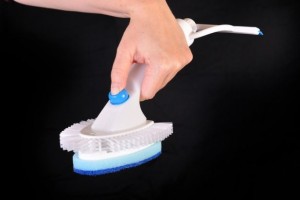 The Shower Shimmy and its Super Cleaning Solution launched on January 5th through Kickstarter, an all or nothing crowd funding site.  After only one day on Kickstarter, she landed on the crowdfunding site’s “popular” page and reached her fundraising goal…and she’s still forging forward!

Be sure to order the Shower Shimmy here: http://theshowershimmy.com/kickstarter/?id=05

Some of our favorite bloggers reviewed the Shower Shimmy and are offering $100 VISA gift cards. Be sure to enter below: