Four years ago after a whirlwind contest and painstaking selection process, I was honored to be the the Grand Prize Winner of Microsoft Office’s Winter Games Contest and was their accredited blogger at the 2010 Vancouver Games. As an avid winter sports enthusiast, this was a dream come true! For a stroll down memory lane, be sure to read all my behind-the-scenes adventures including how The Today Show’s Matt Lauer stole my moment in the spotlight, what it was like to hang out with Bonnie Blair (the most decorated woman in winter Olympic history) as Apolo Ohno broke her longstanding Olympic record and how I put my foot in my mouth when meeting”The Great One” Wayne Gretzky.

Vancouver was my third Winter Olympic Games. I grew up in Calgary and was thrilled to attend several events at the 1988 Winter Olympics and several years later I lived in Salt Lake City during the 2002 Winter Olympics. If you’ve never been to the Olympics, I’m here to tell you there is nothing like it and the host country is on fire as it showcases the world’s best competitors.

Do I wish I was going to Sochi, Russia? You betcha and I’ll be glued to the television Feb. 6-23, 2014. During that time, we’ll hear a lot of athlete profiles but what about the mom behind these success stories?  What does it really take to get to Sochi? There are a lot of difficult questions for the families, particularly since most athletes do not make the Olympic team until a month prior. As a mom, how do you plan and what kind of a financial investment is it to see your child fulfill their dream at the Olympics?

So I asked my friend Allison Scott from 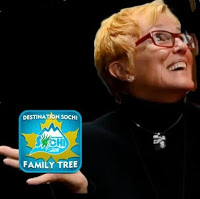 Q: What does it really take to get to Sochi?

For the families, that’s a difficult question. Let’s break this down. Flights: Back in August, “on the cheap” flights through Kayak were about $1,700 US each round trip with two stops taking a  total of 24 hours.

Hotels (because that’s your only choice) for 10 days: You can’t even GET a price over the dates of the Olympics. Every hotel says “call.” I am in the hotel business so I can tell you they are all holding rooms in a block and they will be well over full rate. Hotels at the parent’s rate was $750 per night but we managed to lower that to $500 per night.

Food: Plan on $75 to $100 US per person per day, unless you live on nothing but peanut butter you bring over yourself. Drink: Of course. It’s a requirement.

Q: This is overwhelming. How do you navigate everything?

Even though we didn’t know if our son would make the Olympic team until a month prior, U.S. Figure Skating has been doing webinars with parents since August and we were given an 80-page chaperone packet. It is not an easy situation. There are transportation issues and it takes a lot of time to get the required Visas but in order to do that you need to have your hotel reservations so it is complicated. Last fall, we found a good rate on airfare and ended up booking it on blind faith that Jeremy would make the team.

A tremendous help is Procter & Gamble with their “Thank You Mom” campaign and their sponsorship of the incredible Family Home. This building in Sochi literally becomes our home base where Olympic families meet, relax, get our hair and make-up done, have snacks and connect with other Olympic families. P& G’s support is not an empty gesture. Together, these programs can save literally thousands of dollars for a family and is a significant and much-appreciated foundation of financial and emotional support. 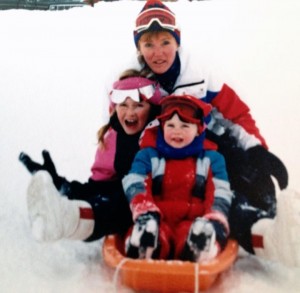 Jeremy with his mom and sister Gwen

Both my kids were born and raised in Aspen so they skied and skated from an early age. Jeremy was on the ice when he was 2 years old.  Like most kids, he started out with a cone for balance and after two minutes he pushed it aside. We enrolled him in basic skills classes and when he was 4 1/2, we took him to Winter Skate in Aspen and in that show was Robin Cousins, the 1980 gold medalist. Jeremy sat transfixed for two hours and when it was over  he said “I want to do that” and he has never looked back. When he was in eighth grade he surpassed the level of training his coaches could provide so he moved to Colorado Springs to live with a host family.  We were working three jobs to pay for his training center and we eventually followed him to the Springs. Now 20 odd years later,  Robin Cousins has choreographed Jeremy’s short program so everything has come full circle.

Q: How does Jeremy feel about his Olympic chances?

He feels very focused and prepared. This will be his second Olympic Games. In 2010 he had just won the U.S. Championships but he had very limited international skating experience so his performance in Vancouver was overwhelming and disappointing (he placed 9th overall). This year, he is in the best shape and the best place mentally. At 28 years old, he is the oldest on the men’s U.S. Figure Skating team and their second-time Olympian.

Q: After all the sacrifices to get Jeremy to the Olympics, what will you expect to spend in Sochi? And is it all worth it? 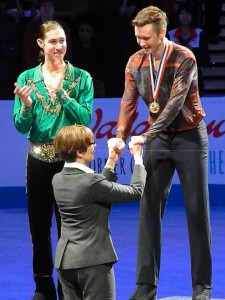 After the generosity of our federation and our major sponsor, you can expect to be conservatively in the neighborhood of $10,000 per family member or $1,000 per day for 10 days to see your child compete in the Olympics. I’ve spent my life turning a blind eye to the cost of my kids’ sports and schooling because they all excelled, and the experiences they gained along the way far outweighed the leaking pipeline of dollars it took to make it happen. I have one Olympian. I have one former X-Games competitor who now owns and operates her own business.I have one Mensa Society member who is a brilliant young general manager of a hotel.

I also have a house in need of serious repair; I have two mortgages and seemingly more debt than the federal government. I have a husband of 25 years who has stood by through all of this with (mostly) unquestioning support, taking the good with the bad and re-defining “for richer or for poorer.” I am wealthy beyond my wildest imagination because of it.

Sochi is not a destination; it’s another stop along the way. However, for so many athletes and their families, the road to Sochi is the ultimate journey. And for those families who looked at a life map all those years ago, purchased their E Ticket and charted a course, it is yet another highway with bumps, potholes and detours where the expense will be far outweighed by the experience.

Allison Scott is the Director of Communions at The Broadmoor and blogs at Life on the Edge of Skating. Follow her behind-the-scenes adventures in Sochi at the Colorado Springs Gazette.