2010 Vancouver Olympic Games: I Had the Time of My Life!

As my epic Olympic journey draws to a close, I feel like some sort of punctuation mark is in order.

And it is a big ol’ exclamation mark!!!

I had the time of my life taking part in the Office Winter Games Contest and these are just a few of the many reasons:

1) Hanging out with Olympic speed skating legend Bonnie Blair. She is every bit as genuine, spirited and delightful as she seems on camera. My fondest memory is when we were reprimanded for being too loud.Talk about a kindred spirit.

2) Representing Microsoft Office ’10. At various points in the trip, most technology failed me. I.e. I couldn’t find reliable Wi-Fi, had phone problems in a foreign country etc. Some days, the only thing that saved me was being able to crank out a draft in Word and directly upload it to my blog (a new ’10 feature) whenever I found a connection. Kudos to Microsoft Office ’10 for being so social-media friendly and a delight to promote. 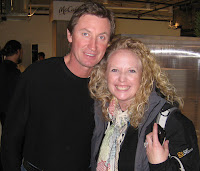 3) Meeting “The Great One” Wayne Gretzky.

And greatly putting my foot in my mouth.

And then racing a mile in my clogs to meet Bode in person at a press conference, all for naught.

5) Having the Today show’s Matt Lauer

Bonnie Blair: Exclusive Interview with an Olympic Legend and Mom

Have you ever wondered how it would feel to stand on the medal podium at the Olympics as your national anthem is played?

What kind of life you’d have as a mother after being in the international limelight?

I recently interviewed five-time Olympic gold medalist Bonnie Blair. This speed skating legend was one of the judges who made the ultimate decision to send me to the Olympics for the Microsoft Office Winter Games Contest.

Which means we can ultimately thank or blame her when all is said and done.

This down-to-earth mother of two shared her humorous take on her triumphant past and present, as well as her predictions for the 2010 Vancouver Games.

Q: You come from a speed skating family. Tell me the humorous circumstances leading up to your birth.

Bonnie: Part of what you have to remember back then is that no one was allowed in the birthing rooms like they are today. I was the sixth child to come along so my parents had been down this road. When my mom went into labor, my dad didn’t even take her inside the hospital and simply dropped her off on the front steps.

He took my brothers and sisters to watch a skating practice. They found out I was born when it was announced over the loudspeaker that another female speed skater had been added to the Blair family!

Q: You competed in four Olympics, were inducted into the United States Olympic Hall of Fame and are one of the most decorated U.S. women in Olympic history. What is your favorite Olympic memory?

Bonnie: It’s hard to narrow it down. For me, there were two stand-outs. The first was in Calgary at the 1988 Games. That was where I won for the very first time. Whenever you do something for the first time, it has an unbelievable power and emotion behind it that is difficult to capture again. Other wins were thrilling but that first was very, very powerful.

The other stand-out for me was