Mom Memories: Introducing me to one of my great loves

I heard a story from my mom the other day that I’d never heard before, and it connected a lot of dots for me in terms of how I came to love skiing. Turns out, my mom planted the seed that made our family’s love of skiing blossom.

The story went like this…When my parents were very first married, it was my mom who decided she and my dad would learn to ski, having both grown up in Ohio, skiing was not nearly as accessible as it is today for my kids growing up in Colorado. 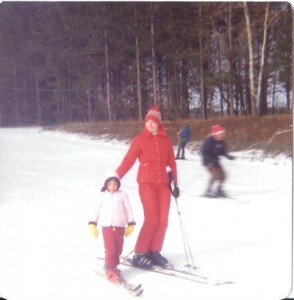 And sure enough, my dad took to skiing like a fish to water. He picked it up quick, mastered the skills, and actually skied on those old mismatched sticks for years. My mom, on the other hand, took to skiing more like a cat to water, timid, sketchy, jumpy, but yet she looked every bit the part, which to her was mission accomplished.

My parents left Ohio and moved to Minnesota. Living in Minnesota, skiing was only slightly more accessible than when they lived in Ohio. I don’t know what came first, the friends or the ski trips, but my parents became part of this group we now refer to as the Minnesota Crowd. Probably 8-10 couples, who each year would organize a ski trip somewhere. Now this was in the 70s mind you, so skiing was booming, especially out west in places like Colorado, and my parents were right there riding the wave all the way in the mid-west.

Thanks to my mom, my parents were skiers, and thanks to my parents, I became a skier, and as a parent, I have introduced our kids to skiing. A couple years ago, my parents came with us on a ski trip to Crested Butte. On the slopes one day I realized we had three generations of female skiers together, all thanks to mom.

Jennifer Rudolph lives in Denver and works at Colorado Ski Country USA, the state ski resort trade association. She has been skiing her whole life and blames her mother for her addiction to the sport, an addiction that she hopes is hereditary as Jennifer’s goal is to keep skiing with her family as long as she can.

A picnic tablecloth is such a simple thing but it can dress up any picnic lunch.

We took a lot of road trips when I was growing up. We would drive up the coast of California to visit family. Every few years, we would move across country. During those road trips, we always stopped at a rest stop for lunch.

Our lunches didn’t consist of drive-thru hamburgers but it would instead be a homemade meal packed in a bright blue cooler on wheels.

We would pull into the rest stop and stake out our picnic table. As my mom set out our lunch, my sister and I would play tag and run off the energy that children produce when stuck in a car for five hours. We would explore the information on the signs and then return out of breath to find a feast waiting for us on a brightly-colored picnic tablecloth.

The first course would consist of tuna fish sandwiches or a spread of deli meats and cheeses. I remember the way the sweet red grapes were so icy cold from being in the cooler all morning. Those grapes could have been dessert but our meal didn’t stop there. The next course came from a plastic container and was almost always homemade brownies or crisp rice treats.

Now that I have two children of my own, our road trips usually include a few meals at a rest stop. Our meals are the same as the meals of my childhood. When my children are finished getting the wiggles out, they arrive at the table ready to gorge on sandwiches and chips. When they finish eating, they seek out the bag of food to discover which homemade treat I brought. Will it be cookies this time? I still think that icy cold grapes from the cooler taste the best but the one thing that was always missing at my rest stop lunches was the picnic tablecloth.

A few years ago, my mom gifted me a picnic tablecloth of my own for Mother’s Day. Sure, I had other tablecloths that I used for various occasions but this tablecloth? It was made for the rest stop picnic table. It was bright blue with pink, orange and yellow flowers. As I rubbed my hand across the smooth vinyl, memories of yesteryear’s road trips came flooding back.

That vinyl tablecloth earned a special place in the trunk of my car, making road trip rest stop picnic lunches a little more civilized. I am thankful that my mother took the time to make the little moments like lunch at a rest stop in the middle of nowhere as memorable as she could. I only hope to pass the same appreciation of the little moments to my own children.

I am face-down on the floor, the life force ebbing from my body. Must. Dial. Phone.

I croak but can’t speak.

“Ma’am? What is the nature of your emergency?”

“Are you bleeding? Is there an intruder in the house? Are you on fire? Is there a Doberman hanging from your jugular?”

Mom Memories: The Mom Behind the Mom I Am

I was her first. She and my dad had waited nearly four years after getting married for my arrival.

Mom and Dad both had a strange sense of humor, as evidenced by the names they came up with for me. Good thing I was a girl and became Lori. If I’d been a boy, according to family lore, I would have been given my father’s initials, and thus been named, Golden Folden Holden.

Mom was hands-on. She was always playing games with us, teaching us to play piano, living at our level. Unlike me as a mom, she seemed, in those early years, to have no interests of her own other than raising her three girls (see, no boys. Proof of a merciful God?).

Consequently, I learned to read at age 3, because Mom spent hours upon hours reading to me while I potty trained. I grew up thinking books and bathrooms go together, like Dick and Jane do.

We had only one car back in those days, and my dad took it to work. So Mom was without a car from 7 a.m. -6 p.m. I can’t quite recall when she ran errands and got groceries. We rarely ate fast food and she had three homemade meals on the table each day. These days, my children and I practically live in the car and just use the house as a place to sleep and store stuff (well, the stuff that’s not stored in the car).

I remember Mom adapting to some of our health issues.

Mom Memories: “The Feeling” of Motherhood

Some days it still doesn’t seem real because some days, it seems too good to be true. Me. A mom.

My husband and I always knew we wanted to have kids. Even before we were married we would talk about our imaginary family and we even had names picked out for our imaginary kids. Staying up late at night, heads on our pillows, staring at one another just dreaming, laughing, hoping.

We were married for 4 years before we felt ready to turn those dreams into a reality. It took us a little over a year before becoming pregnant. That was a very long year. That “time of the month” became a horrible reminder we weren’t having a baby and every month it was harder and harder. Until one day…

Mom Memories: The Santa Reveal & End of an Imaginary Era

Mother’s Day is almost upon us and for the next couple of weeks, Mile High Mamas will be dedicated to all-things moms–from your favorite Mom Memories to some of your great stories about Becoming Mothers from last year.

I’ve always believed it’s important to instill magic in my kids’ childhood and my husband and I have played along with the Tooth Fairy, Easter Bunny, Santa et al. We’ve been careful to never put too much credence into them but my kids’ overactive imaginations have taken care of that.

For Christmas, we’ve kept the Santa presents to a minimum and he only brings them a couple of their requested gifts and stuffs their stockings. Mostly because I want the credit to go to me, not some plump dude sporting fur.

Months ago, my 8-year-old daughter started building a leprechaun trap and I had forgotten about it until I heard her setting it up the night before St. Patrick’s Day. My first thought: Crap, now I have to do something so made up a few mischievous leprechaun tricks.

Last year, my daughter’s second-grade teacher introduced Elf on the Shelf (likely to ensure they behaved) and the children were delighted when, each day, their elf dreamed up a new caper.

Last month, we were at the airport on Easter waiting for our flight home from Utah when my daughter, while eating her stash of candy she’d collected earlier that day, asked,

“Mom, are you the Easter Bunny?”