Camp Chief Ouray’s “Camp Magic,” a mom at play and your family’s own camp experience!

My husband Jamie and I have been parents for 10 years and we have never been alone together at our home for more than one night since having kids. So it was a shock for me when we dropped them off for week-long Camp Chief Ouray at YMCA of the Rockies located between Grand Lake and Winter Park.

But not for Jamie. As we were walking away from my daughter’s cabin, we followed the procession of parents to their cars.  “Do you know what all these parents have in common?” he observed. “They’re all smiling.” 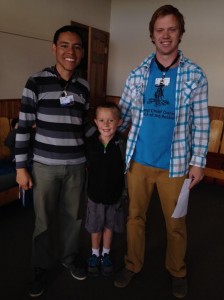 Bode with his counselors

And so were the kids. While Jamie and I reconnected with nightly dates, Hadley and Bode had the time of their lives at Colorado’s longest-running overnight camp for boys and girls ages 7-17 where they stayed in rustic cabins as they did archery, camp crafts, swam, rode horses, canoed, hiked, raided the kitchen, camped under the stars one night, gorged on s’mores, had regular devotionals, skits, campfire songs and so much more.

My family has been vacationing there for years and I thought I’d done it all until I teamed up with Marketing Director Laura Field and we mountain biked the Nordic/snowshoe trails past the biathlon range through aspen forests, emerald meadows that were slathered in vibrant hues and did a huge loop before connecting with a portion of the trail that extends from Fraser to Granby. 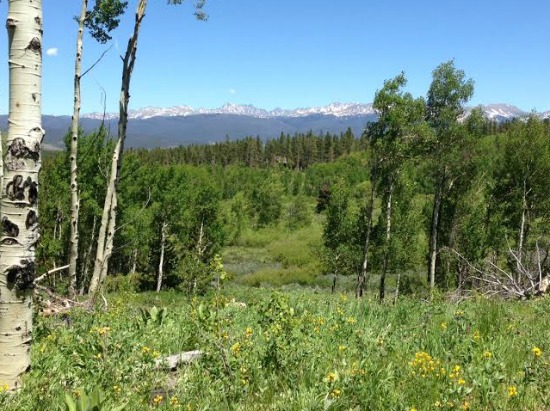 We huffed and puffed up Nine Mile Mountain’s steep 3-mile round-trip hike (one of three on-property treks), reading inspiring Beatitudes the chaplain had placed along the way. Upon summiting, we were greeted with not only spectacular views of the Continental Divide, Indian Peaks Wilderness and Winter Park but with “God’s Mailbox” where we wrote notes to God. 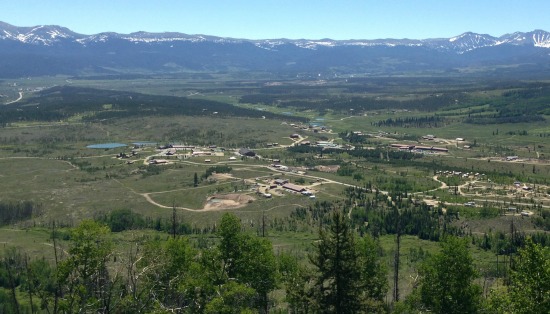 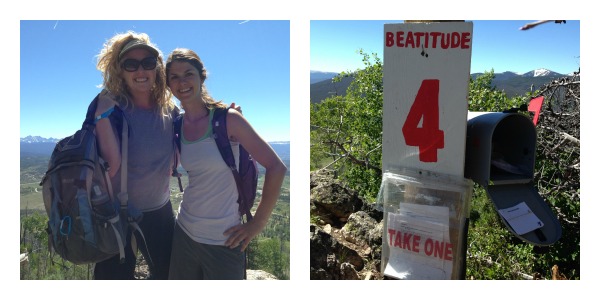 I got a sneak peak at the summer tubing hill and adjacent concession stand that will open July 15, 2014. Made of Snowflex® tubing slope from Briton Engineering Developments Ltd., this is only the third tubing hill of its kind in the United States and the first ever in Colorado. Snow Mountain Ranch guests may use this tubing hill free of charge. 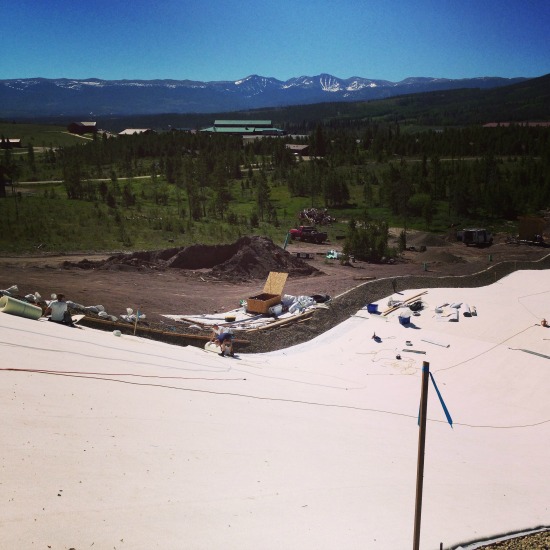 Mile High Mama Catherine will  visit the tubing hill for its grand opening so stay tuned for details!

We careened down the “family-friendly” zipline for ages 8 or older ($10). I’ve been on many ziplines–including the steepest in the United States–and was undaunted so I was taken aback when I had a moderate freak-out as I climbed the 30-foot ladder before riding the 600-foot-long zipline. 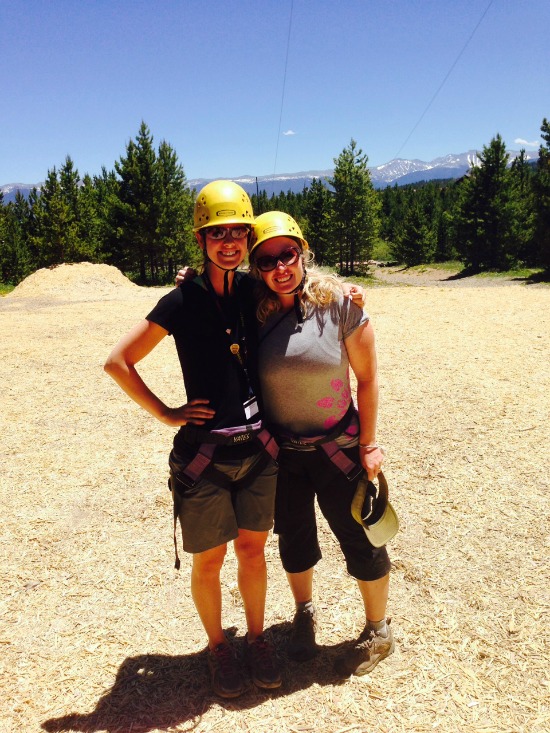 In my defense, it was very, very high.

It’ll take some coaxing for me to try their more extreme adventures on their High Zip Line ($15), which involves a 55-foot climb and a ride down a 800-foot zipline for ages 10 or older and non-wussy grown-ups. The verdict is still out for me.

That evening, I had the rare privilege of tagging along with Laura as we watched my kids in action at Camp Chief Ouray’s dance. While my 10-year-old daughter painted her face like a cat, donned her Cheetah headband and went on the prowl (while avoiding me like the plague), my girl-shy 7-year-old son avoided female eye contact (particularly after the trauma of being asked to dance last year) and instead preferred to play Candyland in the lodge with his mother. 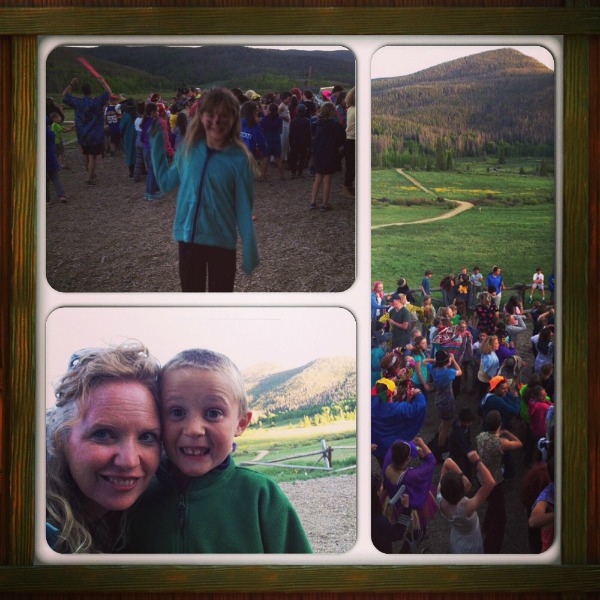 Let’s hope this is not foreshadowing for the teenage years. On both accounts.

Every year, the dance ends with all the kids and counselors racing into the meadow and dancing to “Send me on my way” by Rusted Root, followed by a rousing rendition of Y-M-C-A. This year, I joined in. Clearly, I was two steps behind everyone. 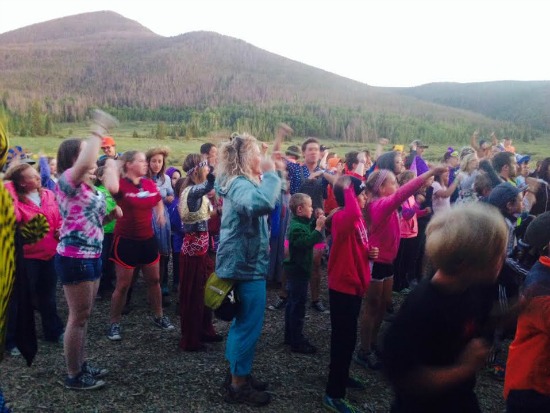 One of these things is not like the other.

Sunset burned like a million watts of light, so beautiful that I felted panicked I couldn’t take it with me. We tiredly wrapped our day with an Evening Program/Vespers Campfire when the revered “Spirit Stick” was awarded to the week’s most spirited cabin, followed by some skits that had us laughing one moment and nearly in tears the next.

On the final day at Camp Chief Ouray, parents participated in a closing ceremony that gave a glimpse of the songs and lessons learned at camp. Each cabin shared their “Camp Magic” (favorite part of camp) that was everything from gooey science concoctions made in the cafeteria to squeals from unwelcome mice to kitchen raids.

My kids raved about their experiences the entire 1.5-our drive back to Denver. This was Hadley’s second year at Camp Chief Ouray and she was so enamored that she begged me to participate in their L.I.T. camp (Leader in Training) when she gets older. I deem anytime a 10-year-old is able to see beyond herself and is vying for leadership experience to be a very, very, very good thing.

This was Bode’s first time at Camp Chief Ouray. He, too was bursting with excitement but when I asked him how he would rate camp, he said, “I’d give it a 9 out of 10.”

“Really? Why only a 9?” I was sure the moderately traumatic dance may have had something to do with it.

“I kept losing all my stuff and then finding it again.” 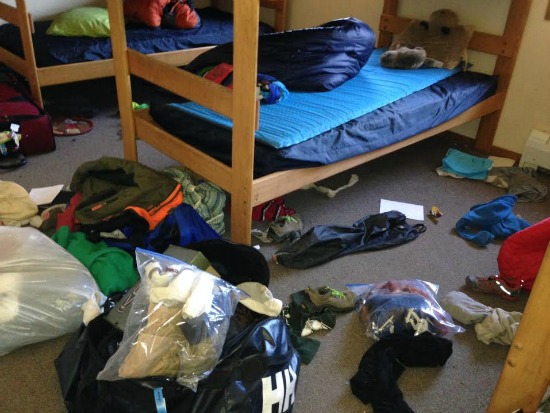 With a bunk area like that, it’s no surprise.

But an important part of the camp experience is leaving home, becoming more independent, stretching the limits and realizing Mom isn’t always going to be there to pick up after you…while still having the time of your life.

That is my Camp Magic.

Do you want to experience your own kind of Camp Magic as a family? Be sure to sign up for Camp Chief Ouray’s Family Camp over Labor Day weekend where your whole family will participate in a traditional camp of your own!

Isn’t It Time For Some Official Grocery Store Rules?

It seems like for the past few months, I’ve been asking myself over and over, “Were certain things in life always this aggravating?  Are people getting more exasperating or am I just getting older and more crotchety?”

And, lately, I’m usually asking myself that question while I’m at the grocery store.