Build Your Own Black Light Secret Message – Perfect for Trick or Treating!

We are always looking for new and fun science activities at the Steve Spangler Science Labs.This Halloween season we have really outdone ourselves with a new product line that includes Vampire Slime and Vampire Veins. We have also created this simple and easy craft that also teaches a lesson in the science of glow.

Some of the adults in the company may also sneak into Steve’s Playroom, turn off the lights and put together puppet shows with our black light projectors. I won’t tell if you won’t tell. 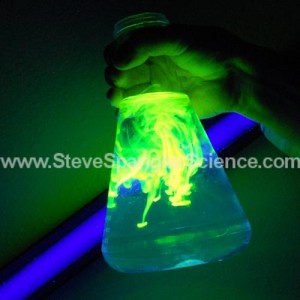 I’m also prepping to do this activity with 20 Brownie Girl Scouts this Tuesday. I can’t wait to see what they all come up with. I know it will be beyond anything that our Spangler lab rats have created the past few weeks.

This black light projector is perfect to take along Trick or Treating, not as a flash light, but as a fun way to say “Trick or Treat” or flash as you cross streets.

Let’s start with a lesson about Phosphorescence and Fluorescence.

Glow Sticks
Glow sticks are yet another way that materials can glow in the dark. Glow sticks create their glow through a chemical reaction between different chemicals. The light that this chemical reaction produces is called chemiluminescence. Just like the other two types of materials, you can see chemiluminescent materials the best in the dark. It’s not a good idea to break open glow sticks to use the liquid inside. Most sticks contain a glass tube inside that shatters to mix the chemicals together. You don’t want to pour glass shards out for children to touch. The chemicals inside the glow stick aren’t incredibly toxic, but can cause eye and skin irritations and will stain.
Highlighters
Some highlighters use ink that contains dyes that are fluorescent. When you draw the designs with a highlighter, it probably looks like those designs will glow when you turn the lights off, but they don’t. The dyes in the highlighter ink require a black light to produce the special glow. Certain colors  and brands of highlighter do not fluoresce underneath the ultraviolet light. These highlighters do not contain fluorescent dyes. 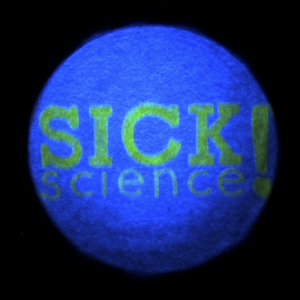