This time of year, some parents with school-age children begin to sound like classic backseat whiners:

But now, with the July Fourth holiday in the rear-view mirror and more hot days of summer still ahead, boredom and “brain drain” can become another summertime rite of passage.

Trying new things, heading outdoors for missions both planned and unplanned, tasking the imagination and repeating a favorite class or camp are all strategies parents can use to keep kids from becoming zoned-out screen zombies before the arrival of the new schoolyear.

And, it turns out there may even be some upsides to downtime.

First off, you’ve got to get kids away from the screens, says author and parenting journalist Amanda Kingloff (projectkid.com).

“Downtime immediately means digital devices,” says Kingloff, a former Parents magazine editor whose new book is “Project Kid: 100 Ingenious Crafts for Family Fun” ($22.95, Artisan). “While there’s a time and a place for (iPads and television), I do think that you have to keep kids unplugged for a while.”

Part of what drives “Project Kid,” both the book and the blog, is the option of providing kids with “completely analog” activities. Television off, book open, art materials out. Then see what happens.

“My philosophy is that crafting should be about discovering what’s around you,” Kingloff says.

Forget about using only fresh, store-bought supplies. Just like summer fashions, summer creating can be very come-as-you-are. Use whatever materials are on hand or can be foraged outside.

Kingloff says that family crafting, besides being a time to laugh, create and bond, is about trying to see the world and its objects as a child might. It’s about seeking moments of invention: “What else could that shampoo bottle be? Could it be an airplane? A a penguin?”

Her book includes such projects as a Kleenex-box piñata and a Mason jar-turned-robot piggy bank. Besides a book like “Project Kid,” the Internet and social media are rife with ideas for occupying and engaging youngsters (consult the Twitter hashtags, #summer #kids).

Let’s not forget a parent’s single best resource for generating ideas: other parents.

One last tip from Kingloff, a full-time working mother of two toddlers: Avoid the compulsion to overschedule. Give restless kids 10 or 15 unplugged minutes to themselves, and they will find something to do with their time, she says.

“I don’t think it’s necessary that we engage or entertain our kids 100 percent of the time,” says Street, also a mother and the spokeswoman for the kids outdoor sports program Avid4Adventure (avid4.com). “It’s great for (kids) to grow their ability to engage themselves. It’s also a great opportunity for them to just recharge.”

With locations in Denver and Boulder, Avid4Adventure offers age-appropriate day and overnight camps designed to teach kids as young as 3 how to kayak, canoe, rock climb, hike, mountain bike and paddleboard. It follows that Street endorses camps and classes, many of which still have late-summer openings or can offer kids a spot left open by a cancellation. It’s an optimal way to introduce kids to new skills and experiences over the summer, not to mention fight boredom and brain drain. (To browse summer camp offerings, go to denverpost.com/summercamps).

At Avid4Adventure, for instance, “it’s not just about the sport, it’s about teaching kids to push their limits and use sound judgment,” she says. “Those two things combined really help kids build self-confidence and take risks in all areas of their lives.”

For cheaper options, seek out local recreation centers and municipal intramural programs as opposed to private camps and classes. Don’t assume they’re all booked up. 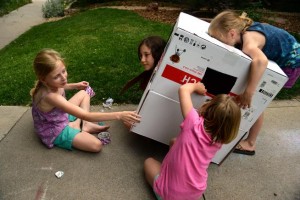 Street’s other “go-to” solution for her own family’s downtime: Just go outside for an activity as simple as sidewalk chalk art or as involved as a species-specific insect scavenger hunt.

And let’s not forget such outside-fun classics as hopscotch and marbles.

“When I was a kid, we played outside with the other kids in the neighborhood with most of our free time,” parenting and technology writer Jenny Williams recounted on GeekDad.com. “We also made the most of recess at school. We kept ourselves quite occupied without any of today’s modern technologies.”

She gives instructions for 30 classic outdoor games — Capture the Flag, Kick the Can, jacks, Red Rover, Mother May I, and several variations on the classic game of tag.

The best part? When kids work together to make up their own rules — or new games.

-Former Denver Post staff writer Elana Ashanti Jefferson is a freelance writer and editor and mom to a smart and sassy 5-year-old. To follow her on Twitter: @ElanaAshanti

Use some sidewalk chalk and make a hopscotch grid. Number the squares from one to nine. Pick a rock that is good for tossing. Small ones can bounce too much, and larger ones are hard to throw. Start by tossing the rock onto Square 1. Hop over the rock and hop with a single foot or both feet (to follow the hopscotch pattern) all the way to the end. Turn around and come back, stopping on Square 2. Balancing on one foot, pick up the rock in Square 1 and hop over Square 1 to the start. Continue this pattern with Square 2. And so on. If you toss your rock and miss the correct square, your turn is over.

The player scatters the jacks on the playing surface, often by just tossing them out of one hand, as if rolling dice. The ball is then tossed up, is allowed to bounce once, and is caught before the second bounce. The player tries to scoop up jacks and catch the ball with one hand before the ball’s second bounce. The number of jacks to be picked up goes in order. First you pick up one (“onesies”), then two (“twosies”), then three and so on. There are many variations to the rules of this game including things like “pigs in the pen” and “double bounces.”

The general rules specify that you draw a circle in the sand or on the sidewalk, and then take turns trying to knock each other’s marbles out of the circle with your one large marble. As with the other games, there are countless variations.

This game can be played anywhere, even in a car or other small space. One person is Simon and starts by saying, “Simon says, ‘<insert action here>.’ ” Everyone must then do the action. However, if Simon makes an action request without saying, “Simon says” to begin the request, anyone who does that action is out. The last person still playing in the end will be Simon for the next round.

In a circle, arrange chairs facing outward to total one fewer than the number of players. An additional player needs to be in charge of the music. When the music starts, the players walk around the chairs. When the music stops, players sit down in the nearest chair as soon as they can. The one player who does not have a chair is out. One of the chairs is then removed, and the game continues in this manner. The player that sits in the final chair is the winner.

Choose one person to be in charge of the music. When the music starts, everyone else dances, the crazier the better. When the music stops, the dancers must freeze in their position. Anyone caught moving after that is out. Play continues until there is one person left, the winner.

Telephone Players sit in a circle. One person thinks up a sentence or phrase and whispers it to the next person. That person repeats it to the person on their other side. This continues around the circle. When it finally reaches the last person, that person says the sentence out loud. Hilarity ensues.