Step aside because there’s a new kid in town and Bruxie’s fast-casual gourmet waffle restaurant may just make a convert out of you. This popular eatery opened their seventh location–and their first outside of California–in Denver last week. 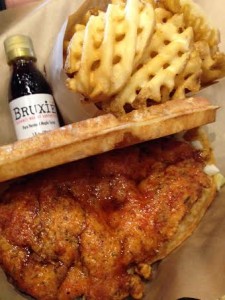 I love waffles as much as the next person but I was unsure how they would translate into savory selections like the Bruxie Burger ($7.50) or the Prosciutto di Parma and Gruyere ($7.95). Then I rationalized that I love crepes in all forms so figured Bruxie Waffles was worth a try.

All the sandwiches are built on light, crisp, yeast-risen waffles. If this sounds overly indulgent, each waffle is 250 calories. To put this into perspective: Chipotle’s flour tortilla in their burritos is 300 calories so eat up!

I chose the waffle-cut fries on the side while Jamie opted for the Caesar salad, which he said was too strong but I countered it had just the right kick of anchovies.

If you want to just order waffle-cut fries, you could go a step further and try a Canadian delicacy: poutine (crispy waffle fries with cheddar cheese curds and old-fashioned brown gravy for $7.95).

Or, if you’re like me, just eat off your friend’s Irish Nachos ($7.95) with their Bruxie Cheese sauce with applewood bacon, sour cream and chives and they’ll eventually bring you out your own, likely because they can’t have you bilking off other customers like that.

The kid’s menu ($4.95) is for kids ages 8 and younger with three waffle choices (cheesy, PB&J and s’mores) that includes a small drink, waffle fries or fruit. Another option is the kid’s Brussels waffle with whipped cream, berries and a drink. My 7-year-old son said it was “the most awesome PB&J ever” and my daughter thought we were kick-butt parents for letting her order s’mores for dinner. On a waffle, no less! 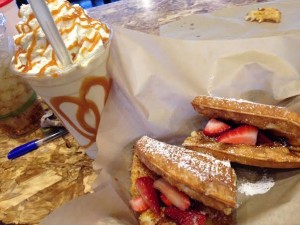 Dessert options are plentiful. Try the Liege Waffle with caramelized pearl sugar and optional nutella ($3.95) or the seasonal crème brûlée waffle ($6.50) with classic vanilla creme with burnt raw sugar, cram-packed with fresh strawberries. The real Wisconsin frozen custard was a huge hit and you can’t go wrong with the more than a dozen house-recipe shakes and float options. One of the chefs also highly recommended the Lemon Meringue “Pie” waffle with lemon cream, graham crackers and toasted marshmallows for $5.95.

So, why did the owners of Bruxie Waffles choose Denver for their first out-of-state expansion? “Shortly after we opened our first Bruxie in 2010, we realized it struck a chord who diners who craved bold, flavorful combinations,” says Founder Dean Simon.”I see Denver as one of the most food-centric cities in the country. We believe we have created something noteworthy and hope the people of Denver will agree.”

As we were walking out, I asked Jamie what was his favorite item on the menu.