Father’s Day is Sunday and as plans take shape for barbecues, picnics and outings to commemorate the day, we asked a few Denver-area dads to share their thoughts and advice regarding fatherhood.

They include the father of a 9-month-old boy, who reveals what surprised him most about becoming a father for the first time; a Denver Fire Department captain who recalls advice he gave his daughters when they were young, and a single dad who describes what he and his twin daughters do for fun.

No need to panic

“Try not to let those first few months be defined by the predictable stress of your new situation,” advises Andrew Hudson, 48, the founder of Andrew Hudson’s Jobs List, and father of Julia, 4, and Mateo, 2. He also is stepfather to wife Christine Marquez-Hudson’s 14-year-old son, Nick.

“Instead, embrace every moment of joy, love and the incredible fun of being a new daddy. And don’t worry about not being prepared to be a new father; believe me, new dads throughout the world are learning on the job. You, too, will survive and adapt in your own way.”

Rob Moreno, 34, an executive with Wyndham Worldwide who plays rugby for the Denver Barbarians, has learned a lot in the few months since daughter Vivienne was born on Feb. 14. Here are some of his tips: 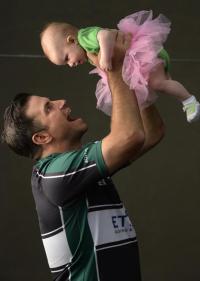 “Before the birth, stock up on food. For real; my wife was like a starving tiger, and it turns out that I had sympathy hunger. Make casseroles, lasagna, anything that can freeze.

“Ask questions, even about something as simple as how to bathe the baby. Or, just be like Jill and I and YouTube absolutely everything about babies.

“When checking out of the hospital, don’t let your parents grab all of your luggage; the baby needs something to wear home! Otherwise you end up taking your baby home in clothes left behind at the hospital.

“Compliment your partner. Nothing gets the connection back faster.”

Where are the directions?

“I was 34 when Joseph, our oldest, was born,” says Bill Sullivan, 50, president of Colorado State Bank and Trust. “I remember coming home from the hospital and looking for the instruction manual, only to find there isn’t one. But you learn quickly. Each age brings a new set of challenges and a new set of activities to do with them. Each stage is different, and each stage is great.” Sullivan also is the father of Michael, 14; Grace, 12; and Sean, 10.

No matter how well-prepared Dr. Bryan Reider thought he was for his first experience with parenthood, he knew he’d be in for a surprise or two. He just didn’t expect it to be adjusting to a lack of sleep. “I thought medical school and residency had prepared me,” said the 28-year-old family medicine specialist from Fort Collins. “But interrupted sleep turned out to be the biggest surprise after our son, Easton, was born nine months ago.”

Denver Fire Department Capt. Kevin Duncan, 57, says the best advice he gave his daughters Shania, 32, and Shyra, 29, was the six points he impressed upon them when they were in junior high school: There are trade-offs, nobody gets it all; success is happiness; everybody needs somebody to lean on; don’t look over your shoulder if you want to go forward in life; and remember that love should not hurt. “That is what life is,” Duncan says. “Balance your time, and don’t forsake your family.”

Herman Malone, 67, president of RMES Communications, agrees. “(Children) don’t come into this world knowing everything, and a father should be there for them. Fatherhood certainly gave me a sense of purpose, and every child needs a responsible father. You want to be there for them and leave the right legacy.” Malone’s children are Leon, 41; Miles, 36; Pamela, 31; and Carie, 23.

Let them teach you

Clarence Low, 47, president and chief executive officer of Archipelago Web and the Asian Chamber of Commerce, says his sons, Alex, 18, and Jared, 13, “have made me a better person for allowing me to see that children are products of what you feed and nurture. They come into the world wholly dependent on their parents, and with the cleanest slate, to learn and absorb everything around them. They seek guidance, love and encouragement — among a million other things — from their parents. You know you’re doing something right when other people comment on their good behavior in public, or that they’re able to make good decisions without you hovering over them.” Come fall, Alex Low will study marine biology at the University of Hawaii at Manoa; Jared will be a freshman at Evergreen High School. 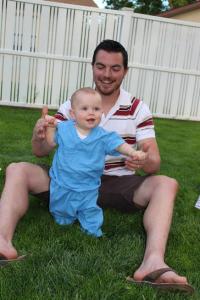 Ditto for James Mejia, 47, chief executive officer at Mejia Associates. His blended family has three daughters: Alexandra Bernal, 10; Moya Mejia, 10; and Riley Mejia, 4. “As a father of daughters, I learned quickly that girls mature at a much more rapid rate than boys and that conversations about the ways of the world, social phenomena, goals and ambitions needed to take place at a very early age. They are way smarter than I was growing up. I have also learned that as quick-witted girls, my daughters do not have the same biases as older generations. They celebrate relationships between same-sex couples and have an incredibly diverse set of friends.”

“The most fun I have with my daughters is when we try new things,” admits Gino Grasso. The president and founder of Denver Browns Baseball has shared custody of 15-year-old twins Caitlyn and Courtney. “We love going to all the great restaurants in Denver and trying new food. We also love cooking at home while listening to music. I grew up in a big Italian family, and cooking is something that brings us together. We buy fresh ingredients and take time to prepare good meals while listening to Frank Sinatra and Dean Martin. I also love being at their soccer and volleyball games. They have grown up with my Denver Browns baseball teams and have been by my side since Day One. They always have their Browns gear on. They help me out with merchandise, talking to fans, razzing the players and more. It’s in their blood.”

State Sen. Bernie Herpin, 70, says if he could change anything, “it would be to spend a lot more time” with daughters, Tiffany Dawn Koch, 42; Heather Nicole Lindquist, 40; and Kari Ann DeBurger, 36. “Being in the military as they were growing up, I was gone a lot. I was a submariner, and Linda (his wife of 49 years) had to be a single mom while I was on patrol for months at time.” Today he spends as much time as he can with them and his grandchildren.

Shawn Hunter, 50, co-chairman and chief executive officer of the USA Pro Cycling Challenge, says his greatest reward as a father is “Watching two boys — 15-year-old Dillon and 12-year-old Daulton — turn into great people who are kind, polite and have a great work ethic. They have a great future.”

Former Denver Mayor Wellington Webb and musican Charles Burrell are among the 10 Men of Distiction, Fathers of Wisdom who will be honored when Denver Urban Spectrum hosts a dinner and entertainment extravaganza on June 15 at the Mirage Event Center in Aurora.

“Life moves pretty fast. If you don’t stop and look around once in a while, you could miss it,” observes Denver Urban Spectrum publisher Rosalind “Bee” Harris. “We thought it was a perfect time to stop and smell the roses and honor these men who are so deserving.”

In addition, Drs. Bernard Gipson Sr., Russell Simpson and Johnny Johnson, plus dentist Collis Johnson, will be given the Taking Care of Us Award.