Need a bit of pampering during your chaotic summer? Look no further!

Lemongrass Spa Makeup Tube
One of my biggest obsessions is makeup, so naturally, I am always excited to try out new stuff, and boy have I found the perfect tube of happiness. This giveaway by Mile High Mamas will be sure to make any woman jump for joy. Lemongrass Spa has put together the perfect combination of smoky, sexy and subtle. The matte black mascara gives a pop to the eye, while the plum and dazzle shadow duo can switch so easily from day to night. You’ll be pleasantly surprised with this little kit of pretty. One lucky mama wins the Glamour Eye Gift Set valued at $25.00. ourlemongrassspa.com

I usually try and pick edible products or items that might accessorize my or my son’s wardrobe for the product review. This was not the case for October. It’s back to school and I got an adorable e-mail from Katie of Hurtie Hug and I have soft spot for local entrepreneurial moms . . so I agreed to give the Hurtie Hug a whirl. There was no food involved but there was an accessory!

The purple Hurtie Hug ended up sitting on my counter for two weeks, my 1-year-old was not big enough to wear it. He had gotten plenty of bruises, cuts and bumps during those two weeks that would have benefited from the sample product, but alas, I had no need for it. Then I thought; we are the wrong demographic. The Hurtie Hug is adorable and girly, why not see if Emma, my 12-year-old, soccer-playing neighbor could benefit from the product. Ahhhaa. 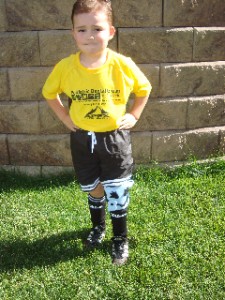 The Hurtie Hug is the ultimate stylish accessory for the young girl, boy and tween who injures herself during a soccer practice, jazz class, Kung Fu session, Emma informed me. She liked it because it stayed in place and did not allow her ice pack to leak anywhere. Emma also liked how the ice pack did not have to come in direct contact with her skin since it was in the Hurtie Hug pouch. There’s the entire product perfectly explained by Emma!

Basically, it’s a fleece pouch that holds a hot or cold pack for injury.

Not Your Typical Tea Party

Last week, Amber and I were invited to head up north to Celestial Seasonings’ 40th Anniversary Event. We were going to partake in the celebration and meet the Blend Master, Charlie Baden!

And, I was going to try my hardest to refrain from asking if the event was sponsored by the Letter T.

When we arrived at Celestial Seasonings, we were greeted with quite an elaborate spread of foods, beverages, and a full evening of entertainment. We realized that this wasn’t just a 40th Anniversary Celebration, this was a reunion. There were employees from all eras and areas attending. Some had flown in for this event. Everyone had name-tags with their names, former (or current) titles, and the years of their service.

You could tell that they weren’t just coworkers; they were family.

That’s what struck me the most about Celestial Seasonings. Yes, it’s a successful Colorado company. Yes, it’s a company that started out in small-town Boulder and grew to a market of 60 countries. Yes, the event was a Zero Waste Event, meaning every single piece of trash from the party was either composted or recycled. But, what struck me the most was the passion for not only their product, but their people.