I felt a little guilty waking the kids up so early on a Sunday. But Denver’s Race for the Cure started at 7:30 a.m. and I figured, if we were all going to do this, then we might as well participate in as much of it as we can. I’d never done a Race for the Cure before, but thought that this was a good year to try it given my diagnosis back in May.

The lump was found by my gynecologist during an annual exam. Lying there on the table after he pointed it out to me and I felt it for myself, I thought, “Duh, how could I have missed this?” The lump was so obvious and superficial; it was clearly something that needed to be looked at by a doctor. I just never did the self exams before so I never felt it. I even had my first mammogram six months earlier and it wasn’t picked up.

We arrived in downtown Denver for the Race and I was blown away by the amount of people that were there. I knew it would be crowded but there were thousands upon thousands of people flooding the streets; women, men, kids, teams and groups of participants. There were lots of people participating dressed in costumes and homemade shirts and uniforms. We were wearing our white, free-with-registration Race T-shirts, although my T-shirt was dark pink with the words Survivor scrolled down the front. I was being optimistic when I signed up for the survivor shirt because I’m technically still working my way towards survivor status. 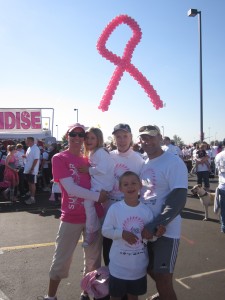 I had a bilateral mastectomy in July, and another surgery a week later to remove infected lymph nodes from my armpit. One thing I was surprised to learn throughout the whole process, and it’s probably thanks to the support from fund raisers like the Race, is the number of choices I had for how to deal with the cancer. Today, most women can dictate their plan of action in

Vaccine against breast cancer in the works

A team at the Cleveland Clinic has laid the scientific groundwork for a breast-cancer vaccine that may work much the same way as immunizations for mumps and measles.

The vaccine is made using a protein called alpha-lactalbumin, which is prevalent in a wide range of breast cancers, scientists said last week.

“This is a first-of-its-kind prototype,” said Dr. Vincent Tuohy, principal investigator of the research.

While the vaccine so far has been tested only in mice, Tuohy said human clinical trials could begin as early as next year, though a marketable vaccine is at least a decade away. He also predicted that the vaccine one day could be administered routinely to women starting at age 40.

Dr. Janice Lu, a specialist in breast cancer and director of medical oncology at Stony Brook University Medical Center, praised the Cleveland effort. “This is very important research,” Lu said, adding “they targeted a protein that is expressed in high amounts in breast tumors.” She said the prototype vaccine differs from the other 40 anti-breast-cancer vaccines under study that are designed to thwart breast cancer only after it has advanced. The recently approved prostate cancer vaccine, Provenge, was developed to attack cancer only after it has spread.

As with immunizations against infectious diseases, the anti- breast-cancer vaccine is administered by