Movie review: Disneynature’s “BEARS” a delight for all ages

When you grow up near the Canadian Rockies, bears are a part of your vernacular but after previewing Disneynature’s new True life Adventure “Bears” last week, I really fell in love with them. The filmmakers follow a year in the life of a new brown bear family in Alaska–from hibernation in the den with impressionable young newborn cubs Scout and Amber–to leaving the “nest” with their mom Skye while experiencing life’s great wonders and joys in their heartwarming journey.

I’ve always viewed bears as the top of the wilderness food chain but this in-depth look at their daily struggle to survive made me deeply empathetic as they navigated avalanches, the bitter cold, predators like Magnus (the dominant alpha male bear) and Chinook (the hungry outcast), not to mention their often fruitless search for food in one of the planet’s last great wildernesses. 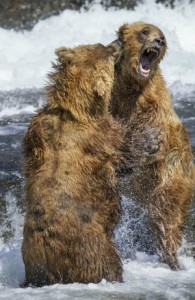 Filming was in Katmai National Park and Preserve, home to an estimated 2,000 brown bears. Skye and the cubs regularly snacked on sedge grass, ripe berries and used their claws to pry open clams and other shellfish but as the summer progressed, she grew visibly skinnier. She and her cubs were in desperate need of tracking down the feasting grounds of the salmon run. A sense of urgency prevailed during her repeated attempts and failures but have no worries. This is Disney and, though there are many dramatic moments, there is a happy ending.

John C. Reilly’s playful narration brings free-spirited Scout and clingy mama’s girl Amber’s story to life with humor as you fall in love with this little family. There is also a lot of suspense including the thrilling showdown between Magnus and Chinook at a waterfall.

The fearlessly up-close-and-personal footage makes the viewer’s connection with the bears seem so intimate. “How did they film it?” I repeatedly marveled. “Maybe telephoto lenses because there’s no way they could get this close!?”

It wasn’t until the credits rolled with featured outtakes of the filmakers in the backcountry that the behind-the-scenes story unfolded. Principal photographers spent 12 to 14 hours a day filming the bears and all footage was shot within a bear’s eye line (low to the ground) and they were often just a stone’s throw away from the bears. They did not bring firearms or pepper spray during filming, only relying on their keen sense of bear behavior to help them avoid confrontations. The only defenses they had were handheld flares that, if triggered, would light up with a bright flame, alarming an overly interested bear.

Disneynature was launched in April 2008 and “Bears” is the fifth theatrical release, with the goal to bring the world’s top nature filmmakers together to capture a variety of wildlife subjects and stories. The first four releases under the Disneynature label “Earth,” “Oceans,” “African Cats” and “Chimpanzee” are among the top five highest grossing feature-length nature films of all time.

“Bears,” has a couple of scary scenes that may be alarming for young viewers. It is rated G by the Motion Picture Association of America and opens Friday. If you see the movie during opening week, Disney will make a donation to the National Park Foundation through the Disney Worldwide Conservation fund to protect wildlife and wild spaces. Running time: 77 minutes.