I asked Denver moms on the Mile High Mamas Facebook page what they really want for Mother’s Day on Sunday. While the responses were varied, the majority of them were surprisingly low-key. The lesson? Don’t overthink it or overspend; just focus on what Mom loves. (Spoiler alert: When asked, not one of the moms mentioned that she would like flowers or chocolates for Mother’s Day. Because those treats are for the other 364 days of the year.)

Happy with homemade: Denver mom Sabrina Winder said she would be thrilled with a little love note from her husband. Several moms chimed in that they enjoy receiving homemade cards and crafts from the kids.

Kids’ Popsicle stick flower craft: Color a number of popsicle sticks, cut out a picture of your child in a circle for the flower’s center, then glue the popsicle sticks around it as petals and a stem.

For the book lover: “My husband told me to buy a few books I wanted to read,” Melissa Jackson recalled of her dream Mother’s Day. “He bought me a few goodies to snack on. He then made meals and took care of the kids while I curled up (with) my books all day long.” CLICK TO READ ON

Also watch me on 9News showcasing some of these items:

Becoming Mothers: What not to Expect when you are Unexpectedly Expecting

The day I found out I was expecting, I was in tears. I wasn’t ready to be a mommy. My husband had just left for Iraq. How was I going to handle pregnancy without him? And how was I going to tell him? Through Instant Message, of course!

Jump ahead 9 months later, it was time to have a baby girl. The delivery seemed to go pretty smoothly. There was nothing too out of the ordinary.

Like many new moms, I was having trouble breastfeeding. Baby C kept losing weight and I was forced to supplement.

Three weeks later, I was admitted back into the hospital and separated from my baby girl. Turns out, I had

Most people would have said we were stupid. Starting a family (on purpose) while I was in college and my husband in grad school doesn’t sound very logical. Right? It actually sounds crazy.

Becoming Mothers: Our One and Only

My husband and I never wanted to have children. It’s true. We were happy being childfree. We loved the life we had, and we didn’t want to change it. Our Family of Two was perfect.

For years we followed This Plan, and it wasn’t until the year I turned 30 that my mind started to open to the possibility of having a child. I know the fumes from that cliché are potent enough to smother someone, but what can I say? It’s true.

After an honest discussion, we realized that we were still on the same page, even though The Plan had changed slightly. One is more than None, but people change their minds all the time, especially when the word “never” is tossed around.

We joked we were on The Binary Plan, which is computer geek-speak for

Becoming Mothers: My Birthing Epiphany–It’s All About Letting Go! Seriously!!!

My husband and I had been trying to get pregnant for about a year. We decided to shift gears and do some home remodeling since the baby thing didn’t seem to be happening. We ordered new windows, hardwood floors, and “rice paper” white carpet and, of course, promptly discovered I was pregnant. We let go of our expectations and then, surprise!

I loved being pregnant, had very little nausea – really, like twice, and my biggest complaint was how large my mammary glands, aka breasts, became. For a while they extended farther than my belly. I let go of the image I had of my body and practiced accepting the beautiful body of motherhood.

Becoming Mothers: When your water breaks in public & baby manipulates you from the womb

Welcome to the first installment of Becoming Mothers!

I’ve been thrilled to see the flood of fantastic stories about how YOU became a mom. Be sure to tune in now through Mother’s Day to read the experiences of your fellow moms–everything from a teen pregnancy to surrogacy to open adoption to more traditional tales.

To kick everything off, the story of my soon-to-be 8-year-old daughter, Hurricane Hadley. On May 25, she graced the world with her presence. Her birth and subsequent life have been one WILD ride.

Not to mention the car we now owe her for her 16th birthday because of it.

Monday, May 24th — More than one week before Hadley’s due date. Busy making final preps on our brand new house until late. Husband Jamie is incredibly stressed with projects at work and yearns to skip out. His final words to Hadley before bedtime: “If you come tomorrow, I’ll buy you a car when you’re 16.” Daddy’s final lesson before becoming a parent: be careful what you wish for. It may actually come true.

7 a.m. — Waddles to the bathroom again. Discovers something unusually wet — her water possibly broke! Calls the doc who tells them to come in. Jamie rejoices about starting his two-week “vacation.” The reality of his car pledge later hits him with great force.

9 a.m. — Meet with the doc. Performs various tests. Bag of waters is ruptured with a leak but is not broken. Evil woman sends Amber and Jamie home.

10 a.m. — Amber and Jamie go on long walk (a.k.a. waddle), hoping to kick things into motion. Steady leak continues but no real progress.

11:45 a.m. — Decide to grab a sandwich at Einstein Bagels. After eating, Amber blows her nose. Suddenly, the flood gates open. In very public booth #3 at Einstein’s. At lunchtime. Amber hisses at Jamie to discreetly grab her some napkins to cleanup. Jamie obliges and brings back two napkins, not understanding that bag of waters is in actuality, plural. Meaning many.

12:30 p.m. — After operation “Cleanup in Booth 3,” Amber casually strolls (a.k.a. waddles with soaked pants) to the Jeep. They rush to the hospital. Jamie drops her off with a grocery bag of personal items. He proceeds to park the car and bring in the suitcase.

12:45 p.m. — As Amber stealthily walks up to the nurse’s station, she notes her appearance: soaked black sweats, unruly hair and a Wal-Mart bag for luggage. Jamie arrives with the rest of the luggage, announcing to the nurses: “Has anyone seen a strawberry-blonde with wet pants?” They chortle delightfully, later avowing his statement will go down as the funniest entrance in Birthing Center History. What a crackup.

1 p.m.-5 p.m. — Amber put on Pitocin (also known as “Pit”) to induce labor. Later discovers it is actually the “pits.” Light contractions begin but she can barely feel them and spends the afternoon watching Dr. Phil and Oprah with Jamie. Wonders what all those wimpy women have been whining about for centuries re: the “pains of childbirth.”

5:30 p.m. — Discovers what those “wimpy women” were talking about. The hard way. Now wonders why women would knowingly choose to do this multiple times.

7 p.m. — Amber’s best friend Mimi the Epidural Lady arrives. About 45 excruciating minutes later than requested. Amber practices the Miracle of Forgiveness. But not until after the drug kicks in.

7:30 p.m. — Amber is a new woman and plays the waiting game until full dilation. Jamie and Amber have a delightful time talking travel with the doc and nurse. Amber ponders the mysteries of life i.e. why anyone would chose not to get an epidural. Equates it to the lunacy of climbing Everest without oxygen but has great respect for those who do.

11:05 p.m. — Everest attained. With oxygen. But the views are nonetheless spectacular! Beautiful Hadley arrives pretty and pink. Mom Amber now understanding why women do this multiple times. Dad Jamie still worried about that new car he owes his obedient daughter. 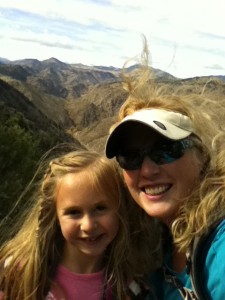 And thus began our tale of living “Happily Ever After!” (or would that be sleepless?)

25 Worst Things About Having a Big Family

It’s always wise to explore both sides of every issue. I recently shared the 25 Best Things About Having a Big Family. Believe it or not, there are some drawbacks when mom and dad are eye-crossingly outnumbered and there are more smelly little toes than stars in the sky.

1. If I ever win a family vacation for 4, it will be very hard to chose who will be left at home.

2. Look at all those dirty boots.

3. Nobody gets his or her own pumpkin on Halloween, unless they can completely cut, scrape, and carve it him or herself. We tried doing 6 jack-o-lanterns one year. Never again.

My seven-year-old daughter is struggling in school. Her teachers say she daydreams and is off in her own world so she doesn’t get her work done. At home she also needs lots of reminders and support to get things done. Someone suggested that she may have attention deficit disorder, but I’m not sure what that means. I’ve seen kids who are very hyper and have trouble sitting still, but this doesn’t fit my daughter. While she needs help getting ready for school and keeping track of her things, she can also sit and draw or read for hours. Other people have suggested she might need medication, which seems really scary to me.

Can you give me some insight and ideas for how to support her?

How to get fit and bond with your kids! 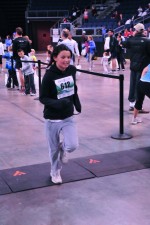 My daughter crossing the finish line. 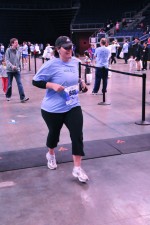 Me - huffing & puffing. But I finished!

I know many of us are strapped for time and feel like we are being pulled a million different directions.

When I step back and look at how I deal with a more than overfull schedule, it becomes clear that I handle things logically:

Are Basket Drawings Teaching Materialism or Teaching a Lesson?

In the spring, our school holds a basket drawing as their major fundraiser for the year. The basket drawing brings in thousands of dollars for the PTA.

Each class chooses two themes for their baskets – this year my daughter’s class did Star Wars and Monster High. The parents are then asked to donate items on the theme or money to the baskets. No one is forced to donate or participate.

The drawing is usually held on a Thursday, along with a pasta dinner and book fair. During the week of the big drawing, baskets are showcased in the main display cases and tickets are sold. Every student and staff member are given one free ticket to enter.

On the big night, winners’ names are drawn while everyone gathers in the gym.

There is a lot of excitement during the week and especially that night. The community comes together to support the school.