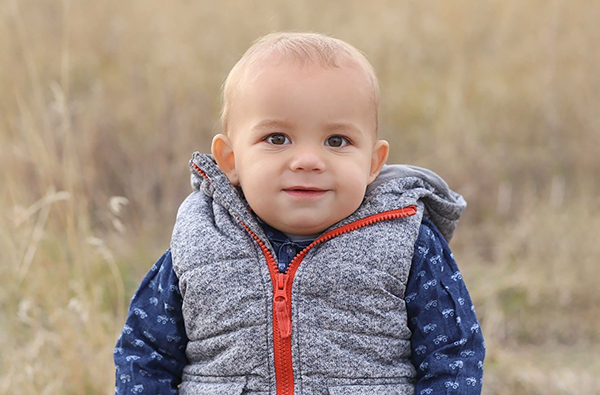 As an expecting parent, you’ve prepared for every part of your delivery from your “go bag” to your baby’s first outfit. But do you have a plan if something doesn’t go according to plan? If something unexpected happens to your baby during delivery or within the first few months of life, you want the best care for them. So let the team at Children’s Hospital Colorado provide a piece of mind.

Chase Juergens came out blue. His mother, Alicia, had a cesarean section, and the nurses said that wasn’t unusual. Sometimes cesarean-section babies take a little longer to catch their breath. They took him to the nursery for oxygen. Her husband, Michael, went with her.

“They were looking at his chest and it was almost concave,” Michael recalls. “His oxygen levels just weren’t getting up there.”

“He came back upstairs really emotional,” Alicia adds. “He was like, ‘There’s something wrong with Chase.'”

Chase had congenital diaphragmatic hernia, or CDH, a defect in which the diaphragm doesn’t form fully during development. Abdominal organs float up into the chest cavity, and babies like Chase are born with tiny, stunted lungs that can’t supply them with enough oxygen to survive.

A critical transition for CDH babies

Within an hour, Chase was airlifted to Children’s Colorado’s Level IV NICU, where a pediatric and fetal surgeon was waiting for him with a team of experts. They have extensive training and experience transitioning babies with CDH from the womb to the world, which is the most critical part of treatment.

It helps to have a prenatal diagnosis, which allows the family to deliver on a labor and delivery unit like the one at the Colorado Fetal Care Center, with specialists at the ready. Chase’s case, however, had gone undetected.

The experience to treat CDH, no matter how severe

Luckily, the Juergens family had one of the nation’s foremost CDH referral centers in their backyard. With more than 50 years experience, Children’s Colorado’s dedicated CDH team has treated hundreds of kids with the condition. That extensive experience translates to some of the best CDH outcomes anywhere.

Michael drove across town to meet the team while Alicia, still recovering, stayed behind.

“It was a wild experience I wouldn’t wish on any parent,” Michael says, “but seeing the level of unity on that team, how everyone was just staged and prepared and ready, that brought a lot of comfort to me.”

Timing the treatment of CDH

In the NICU, Chase’s care team soon determined his left lung was nearly intact. They supported him using a ventilation strategy robust enough to get him the oxygen he needed, yet gentle enough not to do any damage to his lungs. When the time was right, they repaired his diaphragm, giving his lungs room to grow.

“At one point during our stay, while we were getting ready to go home, a nurse mentioned that about 99.9% of these babies go home on oxygen,” Michael says. “It was almost like Chase heard that and went, ‘Watch this.’ They took him off oxygen the next day.”

At 18 days old, he went home without it.

Chase’s CDH was moderate, but it was our team’s experience with more complex cases that helped him have such a positive outcome.

“He’s pulling up and crawling, putting everything in his mouth. It’s fun,” says Alicia. “He’s the chunkiest, happiest little baby. You’d never know how sick he was.”

“We couldn’t have asked for a better outcome,” says Michael. “We call him our happy little miracle warrior.”

Children’s Colorado is here for you, no matter what. Feel prepared for life’s surprises.