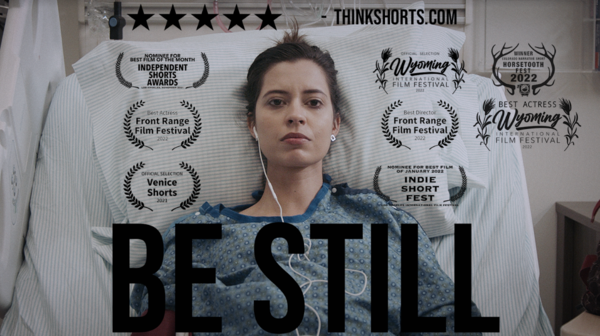 October 15th is Pregnancy & Infant Loss Awareness Day and a Colorado bereavement doula has co-released a film to help begin this conversation.

be still takes a thoughtful look at stillbirth and how grief manifests itself in the lonely and isolating world of loss. The  12-minute film has been met with critical acclaim, winning awards at many film festivals including at the Horsetooth International Film Festival and Wyoming International Film Festival. The film was recently released to the public in honor of Pregnancy & Infant Loss Awareness Month.

be still gives viewers insight into something that is often left undiscussed – child and pregnancy loss. Caroline learns in her third trimester that her baby has died in utero. What follows is a look at the grief and experiences a bereaved expecting parent faces in a world where this pain is misunderstood. Caroline and her partner begin a path of healing; allowing the support and resources around them to help be their guide.
The film is 12-minutes long and follows bereaved parents through their journey. To date, the film has been used for educational purposes for preliminary birthing professionals and medical providers to detail how profoundly parents feel about this kind of loss.
The film has now been released to the public and can be viewed for free at www.bestillshortfilm.com.
October is Pregnancy & Infant Loss Awareness Month, a month designed to raise awareness about baby loss and increase support for families who have experienced loss. This film is one of the ways Julianne Curtis has opened the door for conversation and understanding of this difficult subject.
Julianne Curtis is a Northern Colorado birth and bereavement doula. She is certified in trauma-informed care and is a certified lactation counselor. Additionally, she is trained in the following areas of expertise – childbirth and postpartum care.  She teaches classes at The Women’s Clinic of Northern Colorado, runs loss support groups at 3Hopeful Hearts, and serves her own clients. Julianne has supported families for more than a decade through life’s biggest joys and heartache. Ben Hess is the owner and creative director of Slyfox Cinematic. He produces commercial films for non-profits, private businesses, and government organizations, as well as music videos and short films such as be still. His work has earned him national recognition and many awards.