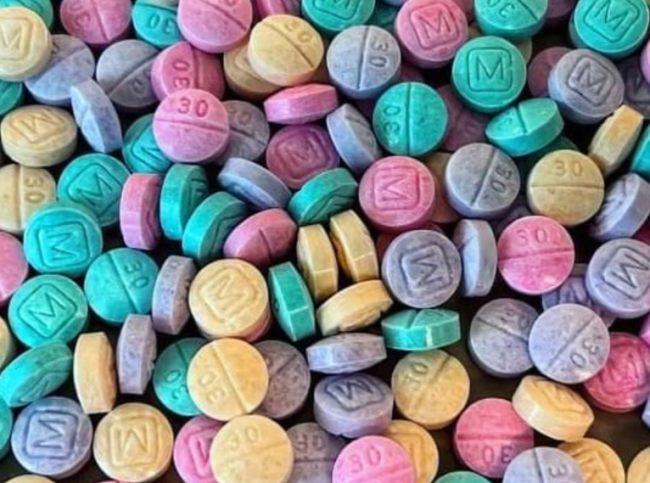 Rainbow Fentanyl: Looks like Sweet Tarts But This Opioid Kills

Let this be your sign to talk to your kids about FENTANYL.

I have taken the deepest dive into this drug epidemic lately – which was spurred on by my own curiosity, due to the sudden uptick my husband was seeing in his law practice. He’s a criminal defense attorney. And this shiz is so serious. The risk is real. Here are a few points I wanna share:

🍬Currently the new look of this drug is called Rainbow Fentanyl; shown here in this photo. Made to look eerily similar to Sweet Tart candy. Deliberately designed to attract kids/teens – especially since it appears so harmless & innocent.

🍬It has no smell & completely tasteless. Plus it CAN be absorbed thru the skin.

🍬As little as 1-2 milligrams can be fatal. For reference, this would be the size of a few grains of salt. Teeny-tiny.

🍬It can be easily cut into ANY pharmaceutical/party drugs & you’d never know until it’s too late.

🍬Nearly 50% of the illicit street drugs that have been confiscated by law enforcement in 2021-2022, were laced with Fentanyl.

🍬During the past few years, there has been enough Fentanyl seized to kill every person in the US.

🍬Right now in our country, Fentanyl is responsible for almost 70% of overdose deaths. Almost 1/4 of them are under 21. And drug use among teenagers hasn’t increased; in fact, it’s lower than its been in a decade. Lastly, among teenage overdose death in the 18 months, almost 80% is fentanyl-related.

🍬During my high school/college years, I had the luxury of experimenting with different drugs. I was a free spirit. And the big threat was possible addiction. Well now…it’s DEATH. Today’s kids can NOT test boundaries when it comes to drug use. ONE small lapse in judgment to “just try something” can take your child to their grave. We must start talking about this. Like now. Bring the conversation home. Then spread the word far & wide.