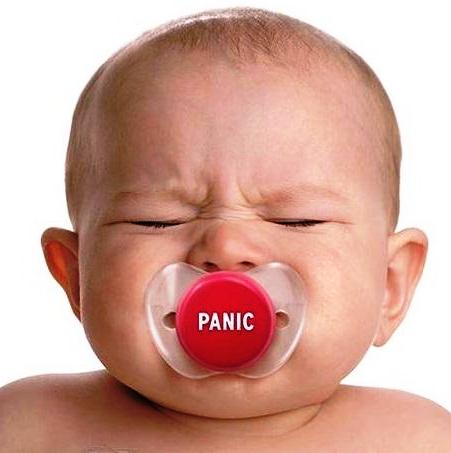 Pacified: Breaking the binky habit before it breaks you

Call it what you want. Binky. Pacifer. Paci. Soother. I call it a little cut of hell.

Sure, I loved Hadley’s pacifier when it quelled her cries but it was so traumatic breaking her of her habit that I wouldn’t let a binky go anywhere near Bode’s mouth when he was born.

And it was a 12-step program to make her quit.

Day 1: Jamie did the “snip-snip.” No, this is not in reference to the procedure he underwent when our child-bearing years passed. But rather, he snipped the end off of Binky. We then left it out in an obvious place and waited with baited breath as she approached. Predictably, she jumped right on it, as she often does when she makes a non-sleepytime Binky discovery. But after a few sucks, she took it out to observe, and then tried to put it in her mouth in a few different positions (sideways, backwards, etc.) She then made the proclamation “Broke” and threw it on the ground. We thought that was the end of it. We were wrong.

When it came nap-time, that is where the true levels of her addiction were revealed. Not only did she lay hysterically in my arms for almost two hours, she was just like a heroin addict going into withdrawals. Her entire body shaking, she screeched, “Binky, binky, binky” over and over again. It took everything that was in me to not give in as I kept picturing them mocking her at her High School Graduation ceremonies if she was still sucking on that thing.

Day 2: Nightmarish Nap-time Part II. Haddie makes her first suicide attempt. I put her in her crib after a half hour of snuggles and comforting her, with the resolve to let her cry it out. This seemed to be working. Until I heard the loud BAM! in the next room. I rushed in there and yep, she had launched out of her crib for the first time with a big ol’ goose egg to show for it. She claimed in no uncertain terms that life was not worth living if she couldn’t have Binky. There were no naps that day, either.

Day 3: Same pattern: snuggles, cry it out (with the prayer she would not launch out of her crib), only this time she went to sleep. Well, for only 15 minutes mind you. She started crying and though I was tempted to let her fuss it out, maternal instinct took over and I went in. She was covered from head-to-toe in her own vomit. Possibly part of the withdrawal program as she puked up 18 month’s worth of plastic inhalation? I spent the rest of the afternoon and evening cleaning up her incessant puke and diarrhea fest. Seven loads of laundry later, I passed out at the end of the night.

Day 4: Grandma Day. THANKFULLY. I was a nervous wreck and after going for a hike (a.k.a. Pregnant Lady Waddle) to relieve my stress, I spent the afternoon sleeping.

Day 5: Went down with little fuss and only asked for Binky periodically throughout the day.

Day 6: Finally only spoke fondly of Binky, like he was a dear, dear friend from her distant past.

A friend once shared the story of taking the paci away from her toddler. After a week, I asked her how it was going? “Bad,” she moaned. Two weeks later: “Worse,” she commiserated. By three weeks of crying and sleepless nights, she gave the pacifier back but with one caveat: she tied it on a string to the crib so her daughter could only use it to self-sooth during naptime.

At least that was the intention until she spotted her daughter sneaking in and out of her bedroom all day long so she followed her in. And watched. She went straight for the binky, took a few urgent, frenzied sucks and then walked away after she got her “hit.”

That, my friends is addiction. 15