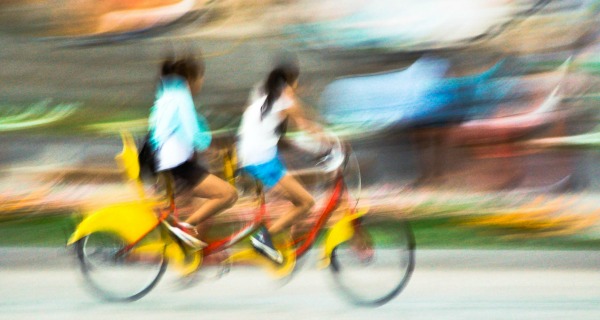 When my son Bode was little (33-pounds to be exact) I loved going for bike rides with him in his bike trailer.

It was one of those delightful early summer days and we started strong. Translation: we went downhill. My house is perched atop a hill that takes me about two minutes to ascend on my bike, 20 minutes when pulling Bode and about 2 hours with my then-40-pound daughter Hadley added to the mix.

There was a good reason I chose to do the ride when she was still in preschool.

Bode and I have a regular route through a nearby Open Space park. We often pass “Swiper” the Fox by a footbridge, “Daffy” Duck paddling in the pond and if we’re lucky, we’ll spot “Wile E.” Coyote perched under his favorite shade tree.

Our animal nomenclature is commercialization at its best.

That day, we were delighted to encounter many of our favorite animals as we cruised along the undulating landscape and marveled at the profusion of wildflowers starting to explode. All was going well–blissful, even–until our ascent up The Great Hill.

It was a warm day and I realized I wasn’t the only one who packed on a few pounds during winter. Turns out, Bode may not be fitting into his swim trunks anytime soon, either. We slowly crawled up the hill and upon reaching the apex, I encountered my neighbors and gasped, “First ride of the season but we did it and….”

“What? YOU LOST YOUR CROC? WHERE?”

I dubiously stared at him, hoping this was a 2-year-old’s idea of a sick joke. It wasn’t.

I had a few options. 1) Write off the $30 Croc as one of the many casualties of life. 2) Drag Bode back on the recalcitrant route. 3) Detach the bike trailer, dump him off with our neighbors and try to find the Croc by myself.

I chose #3. Even though it was the best of the three options, it wasn’t pretty. I was exhausted and going on a Croc Rescue Mission was the last thing I wanted to do. Worst of all? The Croc was tan-colored, not a delightful fluorescent that would have made it easily identifiable. After 30 loooong minutes, I found it perched atop another hill.

Because it would have been too easy for it to be nicely waiting for me at the bottom.

Bode was delighted to be reunited with his beloved Croc. He slipped it on his foot, gave me a charming grin and queried, “Go biking again, tomorrow?”