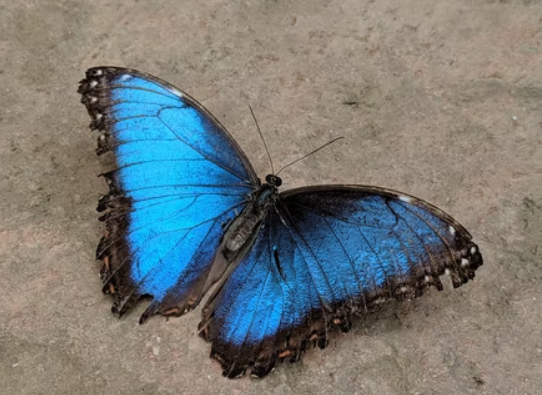 My daughter Hadley’s butterfly obsession began last summer when my parents bought her a butterfly net and book.

She was not quick enough to capture even one.

That’s why I wasn’t too surprised when she announced she wanted a butterfly kit for Christmas. It seemed like a brilliant strategy: if you can’t catch ‘em, why not grow your own?

My younger brother used to capture butterflies and watch them die, sending my sensitive heart into a tailspin at the thought of God’s beautiful creatures succumbing to my brother’s demonic Collection of Doom.

It is a long process to grow your own butterflies. The day after Christmas, we sent out our request for caterpillars and were promised they would be delivered in 2-6 weeks.

When our larvae finally arrived in a plastic case it took them another 10 days to evolve into chrysalides. Add two weeks more to that formula as we waited for them to emerge.

Hadley was wonderfully patient. Every day, she would report on their progress. We read books, watched YouTube videos and she prophesied what colors they would be.

The night before we were supposed to leave for a ski trip, It happened: the first butterfly started its metamorphosis.

You know. Because they couldn’t have had worse timing.

We called in reinforcements: our 8-year-old neighbor Sadie became our cat-turned-butterfly-sitter. When we arrived home three days later, nine more butterflies had emerged. Hadley was ecstatic and became a fantastic caregiver.

Until she announced 48 hours later when that she wanted to release them.

I patiently explained it was still winter and they would not survive the chilly temperatures. Our mother-daughter game of begging and refusing lasted all day. Exasperated, she finally blurted out,

And in that moment, something changed in her countenance.

“I’ve had my butterflies long enough. THEY MUST DIE TODAY.”

Remind me to always stay on her good side.