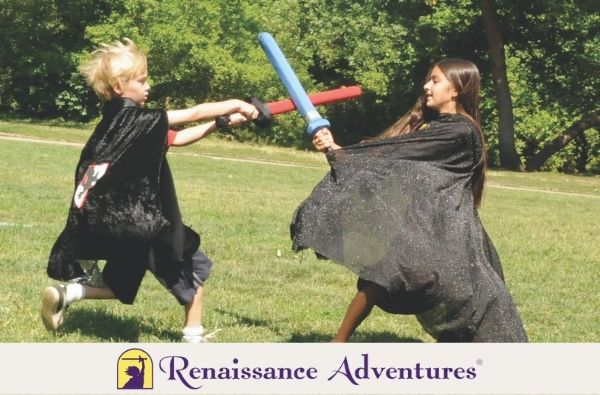 At Renaissance Adventure’s Quest Camps, children and teens become the warriors and wizards, the fairies and bards, that embark on an epic adventure looking to save the kingdom.  Each Adventure Quest week offers a new adventure taking brave travelers to strange and exciting lands where conflict has arisen. Every camper chooses an archetypal character as their persona to play out in the quest. Each character offers special skills to aid the group as they journey through their quest.

How will the problems be solved?  Perhaps a riddle must be answered, or a bullying ogre needs fending off. Maybe the questers must traverse a giant rope spider web to complete the task.  Participants might need to test their challengers with a duel using safe, foam swords. Wherever the adventure of the week takes them, participants battle through their obstacles together and emerge the heroes of the quest in an environment that teaches good sportsmanship, fair-play, and respect for others.

Camp Counselors, or as we call them, “Quest Leaders”, bring their own magic to the program.  We hire actors, Larpers (Live-Action Role-playing fans), and people who are great with kids.  Campers sometimes rank Quest Leaders by how well they can do different voices to bring the characters in the quest to life!  Quest Leaders undergo background checks, are First Aid/CPR certified, and participate in a rigorous training program.

Campers ages 6 to 17 join in the fun in Boulder, Denver, and Littleton.  Programs meet outside whenever possible using public parks and schools.

Where it all began:

Mark Hoge started Renaissance Adventures in 1995 after many years in the summer camp industry. As a boy scout and live-action roleplaying game enthusiast, Hoge combined his passions into a program he named “Adventure Quest”. What started as a small after-school enrichment program in Boulder, Colorado quickly grew into a well-loved community of kids and adults that create adventures together..

We deeply value creativity, authenticity, responsible empowerment, and self-expression. What we have discovered is that a heart-centered live-action roleplaying game for kids can spontaneously create a strong community where kids get to truly experience what it is like to make important decisions and succeed in the process while having an incredibly fun time!

Here’s What Parents Are Saying:

Incredibly creative staff who introduce serendipity into every quest, perpetuating the sense of magic for those children and adults who are on the verge of losing it. Ellen Greenhouse, psychologist

Best. Camp. Ever. Provides a safe, carefree, playful environment and loads of creativity and imagination — which should be the realm of all kids, especially during the summer! The Quest Leaders are fantastic. In my kids’ words, their leader was “amazingly, absolutely, positively, magically awesome!” RA has been their favorite summer camp, hands down, for 4 or 5 years now.  -Courtney, Parent