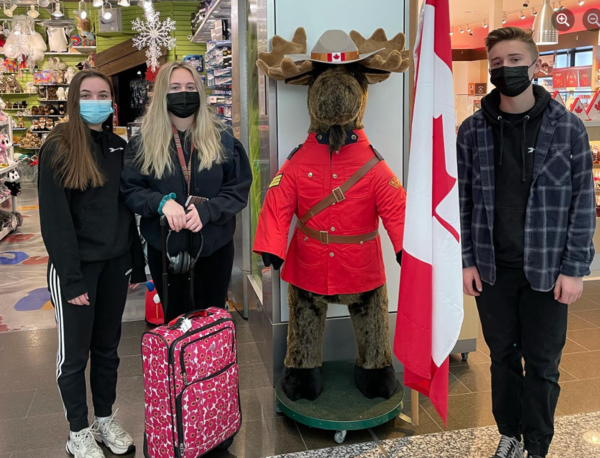 Travel during a pandemic is a privilege, not a right and we were incredibly grateful to finally see my family in Canada after three years. However. Omicron surges, airline staffing shortages and inclement weather made for the perfect storm with almost 5,000 canceled flights in 36 hours. As a travel writer, I’ve had some crazy travel days (sneaking into the Cairo airport and spending the night strapped to my luggage while a “security” dude with an AK-47 roamed the terminal is a favorite).
But this latest adventure felt right out of the Twilight Zone with Taliban rooms, Customs Groundhog Day, Swiss privilege and more. It’s long and I’m mostly writing it so I can look back in the future and laugh. Current status: We’re still crying.

The deets:
Arrived at Calgary airport 3 hours early (despite family protests) to give us extra time through U.S. Customs and security. Found out there was a 2-hour delay that caused us to miss our connecting flight to Denver (we were later flying to Salt Lake City to visit family).
We rebooked reconnecting flight with 2 separate United agents for the next morning and anticipated staying in Denver that night. Pretty standard stuff. We were just elated to get out of the country so we didn’t have to do all the stressful and costly COVID testing again. Spoiler alert: those agents lied.

And then we entered an alternate universe.

Agents herded the passengers through a back passage of the airport where we went through the time-consuming process of going through Customs and security AGAIN.
Finally boarded our flight five hours later. Found out those who didn’t arrive as early as us were pulled after security and were not allowed to go through U.S. Customs because the agents quit at 4 p.m. no matter the flight delays. Our fellow passengers were forced to wait in what they called a small purgatory room with no access to food and water for 2.5 hours.
Finally landed in Denver and were stuck on the tarmac because there were no available gates and we were forced to go through Customs a third time because half the flight had been in the Taliban room and hadn’t cleared Customs.
Assumed we’d overnight in Denver and fly out the next day. Until we found out our connection to SLC had been significantly delayed. An agent told us they were holding the plane for us and we had 15 minutes to race across the huuuge Denver airport and catch the train to another terminal.
I had about 50 pounds of carry-on and backpack luggage so that was fun.
We were forced to go through security a third time.
Sprinted to our gate at the very end of the terminal.
Flight was closed.
Checked luggage was somewhere in purgatory.
Husband waited in a huge line. No flights for 5 people for 3 days and zero car rentals in Denver. Most flights had been delayed or canceled. Standby was our only option.
Snagged nearby hotel, cab and meal vouchers for the saddest midnight Pizza Hut run ever.
Husband and Son took a separate cab directly to the hotel.
Meanwhile, a North Carolinian, Ethiopian, Canadian and Coloradoan walked into a cab and did a frigid tour all over tarnation.
When we arrived at the Hyatt Regency an hour later, Husband was at the front of a loooong line yelling at me to show my voucher because we literally had the last two available rooms (turns out a voucher doesn’t guarantee availability).
Cab driver overcharged (he had dropped off people all over Aurora and was mad when our voucher didn’t cover all of his detours). And madder I didn’t have cash. Son saved the day by handsomely tipping him.
Day 2 started out a lot like Day 1.
The girls slept for a few hours in an adjacent room while Son, Husband and I crashed next door. Husband’s meds were in our bag lost in outer darkness so he didn’t sleep a wink.
Our 5 a.m alarm didn’t go off. Husband woke us up at 5:07 a.m.
Son grabbed his phone and announced it was only 4 a.m. and the hotel clock was an hour ahead. And that he noticed it the previous night, thereby canceling out his previous good deed with the cabbie.
We arrived at DIA at 5:45 a.m. (security lines the fourth time in 24 hours hit a bit differently) and it was already crazy slammed, wall-to-wall with people who’d spent the night there.
Our standby strategy was that sleep-deprived Husband would be the first who’d fly out so he could do airport trips if we arrived on different flights. I would come last.
We waited at our gate, excited we were the first people on standby, then panicked when we noticed our Swiss exchange student Maelle wasn’t on the list.
And then got mad when we learned she was the only one with a confirmed flight. In First Class. SWITZERLAND ALWAYS WINS.

As other flights were delayed, seats started opening up and I was the last one on the plane, a standby miracle.
I was seated next to the restrooms. The back of the plane became a war room for animated travel disaster stories from the previous day (there were some doozies).
Our bag was waiting for us at the bag check office.
We got the very last hotel vouchers.
The Hyatt Regency overlooked the Colorado Children’s Hospital where a dear friend’s son had been admitted a few days prior. Perspective.
Maelle survived.
As we were in the throes of exhausted misery eating questionable pizza, Husband commented.
“Our family built for this. Maelle is not.”
She’s one of us now.