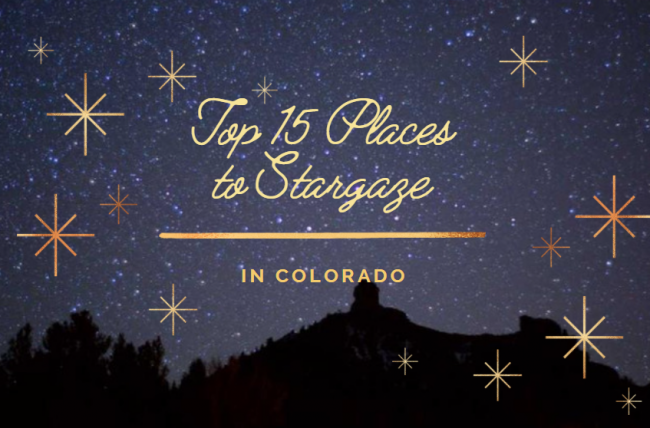 Top 15 places for Denver families to stargaze in Colorado

Did you know Colorado has so many awesome places to stargaze with your family in Colorado? Whether you lie under the heavens of the San Luis Valley, or get a little closer to the stars on the peak of a stately mountain, there is nothing like seeing constellations speckled across a clear Colorado sky. Colorado.com shares these 15 places to stargaze in Colorado.

One of the newest addition to the International Dark-Sky Association’s list of Dark Sky Parks for its “exceptional natural darkness,” this gem in the far northwest corner of the state hosts ranger programs and night hikes to get visitors deep into the dark. There are also many prime places to view the night sky with either the naked eye or telescopes and binoculars. Until now, the monument has been most famous for the epic whitewater rafting found on the Dinosaur and Yampa rivers, as well as incredibly preserved dinosaur fossils and Fremont culture rock art. Getting There: Located on the Colorado and Utah border, the monument is a two-hour’s drive north of Grand Junction via State Highway 139. 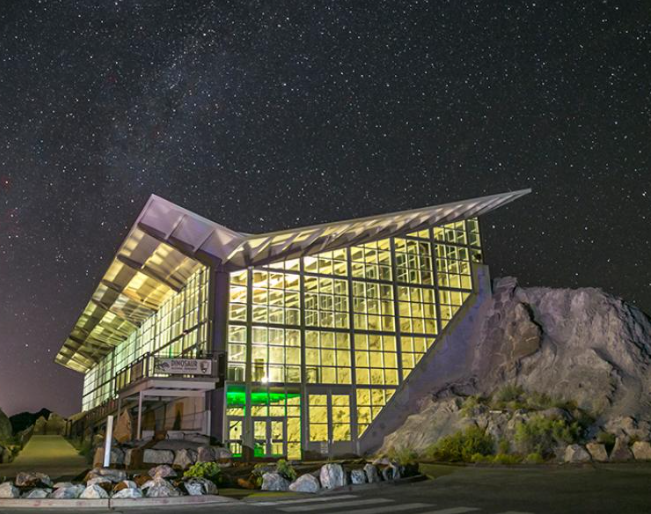 GARDEN OF THE GODS ROAD

Garden of the Gods in Colorado Springs is located far enough from city lights for a lucid view of nature’s fireworks. The snow-capped white summit of Pikes Peak seems to glow in the dark, set against a backdrop of silhouetted boulders and some of the galaxy’s most beautiful stars. Take in deep breaths of fresh air, lean back and let the constellations captivate you. And when daylight breaks, take in views that are just as gorgeous as they are at night, as the striking red rock formations seem to pierce the blue sky. Getting There: Located just off I-25 at the Garden of the Gods Exit, 1805 N. 30th St., Colorado Springs.

This national park near Alamosa is already otherworldly during the daytime; at night, it’s easy to imagine you’re on another planet. It’s also one of the only wild places in the world where rangers encourage self-guided exploration … in total darkness! To take a gorgeously surreal night-hike without the aid of a ﬂashlight, plan your visit during a full moon. You may be treated to glimpses of the local wildlife, including owl, kangaroo rat, coyote and even bobcat. If you’re more interested in sky than sand, go during a new moon instead; pick up a free star chart and moon calendar at the visitor center. A variety of guided programs are also available during the summer — check the night sky program schedule prior to your visit. Getting There: Located at 11999 Highway 150, Mosca.

Plenty of rest stops along County Road 38E near Fort Collins have picnic tables overlooking the reservoir below. Since not many cars pass by at night, you’re offered an uninterrupted view of sparkling skies. If you’re in the mood for a bit of a hike with a fabulous ending, head to the top of Horsetooth Rock — a bizarre rock formation that resembles an actual horse’s tooth — for a view of the city on one side and the rugged mountains, Horsetooth Reservoir and the stars on the other. Getting There: Located on County Road 38E past Taft Hill Road.

At the UFO Watchtower in Hooper, you are in for more than just stargazing. Locals claim the San Luis Valley is a hotspot for alien activity, and dozens of unexplained flying object sightings are rumored to have occurred at this locale since 2007. At the watchtower, there’s little or no light competition obstructing your view — so it’s just you, the stars … and perhaps the occasional extraterrestrial flying by. The watchtower offers information on past “encounters” and theories behind the sightings. Come see for yourself. Maybe you’ll be one of the lucky ones. Getting There: Located at 2502 County Road 61, Hooper. Find 15 fun and quirky roadside attractions in Colorado.

The rugged landscape of Curecanti, between Gunnison and Montrose, is a necessary beauty for everyone to experience. Come here on a clear night, and you’ll be certain to witness plenty of distant planets, stars and faint stardust — a glowing cloud of stars too far away to be separated by the naked eye. If the water is still, you may even catch a glimpse of the Milky Way in its reflection. Three sprawling reservoirs mark the heart of Curecanti, beginning with Colorado’s largest body of water (Blue Mesa Reservoir), followed by Morrow Point Reservoir at the entrance to the Black Canyon of the Gunnison National Park and the East Portal. A location as vast and unpopulated as this is a rarity. Getting There: Located at 102 Elk Creek, Gunnison.

Jackson Lake State Park near Fort Morgan in northeastern Colorado is one of the most scenic places to watch the Colorado sky. It was named an International Dark Sky Park in 2020, making it the first Colorado State Park to hold the coveted designation. With its large, glassy surface, the lake acts as the perfect mirror for the Milky Way. Known as “the oasis in the plains,” this park has been ranked as one of the top 15 park beaches by Reserve America. The peaceful silence of the evenings, the sandy beaches and the breathtaking view of the stars at Jackson Lake are enough to clear even the most occupied mind. Getting There: Located at 26363 County Road 3, Orchard. 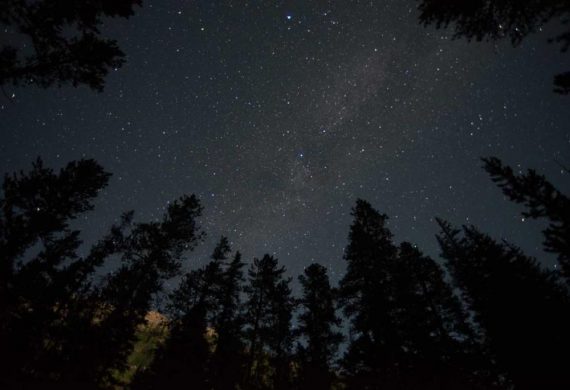 Not only is this all-natural amphitheater in Morrison one of the world’s most desired music venues for bands, it’s also a beautiful place to spend an evening stargazing. With its panoramic view of the city of Denver beyond and the solitude of a mountainside setting, Red Rocks is truly a gift of nature. The best time to catch the stars is during one of Red Rocks’ summer concerts or Film on the Rocks. Getting There: Located on West I-70 just past the Morrison Exit 259.

Q: What’s more breathtaking than a Colorado summer-night sky? A: A summer-night sky in Rocky Mountain National Park, where the stars become a glittering canvas framed by the park’s world-famous topography. Throughout the summer, a dedicated team of rangers (accompanied by volunteer astronomers) leads a variety of special after-dark programs, including Astronomy in the Park and Stories Behind the Moon and Stars. And in July, the park hosts its pinnacle stargazing event, the Rocky Mountain National Park Night Sky Festival: three days of ranger-led daytime activities, educational talks and nighttime viewing. Getting There: Enter through the gateway towns of Grand Lake (west side) or Estes Park (east side).

Prefer your constellations with a side of civilization? Located about an hour west of Pueblo, the two towns of Westcliffe and Silver Cliff recently became the first communities in Colorado to be recognized by the International Dark-Sky Association. Not surprisingly, the area is home to many passionate stargazers; soon after receiving certification, the community constructed the Smokey Jack Observatory, where visitors can absorb the full impact of an unobstructed Milky Way through a fancy-schmancy, computer-guided Schmidt-Cassegrain telescope. The local International Dark-Sky Association chapter also hosts a series of Star Parties throughout the summer. Getting There: 115 S Adams Blvd., Westcliffe (Smokey Jack Observatory).

Surrounded by some of the most rugged and majestic Rocky Mountains, Trinidad’s Monument Lake offers a great place to look at the stars. Known as southern Colorado’s Jewel of the West, the area’s crisp, mountain air and unparalleled views of the Sangre de Cristo Mountains create ideal locations to step away from the clutter and commotion of the city. Getting There: Located west of Trinidad on scenic Highway 12/Highway of Legends west for 35 miles.

You’ll have no problem satisfying your nocturnal pursuit of Cassiopeia or the Big Dipper when you situate yourself next to Grand Lake. Aside from the charming atmosphere of the town of Grand Lake, very minimal light stands in the way of ideal stargazing, making any view a good one. During the winter months, ice skate under the stars at Devil’s Thumb Ranch or try night skiing at Ski Granby Ranch. It’s hard to beat the number of stars you’ll see on your lift ride up the mountain. Getting There: Located at 3530 County Road 83, Grand Lake.

By day, Chimney Rock National Monument, located at the southern edge of the San Juan Mountains in southwest Colorado, is a breathtaking blend of nature and culture. Amid the windswept forest, the archaeological ruins and ancient artifacts of the Chaco culture have remained largely unchanged for 1,000 years. By night, ancestral wisdom and modern telescopic technology meet — with unique Night Sky Archaeoastronomy Programs ideal for visitors of any age. During the two-hour programs, visitors of all ages learn how the Chaco people used the stars for navigation, timekeeping and spiritual guidance. Getting There: 3179 Highway 151, Chimney Rock.

Bordered by the vast open spaces of western Colorado near Montrose and Gunnison, Black Canyon of the Gunnison National Park has always been a phenomenal place to see the stars. In 2015, the canyon received the International Dark Sky Park designation, officially making it one of the best places in the world to go off-grid for a few hours. The Black Canyon Astronomical Society, in partnership with other local star-gazing groups, conducts nighttime programs throughout the year — using both telescopes and the naked eye — with experienced astronomers and astro-photographers on hand to assist visitors in the darkness. Getting There: Located 7 miles north on Highway 347 from the intersection of Highway 50 east of Montrose (South Rim) or 11 miles southwest of Crawford off Highway 92 on Black Canyon Road (North Rim).

This San Juan Mountain beauty in Silverton sits along the scenic Million Dollar Highway (a million dollars’ worth being the price of the views), and is the ideal respite for a bit of Milky Way-canopied solitude. By day, you’ve got the sharp pinnacles of the surrounding peaks, the fish-stocked lake (which also mirrors those peaks to breathtaking effect) and access to miles and miles of hiking trails. The Molas Lake Campground has a handy general store and other amenities but is missing one important one for the stargazer’s purpose: electricity. The area is nice and dark to assist with this starstruck adventure.

These programs can guide you to the best spots for staring up.