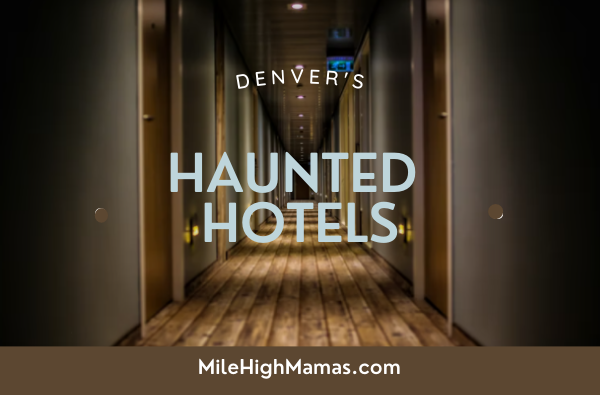 Spooked! These 5 haunted Denver hotels will give you a scare

Want to get spooked? These Denver haunted hotels boast spooky histories and if you’re lucky, ghostly apparitions, faucets turning off and on, flickering lights, and eerie sounds for your stay. Visit Denver shares Denver’s best-haunted hotels.

Well known as the inspiration for Stephen King’s classic horror novel “The Shining,” this Estes Park hotel is regularly featured as one of America’s most haunted hotels. In 1911, chief housekeeper Elizabeth Wilson was involved in an explosion that blasted her through the floor into a room one story below. The location of the explosion was repaired and converted into Room 217, the same room King visited when writing “The Shining.” Guests staying in Room 217 often report unwanted housekeeping services, including having items put away or unpacked despite no housekeepers having been by. No living housekeepers, anyway!

But it isn’t just room 217. Most of the rooms in the hotel have had haunted experiences, including items that seem to move by themselves and lights that turn on and off. In fact, the entire fourth floor of The Stanley Hotel (formerly the servant quarters) is quite active. Often, the sound of children playing in the halls of The Stanley can be heard — even when no children are present.

Shortly after the current owner of the Lumber Baron purchased the rundown mansion, he described it as a “haunted house on a movie set.” Known around the neighborhood as the “haunted castle,” the Queen Anne-style mansion was the site of a 1970 murder of two young women. Paranormal activity is a weekly occurrence at the Lumber Baron, with reports of strange voices, furniture moved in rooms, windows closing and cold spots throughout the property. Visions have been reported of a woman in a flapper-style dress holding champagne, followed by a rush of cold air. The pyramid-shaped roof atop the third floor was supposedly built as a portal to another dimension. Guests can tap into the great beyond during the inn’s Magical Tea, a traditional high tea that also includes Victorian card reading, divination, spell candles and crystal prescriptions.

Denver’s oldest boutique hotel, The Oxford, is located in the trendy LoDo neighborhood and offers top-notch amenities and a luxurious spa. This 123-year-old hotel is also known for its haunted past, from tales of locked bathroom stalls to sinks that turn on and off during the night. But the real mystery lies behind the door of Room 320. In 1898, a woman named Florence Montague shot and killed her lover before taking her own life in that room. Since then, single male guests who stay in Room 320 have reported sheets being ripped off the bed and their arms being pulled by an unseen force. But the unexplained terror doesn’t end there.

The hotel’s Cruise Room bar is known for its martinis, its iconic Art Deco style — and a mysterious postal worker. Bartenders routinely report a man walking into the bar wearing an old post office uniform. He always orders a beer before muttering “the children, I have to get the gifts to the children.” Then he appears to drink the beer and leave. However, when the bartender picks up his bottle, it’s always full. Research has revealed a story of a postal worker from the 1930s who was on his way to deliver Christmas presents to nearby Central City, but the gifts were never delivered. That spring, his decomposed body was found on the way to Central City with all of the Christmas gifts still with him. That single beer at the Cruise Room may have been his last, and it may explain why he keeps coming back for one last sip.

Downtown Denver’s Brown Palace opened its doors on August 12, 1892. For more than a century, the luxurious hotel and spa has stood as an anchor to the city’s bustling financial and cultural district, playing host to presidents, prime ministers and celebrities.

The Brown Palace Club, a triangular space that once served as campaign headquarters for Dwight D. Eisenhower and as a private gentlemen’s club, is the source of more spooky stories than any other part of the building. Examples include reports of lights that turn on and off by themselves and of carpet that crawls underfoot like something alive. Often spotted in the Club entryway or just outside of it is a man in a dark suit or uniform and a cap. Witnesses have described him as looking like an old-fashioned railroad conductor. When approached by the living, this specter silently retreats to the ground floor and into the corner wall of the hotel. When the hotel first opened, the ground floor was encircled by retail shops and businesses, including the Rock Island Railroad ticket office in that same corner.

“The Castle Project” is a documentary about the haunted history of the Patterson Inn in Capitol Hill, formerly known as the Croke Patterson Mansion. Filmmaker Brian Higgins documents workers as they transform the 124-year-old mansion into a modern bed and breakfast. Most of the workers are initially skeptical of ghosts, but after encountering apparitions, whispering voices and peculiar odors, they quickly realize they may not be alone in the house.

Built in 1890 by Thomas B. Croke, the red sandstone mansion is 14,000 square feet of elegant beauty. It is also said to be one of the most haunted buildings in Denver. Croke only owned the mansion for two years, after which he sold it to Thomas M. Patterson. Despite the mansion’s long history, it wasn’t until the 1970s that people began to experience strange occurrences. During renovations to the property, construction crews began to notice the work they had done the day prior was always in disarray when they returned. Thinking this the work of vandals, they left a pair of guard dogs to monitor the property overnight. When the workers returned the following day, both dogs were found dead on the sidewalk, having jumped from the third-floor window.

Today, the mansion has been transformed into an exquisite bed and breakfast with modern luxuries and amenities. But the presence of paranormal activity may still remain within the walls of the old mansion, and guests may want to think twice before taking a tour of the cellar, as some say that the spirit that haunts the old mansion is that of a little girl who is buried deep in the basement floor. Sleep tight!