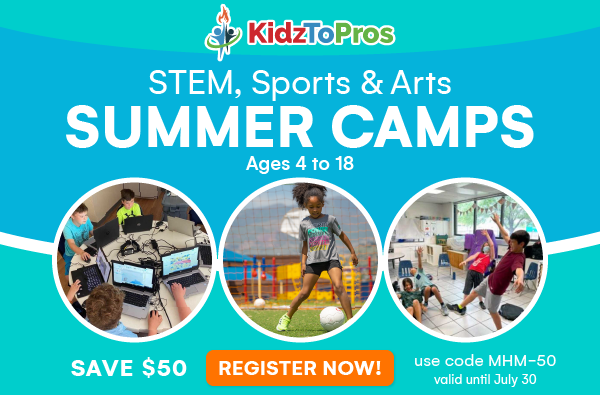 Denver Summer Camps You Don’t Wanna Miss (get $50 off!)

Summer is already underway, and more than 1,500 kids have participated and enjoyed KidzToPros camps in Colorado. Parents and kids agree – camp is a fun and enriching way to learn new skills or master existing ones. Camps in Denver, Colorado Springs and Boulder are still available until the end of July.

Are your kids interested in learning about robots, then spending afternoons playing fun sports and activities?

Are your kids interested in designing and building creative projects?

Makerspace shows how things work, how they are made, and where good ideas come from. Campers get comfortable in a STEM environment. In Makerspace: Games & Toys, they combine imagination with real-life considerations to customize each project. Kids build fun projects such as arcade-style games and catapults. In Makerspace: Vehicles & Structures, campers learn basic principles of engineering behind the objects they see in real life. They design and create actual projects such as cars and bridges while developing creative, interactive, and critical thinking skills.

Do your kids enjoy performing for audiences?

In Improv Comedy: Scene Work, campers think on their feet, react to changing dynamics, create artful characters and learn that teamwork is the nature of scene work. They cooperate to tell stories together in shared universes with invisible props, keep moving to tell original stories and shine in their own performances.

Do your kids want to learn game design and coding, and create multiple custom projects?

In Python, campers create interactive games, learn how to import libraries to expand their capabilities and cover the basics of Python, one of the fastest-growing programming languages. They also learn data types, recursion, and conditionals, as well as how to plan and execute projects during Week One. Go deeper with data structures, recursion, class inheritance, and game logic during Week Two.

In KidzToPros Unity Game Design camps they create games and experiences in both 2D and 3D. While practicing the basics of Unity using the C# scripting language, they’ll learn player movement with coding, vectors and simple physics during Week One. Then create a first-person, customizable game during Week Two.

Do your kids love creating their own beats, samples and songs?

In Music Production, campers enjoy an exciting week of creating digital music. They’ll learn powerful digital tools that make music production accessible for all, play with beat makers, learn to digitally keep time, tempo and pitch. While they record, sample, and edit they explore different genres of art and music and perform for an audience.

Are your kids playing tennis?

KidzToPros has a camp where tennis players improve coordination, concentration, focus, and independence. They develop a strong foundation in the fundamentals and formation of key tennis strokes while also learning racquet control and footwork drills for the forehands, backhands, approaches, volleys, and serves. Practice overheads and serves, while staying mentally and physically engaged.​

No matter the camp or skill, kids learn and improve their abilities throughout the experience. All while making friends and having fun. Click here to learn more about these popular KidzToPros camps now.