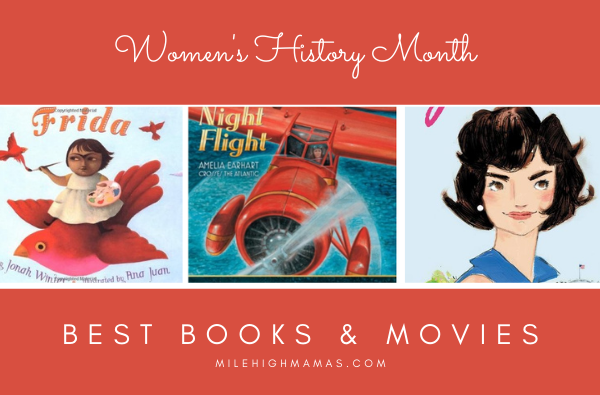 Women have been there making history from the very beginning of the world. However, if you flip through a typical history book, you might think, as historian Gerda Lerner once wrote, that “ostensibly one-half the human race is doing everything significant and the other half doesn’t exist.” March is Women’s History Month and we are here to share books and movies every Denver girl should read or watch.

Far too often, women’s contributions have been neglected in history books and school curriculums — fortunately, there are growing numbers of wonderful books and movies being made for young readers about girls and women who made their mark on history. And, there’s no better time to share these stories and make sure that the next generation — girls and boys alike — appreciates the important and diverse roles that women have played in history! 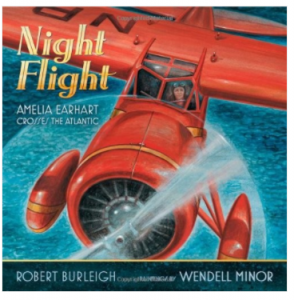 Award-winning author Robert Burleigh has captured Amelia Earhart’s first solo flight across the Atlantic in 1932. She was only the second person to do this – and the first woman. Rich in detail, feeling and incident this is nonfiction with edge and action, a you-are-there experience made more dramatic and real by Wendell Minor’s vivid paintings.

A stunning and inspirational nonfiction picture book about the life and style of Jacqueline Kennedy Onassis from Margaret Cardillo and Julia Denos, the team that created Just Being Audrey. This nonfiction picture book is an excellent choice to share during homeschooling, in particular for children ages 4 to 6. It’s a fun way to learn to read and as a supplement for activity books for children. Jackie Kennedy was an American icon of style and grace—but there was steel under that style. Her poise under fire, intelligence, and tireless work as First Lady earned her the respect of leaders worldwide and made her beloved by generations. 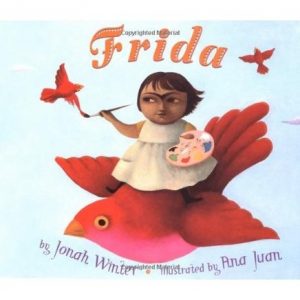 From a young age, Frida Kahlo found an escape from the troubles of her life by painting. Her father’s lessons in brushwork proved invaluable, first when polio left her bedridden for nine months and then again when a bus accident left her in constant, severe pain. But in her art, with its vivid colors and folk icon inspiration, she found freedom and joy. This poetic tribute to Kahlo from author Jonah Winter is accompanied by stunning illustrations from artist Ana Juan.“Frida shows us a girl who finds a way to be happy despite great difficulty, and becomes a woman whose art touches people around the world. In the hands of Jonah Winter and Ana Juan, this seems a grand accomplishment, worth celebrating.” (The New York Times Book Review) 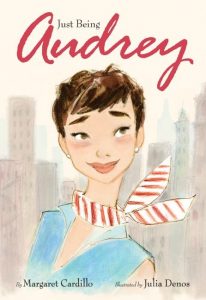 From Roman Holiday to Breakfast at Tiffany’s, when Audrey Hepburn starred in a movie, she lit up the screen. Her unique sense of fashion, her grace, and, most important, her spirit made her beloved by generations. But her life offscreen was even more luminous. As a little girl growing up in Nazi-occupied Europe, she learned early on that true kindness is the greatest measure of a person—and it was a lesson she embodied as she became one of the first actresses to use her celebrity to shine a light on the impoverished children of the world through her work with UNICEF. 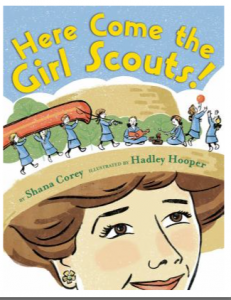 Juliette Gordon Low — Daisy to her friends and family — was not like most girls of the Victorian era. Prim and proper? Bosh! Dainty and delicate? How boring! She loved the outdoors, and she yearned for adventure! Born into a family of pathfinders and pioneers, she too wanted to make a difference in the world — and nothing would stop her.

Combining her ancestors’ passion for service with her own adventurous spirit and her belief that girls could do anything, she founded the Girl Scouts. One hundred years later, they continue to have adventures, do good deeds, and make a difference! 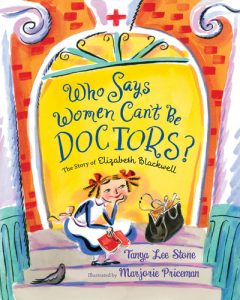 Who Says Women Can’t Be Doctors?: The Story of Elizabeth Blackwell

In the 1830s, when a brave and curious girl named Elizabeth Blackwell was growing up, women were supposed to be wives and mothers. Some women could be teachers or seamstresses, but career options were few. Certainly, no women were doctors.

But Elizabeth refused to accept the common beliefs that women weren’t smart enough to be doctors, or that they were too weak for such hard work. And she would not take no for an answer. Although she faced much opposition, she worked hard and finally—when she graduated from medical school and went on to have a brilliant career—proved her detractors wrong. This inspiring story of the first female doctor shows how one strong-willed woman opened the doors for all the female doctors to come. 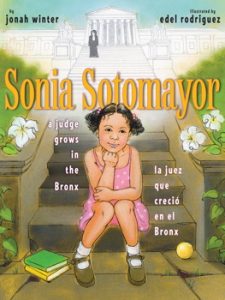 The inspiring and timely story of Sonia Sotomayor, who rose up from a childhood of poverty and prejudice to become the first Latino to be nominated to the US Supreme Court.

Before Supreme Court Justice Sonia Sotomayor took her seat in our nation’s highest court, she was just a little girl in the South Bronx. Justice Sotomayor didn’t have a lot growing up, but she had what she needed — her mother’s love, a will to learn, and her own determination. With bravery she became the person she wanted to be. With hard work she succeeded. With little sunlight and only a modest plot from which to grow, Justice Sotomayor bloomed for the whole world to see. 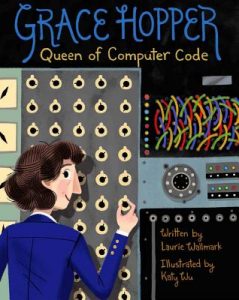 Who was Grace Hopper? A software tester, workplace jester, cherished mentor, ace inventor, avid reader, naval leader–AND rule breaker, chance taker, and troublemaker. Acclaimed picture book author Laurie Wallmark (Ada Byron Lovelace and the Thinking Machine) once again tells the riveting story of a trailblazing woman. Grace Hopper coined the term “computer bug” and taught computers to “speak English.” Throughout her life, Hopper succeeded in doing what no one had ever done before. Delighting in difficult ideas and in defying expectations, the insatiably curious Hopper truly was “Amazing Grace” . . . and a role model for science- and math-minded girls and boys. With a wealth of witty quotes, and richly detailed illustrations, this book brings Hopper’s incredible accomplishments to life.

Shark Lady: The True Story of How Eugenie Clark Became the Ocean’s Most Fearless Scientist

This is the story of a woman who dared to dive, defy, discover, and inspire. This is the story of Shark Lady. Eugenie Clark fell in love with sharks from the first moment she saw them at the aquarium. She couldn’t imagine anything more exciting than studying these graceful creatures. But Eugenie quickly discovered that many people believed sharks to be ugly and scary ― and they didn’t think women should be scientists. Determined to prove them wrong, Eugenie devoted her life to learning about sharks. After earning several college degrees and making countless discoveries, Eugenie wrote herself into the history of science, earning the nickname “Shark Lady.” Through her accomplishments, she taught the world that sharks were to be admired rather than feared and that women can do anything they set their minds to. An inspiring story by critically acclaimed zoologist Jess Keating about finding the strength to discover truths that others aren’t daring enough to see. Includes a timeline of Eugenie’s life and many fin-tastic shark facts!

Moana may be a children’s movie, but you don’t have to be a child to think it rocks—or to notice the feminist undertones. After all, Moana took it upon herself to save her whole village, sailed a boat—for the first time ever, might I add!—across the ocean, insisted that the demigod Maui (aka Dwanye “The Rock” Johsnon) join her, and helped restore the heart of Te Fiti when The Rock couldn’t get the job done. In the end, Moana is all about showing girls that with determination and resilience, they can do whatever they set their hearts to.

A League of Their Own

If you need to be convinced of the cultural significance of A League of Their Own (besides the fact that it stars Tom Hanks, Geena David, and Madonna), the film had such an impact that it’s actually been preserved by the Library of Congress. Following the journey of the All-American Girls Professional Baseball League during World War II, the movie illustrates the depth and layers of femininity and the importance of female friendship —and also shows that you can still make a movie about women without centering it on a romance. Plus, that one catch by Geena Davis is cool as hell.

While mainly centered on the Civil Rights Movement and racial relations throughout the 1960s, The Help showcases a myriad of incredibly brave and trailblazing women. The film follows several young white socialite women and their relationships with their African American maids. When one young white journalist, played by Emma Stone, decides to write an exposé on the racism the maids endure every day, there unfolds a plot rich with lessons on female courage, integrity, sisterhood, and determination to do what’s right.

While the male brains at NASA were hard at work racing against Russia to put a rocket man in space before their Soviet adversary, there were three brilliant African-American women crunching the numbers and doing the math that would actually get him there. Their names were Katherine G. Johnson (Taraji P. Henson), Dorothy Vaughan (Octavia Spencer), and Mary Jackson (Janelle Monáe). And now, thanks to this Oscar-nominated film, these American heroes will never ever be forgotten.

What starts as a romantic comedy, Legally Blonde quickly evolves into a story about a woman shattering expectations and carving out her own path for success, despite constant criticism and rampant sexism. Elle Woods completely reverses the stereotype of the dumb blond sorority girl that she’s supposed to be, proving that how you look and what other people think about you should never stop you from chasing your dream—or solving a murder. You’re welcome, Ali Larter.

Patty Jenkins’s Wonder Woman stars a badass Gal Gadot as the namesake DC Comics superhero whose advocacy for feminism is illustrated on-screen with a warrior princess who fights against the shackles of man with strength, courage, and her golden Lasso of Truth. A box-office smash that scored more than $100 million on opening weekend—a record for a female-helmed film—it’s definitely the antidote to toxic masculinity Wonder Woman’s original creator imagined her to be.

Feminism isn’t all “women can do anything men can do”—it’s women can do whatever the hell they want to do. And for the protagonist sisters in Gillian Anderson’s adaptation of Louisa May Alcott’s novel, that means a writer, a musician, a housewife and a free spirit. There are so many versions of this; most are great!

Disney has a way of making us feel like pawns in a game of Let’s See How Hard We Can Make Them Cry. But that’s not the case with Mira Nair’s feel-good drama about a Uganda girl’s path to chess champ, adapted from an ESPN sports essay. Moms and dads, you want your daughters to grow up to be chess champions.

In the film, set in the Scottish Highlands during the Middle Ages, a skilled archer named Merida defies an age-old custom, causing chaos in her kingdom and angering her mother, Elinor. After consulting a witch for help, Merida accidentally curses her mother and is forced to undo the spell herself before it is too late

What are your favorite books and movies that celebrate female empowerment?