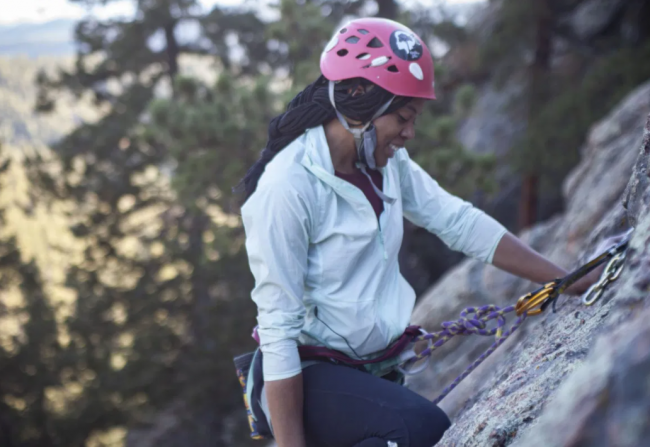 Photo: Brittany Leavitt of Brown Girls Climb at the top of the newly bolted route, tentatively called Patterson’s Pitch. The route was named after Mary Jane Patterson, the woman who is presumed to be the first African-American woman to receive a Bachelor’s degree.

Staunton State Park, southwest of Denver, has a new sport climbing route. That’s the kind of rock climbing route with anchors permanently bolted into the rock so that climbers can clip in with carabiners for protection as they go. The folks who set that route are on a mission to make rock climbing more inclusive.

Alan Prehmus is a longtime volunteer with the park and has been setting routes since he moved to Colorado in the 90s.

He also wants to see challenging routes made safer for people of all body types, not just the stereotypical lanky guy who can reach a long way to the next anchor. He recalled recently watching several women climb a route far beyond his own ability.

“The first woman to give it a try got through the hard part, and then there was a 12-foot gap between bolts. She looked at that gap and said, ‘I’m not doing that,’” he said.