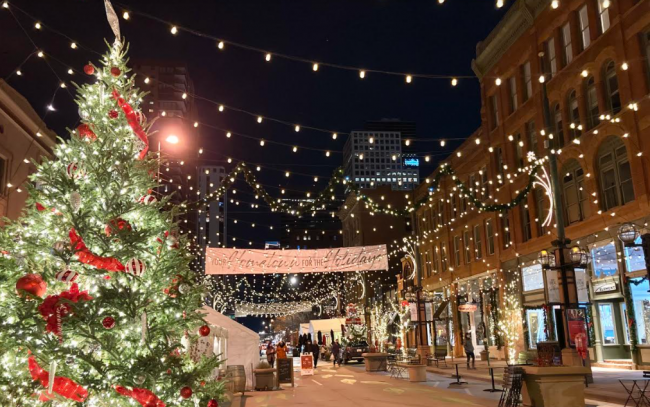 Love Denver? This Discovery and Exploration Guide is for you!

Do you love Denver?

Essential Denver: Discovery and Exploration Guide is written in a unique style by Denver native Lisa J. Shultz. A few years ago, she decided to plunge into walking neighborhoods and revisiting landmarks of the city. In her youth, she went on school field trips to visit the Capitol, the Mint or the Natural History Museum. Her mom occasionally took her downtown to shop at the iconic department store May D&F, visit the Art Museum, see a theater production or eat at a restaurant in Larimer Square. But gradually Lisa’s excursions downtown became less frequent because the downtown area underwent a transformation that made it less appealing to visit.

In 1967, voters approved the Skyline Urban Renewal Project. This proposal gave permission to demolish 120 acres of the downtown area to build shiny new skyscrapers. Suddenly, beautiful buildings were razed and became parking lots for years until they were gradually developed. Denver lost much of its character and appeal. Furthermore, suburban shopping malls became popular in the 1980s and most shopping shifted away from downtown. Lisa, as well as many suburban dwellers, gravitated to the new malls being built.

An article in The Denverite on May 17, 2017, entitled, The destruction and rebirth of 30 blocks of downtown Denver in six images, dramatically shows the changes to Denver after renewal had taken its course. With all the demolition underway, it became less appealing to spend time downtown. 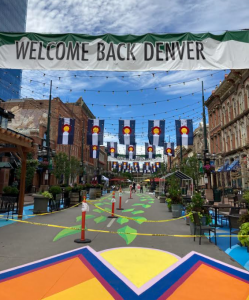 Fortunately, not all the charm and character of downtown was erased. Larimer Street was the original downtown Main Street in Denver’s early days. Today, many newcomers to Denver as well as tourists have visited Larimer’s oldest block called Larimer Square and enjoyed shops, restaurants, and events. Many people may not know how close this block came to demolition. In 1965, Denverite Dana Crawford saved Larimer Square by forming an investment group and buying up most of the block to preserve it. Crawford’s zeal for preservation extended to Lodo, the Union Station neighborhood, the Oxford Hotel and much more. She was inducted into the Colorado Women’s Hall of Fame for “Saving the Soul of Denver.” The Crawford Hotel within Union Station was named in her honor for preserving and revitalizing downtown Denver. Crawford, now 89, deserves much credit and recognition for how we enjoy Denver today.

Thankfully, some older buildings survived demolition and were transformed into other entities. For example, the Colorado National Bank building at 918 17th St. was a bank until 2007 and was then converted into the Renaissance Denver Downtown City Center Hotel. Old bank vaults can be viewed in the lounge overlooking the lobby and sixteen large murals entitled “Indian Memories” surround the lobby. Other hotels like The Brown Palace Hotel and The Oxford Hotel give one a glimpse of the old Denver as well.

Fortunately, if one knows where to look, the remaining treasures of old Denver can be preserved and appreciated. Also, there are many gems that have come to Denver in recent years. New museums, sports venues, and public art add a modern touch to the city. Despite the devastating effects of Covid shutdowns and boarded-up windows of many parts of Denver, there is still much to see and appreciate. As Shultz rediscovered and wrote about her beloved hometown, she hopes to spark more interest in the landmarks and history of Denver to ensure the city’s future is strong and vital.

Shultz’s book, Essential Denver: Discovery and Exploration Guide, highlights the fabulous things the city offers. With a light touch of history, she hopes Denverites will take good care of the city for years to come. The book is filled with fun facts and great lists. Readers will learn about: 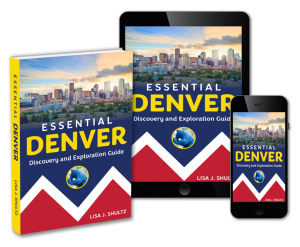 Essential Denver is available in paperback and eBook on Amazon and to support shopping local, it is also available at I Heart Denver Store located in the Pavilions on 16th Street Mall. Find about more about the author on her website, LisaJShultz.com.