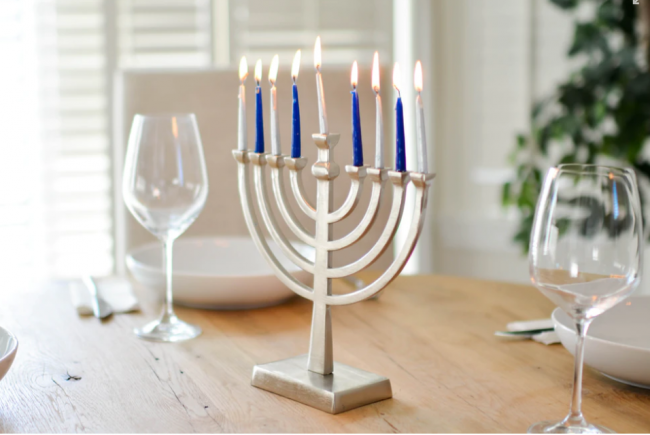 Hanukkah 2020: Celebrate with these Denver events, traditions and recipes

Hanukkah is an eight-day Jewish holiday that celebrates religious freedom. This year Hanukah begins on the evening of Thursday, December 10- Friday, December 18. Hanukkah is celebrated in the wintertime, near or around Christmas. Though the proximate occurrence of the two holidays is coincidental, it is interesting in that the story of Hanukkah raises questions about how a religious or ethnic community maintains its identity in relation to a broader culture.

In 168 B.C.E., the Jewish holy temple in Jerusalem was seized by Syrian-Greek soldiers and dedicated to the worship of Zeus. Then, the Syrian-Greek emperor Antiochus made the observance of Judaism an offense that was punishable by death. He banned circumcision and Sabbath observance and he also ordered all the Jews to worship Greek gods. A group of Jewish rebels called the Maccabees revolted against Antiochus and regained control of the Temple. In order to rededicate it to the singular God of Judaism, they had to light the temple’s Menorah or seven-branched sacred candelabra. To their dismay, the Maccabee soldiers only found one day’s worth of oil remaining in the Temple. Nonetheless, they lit the menorah, and a miracle happened. The small portion of oil burned for the full eight days. Hanukkah celebrates this miracle and is thus also called The Festival of Lights. 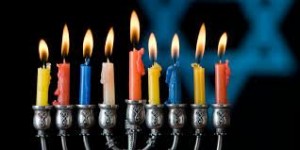 A menorah has nine candleholders, eight for the eight nights of Hanukkah plus one for the shamash or helper candle. On the first night of Chanukah, use the shamash to light one candle. One the second night, light two candles, and continue for eight nights, adding another candle each night.

After lighting the candles say the following blessings: 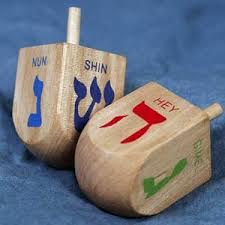 A dreidel is a four-sided spinning top. Each side of the dreidel bears a letter of the Hebrew alphabet: Nun, Gimel, Heh and Shin. Together, these letters form the acronym for Nes Gadol Hayah Sham, “a great miracle happened there.”

Rules of the game: Each player begins with an equal number of game pieces (usually 10–15). The game pieces can be any small object, such as chocolate kisses or pennies. Each player spins the dreidel once during his/her turn. Depending on which side is facing up when the dreidel stops spinning, the player gives or takes game pieces from the pot:

WHEN: Dec. 13, 2020
WHERE: Cherry Creek North
Chabad of Cherry Creek will host a community Menorah Lighting celebration on the Sunday of Chanukah with hot latkes, sing-a-longs, donuts, dreidels and more.

WHEN: Dec. 13, 2020
WHERE: Meet at City Hall Westminster 4800 W 92nd Ave
Enjoy a super fun Chanukah holiday event. Each car will have a menorah affixed to the top of the car. Menorah lighting following the parade is optional and will include entertainment and light refreshments

WHEN: Dec. 13, 2020
WHERE: Online
Join the JCC Mizel Arts and Culture Center to light and bless Hanukkah Menorahs together as a community. Sing and dance, do Hanukkah-themed activities, and talk about the importance of tzedakah. Featuring educators from Jewish Explorers, Judaism Your Way, Staenberg-Loup Jewish Community Center and PJ Library.

It is customary to eat foods that are fried in oil on Chanukah to recall the miracle of the Temple oil that lasted for eight days. Donuts are a popular Hanukkah treat, as is the commonly known and loved potato latke.

Peel and grate the potatoes. Put them straight into cold water, then drain and squeeze them as dry as you can by pressing them with your hands in a colander. This is to remove the starchy liquid, which could make the latkes soggy.
Beat the eggs lightly with salt, add to the potatoes, and stir well. Fill the bottom of a frying pan with oil and heat. Take a large spoonful of the mixture and drop into the hot oil. Flatten a little, and lower the heat so that the latkes cook through evenly. When one side is brown, turn over and brown the other.

Lift out and serve very hot, with applesauce or sugar.

Evelyn Becker is a writer, activist and mother who wrote the book, “Three Sabbaths: a memoir of rebellion, repair & love.” Evelyn lives with her husband and two young children in Denver, Colorado.