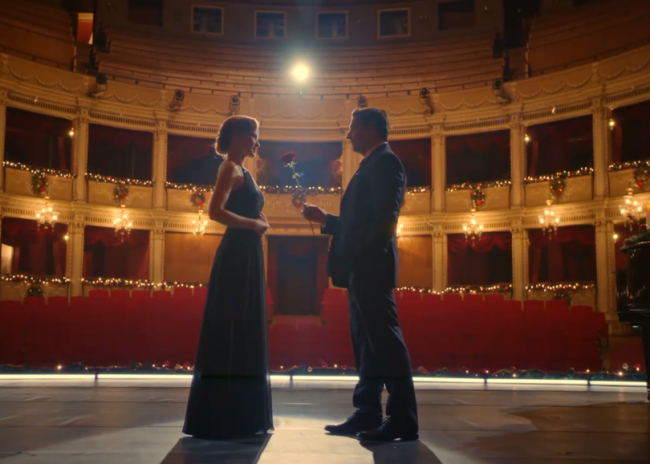 Every Hallmark Christmas Movie Ever (Plus Hallmark’s Christmas Line-up)

It always starts in a cozy New England Town.

But really, aren’t we all suckers for Hallmark’s Christmas movie lineup?

While in Vienna for a violin concert, Jess (Drew) rediscovers what made her fall in love with music in the first place, all thanks to a new flame (Elliott).

Charles (Paevey) travels from 1903 to 2020 to experience a futuristic Christmas, with the help of his charming tour guide (Cahill).

Phylis (Lawrence) and Bill (Williams) hope that having their two sons at home over the holidays will help them find a way to grow stronger as a family. While there, both sons reveal that they are also struggling with problems of their own.

Heart of the Holidays, starring Vanessa Lengies and Corey Sevier

When Sam (Lengies) returns home, she’s confronted with her past — her high school boyfriend, Noah (Sevier). As they take a walk down memory lane, they remember what’s really important in life.

Firefighter Kevin (Taylor) is the only thing standing in Erin’s way of planning the best Christmas celebration ever. That means, it’s up to her to win him over to get a celebration-worthy spruce tree from his property.

When two TV hosts are forced to cozy up to the competition over the holidays, they learn that they have more in common than they thought.

The days for The Starlight Café are numbered. That is, until Annie (Sustad) meets Williams (Campbell), who works for the development firm looking to demolish the restaurant. He proposes an out-of-the-box idea that forces Annie to consider how low she’s willing to go to save her family’s business.

Lisa (Lenz) is determined to secure a five-star rating for her dad’s bed & breakfast. But when she meets (and falls in love with) a mysterious B&B guest, she’s shocked to learn he’s the travel critic behind the review.

Avery (Chabert) turns to her dance instructor (Kemp) for guidance after the wedding of her dreams is unexpected canceled.

If I Only Had Christmas, starring Candace Cameron Bure and Warren Christie

A bright and cheery publicist (Bure) works with a scrooge-like business owner (Christie) and his team of The Wizards of Oz-inspired characters to help a good cause.

Since Michelle (Peete) has plenty of wedding planning her plate, she leans on Hannah (Bernard) to wrap up the launch of the new Evergreen museum. All the while, she begins to question her own future — and if Elliot is really Mr.Right (Cayonne)

Kayleigh (McKellar) is heartbroken to learn that her romance column is canceled right before the holidays. While home with her family, the person who canceled her column (Neal) shows up at her door to tie up loose ends.

Lina (Cook) and Max (Holt) face the unexpected when a storm hits, potentially ruining their holiday plans. The two of them are forced to work together to figure out a way home — without taking it out on each other.

By the looks of it, Emily (Mowry-Housley) has it all: She’s a well-respected newscaster, and loved by many. But in her eyes, she lost the thing that matters most — her first true love (Xavier). A ride on the carousel at the town’s Christmas carnival brings her back in time, giving her a second chance at the love and life she deserves.

Lila (Boston) partners up with the Prince of Marcadia (Bledsoe) to repair the Royal Family’s carousel by Christmas.

In the height of the holiday craziness, Christina gets back a DNA test and learns that she’s actually Jewish. This leads her down a path of self-discovery, even finding romance along the way.

Meet Me at Christmas, starring Catherine Bell and Mark Deklin

Joan takes over the wedding planning duties for her son after his wedding planner quits. Then the bride’s uncle offers to pitch in, which causes the two to grow close.

Just a week before Christmas, Dr. Alicia Wright (Peete) heads to an assignment far from home. There, she meets someone from her past who reveals some life-changing news.

A writer (Wagner) is determined to solve the town’s biggest holiday mystery: Who is the person granting all of the wishes on the angel tree? In the process, she reconnects with someone from her childhood (Bryant) who helps her find the answer.

After returning home, Sam (Page) catches himself stuck in traffic next to his high school sweetheart, Margie (D’Orsay).

A local reporter (Lilley) sets sail on a Tiger Cruise over the holidays, where she befriends the naval officer (Donovan) and digs deep into a the ship’s past.

Holly (Greene) asks an investigative reporter (Penny) to help her track down the owner of a lost charm bracelet before Christmas Eve.

Time for Us to Come Home for Christmas, starring Lacey Chabert and Stephen Huszar

Five people are randomly (or possibly, not so randomly) invited to celebrate Christmas at the local inn. Shortly after her arrival, Sarah (Chabert) learns that the guest list may help her — and everyone else, for that matter — learn more about their past.

Jessica (Reeser) knows this may be her last normal Christmas, so she escapes to a small town for peace and quiet. Things heat up as soon as she meets the town’s fireman (Cupo).

Kate (Cole) and Kevin (Lund) go on a wild goose chase to figure out who left the mysterious key and holiday riddle on their doorstep — and what it really means.

Swept Up by Christmas, starring Lindy Booth and Justin Bruening

An antique seller and cleaner can’t agree on how prepare an over-the-top estate for the holiday season. They start at square one, uncovering the home’s hidden treasures … and secrets.

Lucy plays Santa all season long, granting wishes and helping families prepare for the holiday. But one little girl’s wish leads her to discover a dream of her own.