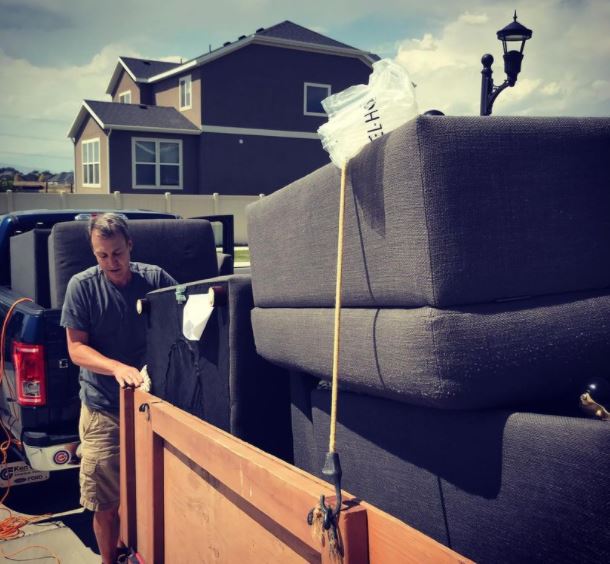 Moral of the story: Mom always finds out

I was going to rave about this guy’s mad Tetris skillz fitting our huge new (to us)sectional into a tiny trailer last week.
But no, this post is how, when we were later passed out on Said Couch in our uncarpeted basement that my daughter my husband Jamie if “Mom knows?”
IF MOM KNOWS WHAT!!?? And then the truth was (reluctantly) revealed.
For the past six months, we’ve been living with everything from our basement crammed into the garage and every nook and cranny in the house as we finish our basement. Jamie put our TV in a precarious place in his office and I told him I didn’t think it was a good idea but of course, no one listens to Mom and he ignored my recommendation.
Not even 5 MINUTES later, the TV tipped and cracked.
He and The Children have been holding onto this secret for months (and the fact that he covertly bought another TV in its place).
It’s kind of like when I went on my mission to Switzerland and I left my family explicit instructions to not ride my new road bike…and my brother
Jade rode it to the store and it got stolen within A WEEK OF MY DEPARTURE. But of course, no one told me.
As we were sitting at my homecoming dinner 18 months later, my brother Pat asked me if I had ridden my bike yet. I thought it was suspicious because it was December in Canada and of course I hadn’t ridden my bike. Jade kicked Pat under the table as Pat kept chattering away, “It’s kind of like when you’re pet sitting someone’s goldfish and it dies so you buy a replacement fish without telling them.” And then The Truth came out as it always does.
Side note: They bought me the same bike hoping I wouldn’t notice…except that it was a different color so it was kinda hard not to notice. And then they got mad at me for spending so much money on a bike.
The moral of this (unintentionally long) story: I WILL ALWAYS FIND OUT.
The End.