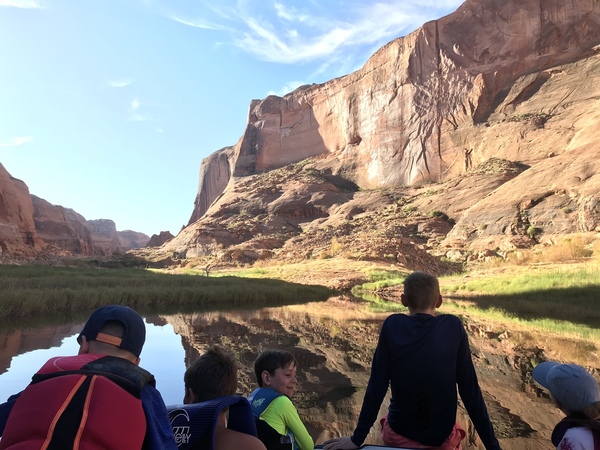 The best of Lake Powell: A houseboat vacation to remember

The kids sat transfixed on the bow of the boat as we slowly snaked through a maze of skinny, stripped trees, being careful to dodge the necklace of tall green grass that lined our route. We were in Forgotten Canyon, known for its Anasazi ruins that are only accessible by boat. 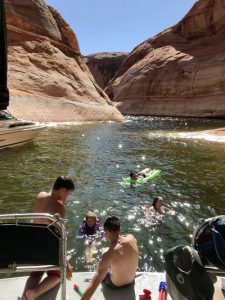 After months of isolation at home, I thought I knew solitude until we spent a week quarantined on a houseboat with friends. From Glen Canyon Dam, Powell’s water backs up for about 186 miles, inundating some 96 named canyons.  Lake Powell is practically an Instagram trope now, but in person, those red rock cathedrals and turquoise waters lose little of their power to the hashtags or partying houseboat culture.

In 1869, explorer John Wesley Powell wrote: “We have a curious ensemble of wonderful features – carved walls, royal arches, glens, alcove gulches, mounds and monuments.” How the second-largest man-made reservoir in the nation can swallow up the crowds to give you your own private paradise is a marvel.

We launched from Bullfrog Marina, destination: Moqui Canyon. Camping is first-come, first-served at Lake Powell. If you can anchor or stake your houseboat to shore, it’s yours. The forecast ranged from 101-110 degrees Fahrenheit, differentiated only by the forecaster’s descriptors of “sizzling hot,” “stifling hot” and “death-to-this-Canadian hot.” 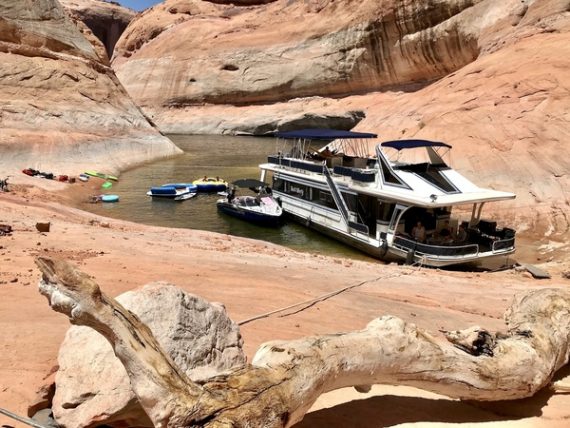 What Should I Do At Lake Powell? Surf, Swim, Rest, Repeat

Each morning, we awoke to the sun, a crow-squawk, or “Hooked on a Feeling” (a nod to Guardians of the Galaxy) blasting to our tired teens. We grabbed breakfast, hopped on the boat for surf sessions or tube wars, and returned to our private cove to jump off our 25-foot cliff or paddle-board to neighboring canyons. 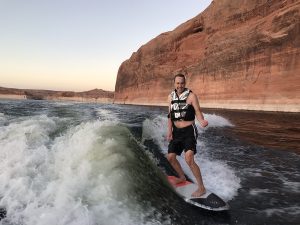 The afternoons burned July-hot with an occasional blast of fire-breathing wind. Everyone moved slowly, the swamp cooler working overtime to combat the temps. We jumped in the lake to cool down, passed out on hammocks or hunkered down to watch movies in the cabin.

We came to life again at dusk as we enjoyed the deep shade of the high vertical walls. We mastered our diving technique, careened down the houseboat’s slide and eavesdropped as our teens conjured up a maniacal slip ‘n slide that catapulted off a steep cliff into the lake. It thankfully never came to fruition and I got called a ‘Karen’ for my objections. I regret nothing.

The nights burned, the stifling temps only alleviated by jumping in the lake before bedtime and a magical white pill called Ambien. We slept on the deck, the desert sky a sea of light. The full moon was anchored overhead like a flashlight stubbornly shining in our faces, causing my friend Kristine to repeatedly yell, “Someone needs to turn off the light” in a sleep-aid-induced stupor. 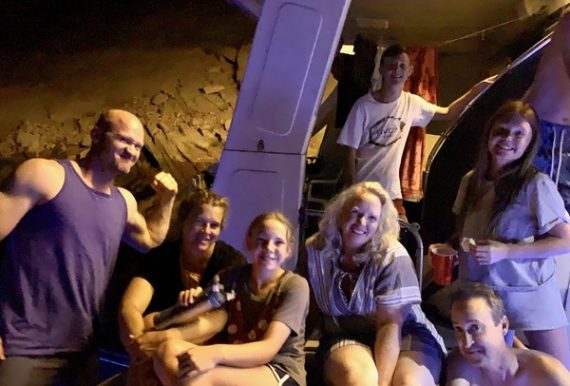 To Infinity and Beyond Exploring Lake Powell’s Hidden Canyons

Lake Powell’s main channels and marinas can get overcrowded with loud music and an invasion of jet skis but the real secrets are in the side canyons. Last summer, we hiked to Rainbow Bridge National Monument, the sixth-longest natural bridge in the world that vaults 290 feet over the dry bed of Bridge Creek. 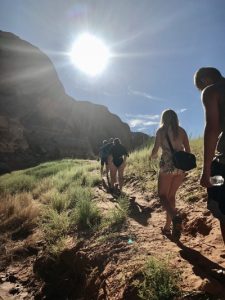 Another day, we journeyed to the center of the earth, Cathedral in the Desert. This 60-foot waterfall was literally buried when Glen Canyon was flooded but as the water levels fluctuate, the upper chamber of this giant natural amphitheater reemerges like the utopian city of Atlantis. During our visit, the waterfall was a small version of its former grandeur, allowing a few brave souls to climb a derelict rope up the waterfall while the rest of us scrambled up the steep chamber, the stained red, orange and gold walls telling us the story of the fluctuating water levels. We were greeted by willows, cottonwoods and the dulcet sounds of dripping water…and another waterfall cascading into a pool most of us could not climb.

For our 2020 explorations, we journeyed back in time to approximately A.D. 1250 to 1285 and visited Defiance House, named after the warrior pictographs of three warriors brandishing clubs and shields that are tucked under an overhang on the cliff above the ruin. Occupied by the Anasazi (Ancestral Puebloans), the small adobe structures were occupied by one or two extended families of 15 to 20 people. It is one of the best-preserved Ancestral Puebloan dwellings in Glen Canyon National Recreation Area, only accessible by boat and a short hike via Forgotten Canyon. 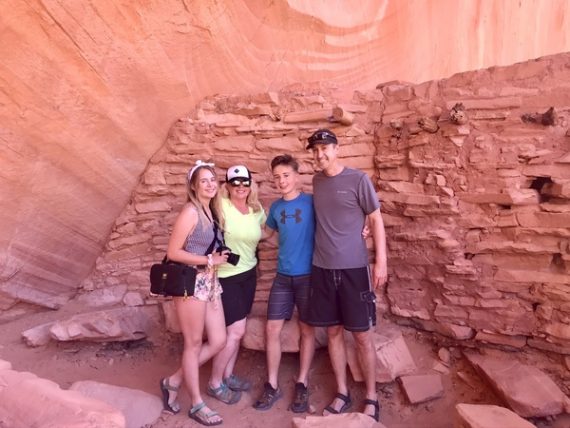 On another day, we climbed “The Crack” at approximately Mile Marker 107 in the channel (don’t try to Google it; this slot canyon is best found by word-of-mouth). The Crack is literally a journey through the sliver of a precipitous cliff and, without a place to beach the boat, my friend Dawnelle stayed behind while the rest of us swam to the rocks. We climbed up, up, up, over boulders, aided by a rope and strong, encouraging dads. We were greeted with the deep shade of a high vertical slot canyon that swallowed us up as shafts of light illuminated the red and orange sandstone walls. 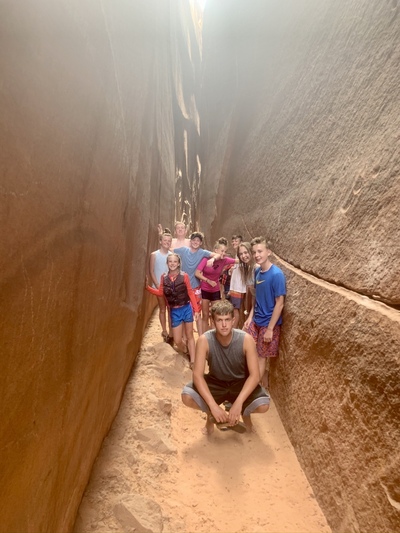 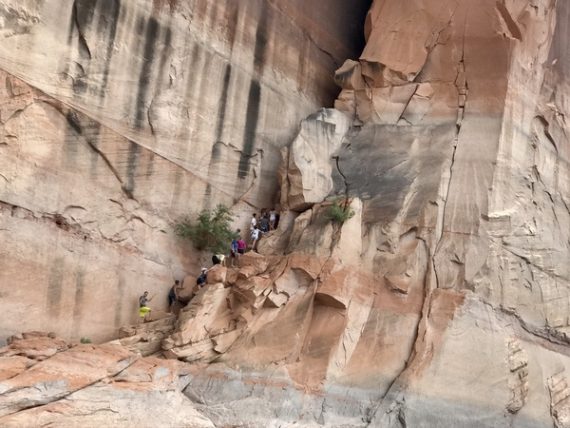 The descent was a lesson in trust as we shimmied through tapered sections. A rope had been secured for a short rappel down a steep rock face where Cody’s sturdy shoulders then lowered us to the ground. I did a lot of canyoneering in my former life so I was able to quickly navigate this section, causing the shocked teens below to exclaim, “Did you play hockey in Canada?” (the two sports are apparently connected). We all miraculously survived unscathed. However, one of the teens in our group, terrified of heights, later attested it was the hardest thing she’d ever done but the reward at the end was a jubilant cliff jump into Lake Powell’s cool waters. 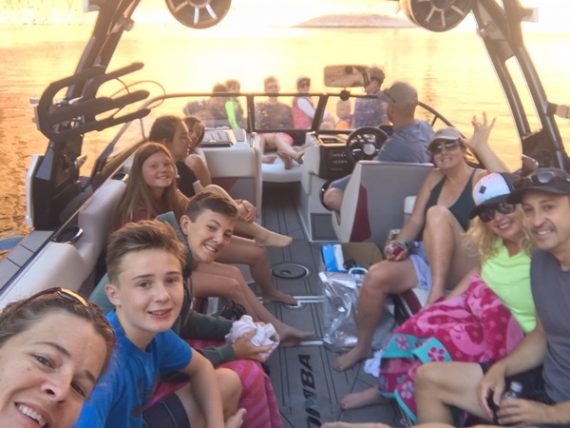 A Vacation of Highlights 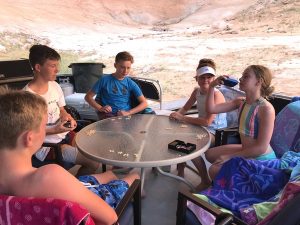 (The queen fanning herself)

Of course, any vacation is full of quotable moments. A few of my favorites included:

“Bryson, go teach your sister how to gamble with the boys.” (Sidenote: Maddy won).

“We just took a bath in shampoo and pee.” (According to Aubrey, it’s tough to feel squeaky clean after bathing in the lake).

“Maybe that’s why it’s called ‘Defiance House.’ (Jamie’s response to whining teens who objected to waking up early to hike to the ruins).

A few other high and lowlights: 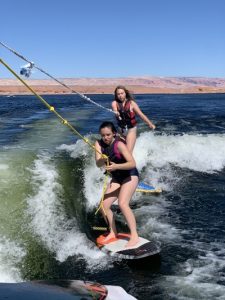 Lowlights: Monty Python’s ‘Blessed are the Cheesemakers,’ doing doughnuts trying to pull the houseboat out of the marina, my daughter getting stuck on a precarious cliff (an annual occurrence), my son scraping his face and chest on a rock during a dive-off, Jamie and Syd getting left behind at the slip two years in a row, and that stifling heat (have I mentioned it already?)

Highlights: Diamond-lit skies, pushing boundaries, marathon Scum tournaments, healing from hurts, an adults-only surf night, jumping into the rooster tail (the wake of the boat), delicious food, patient boat drivers, epic wipeouts, double surfing, being generous with time, slowing down, and connecting with dear friends in a world that, seemingly stripped of life, forces you to dig a little deeper.

As a non-boat owner, a trip like this feels like a privilege and I expressed my gratitude for being included to Cody. “Well, it all worked out because you brought the fun.” 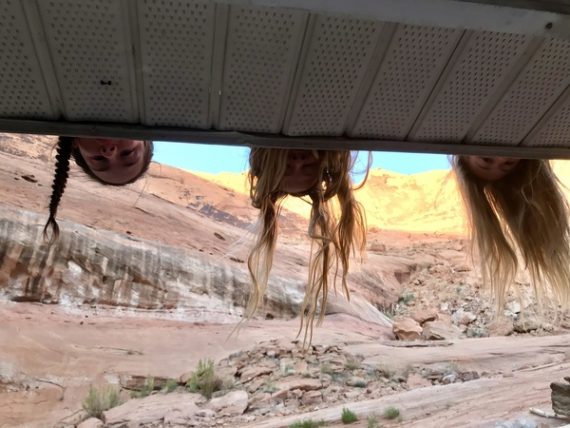 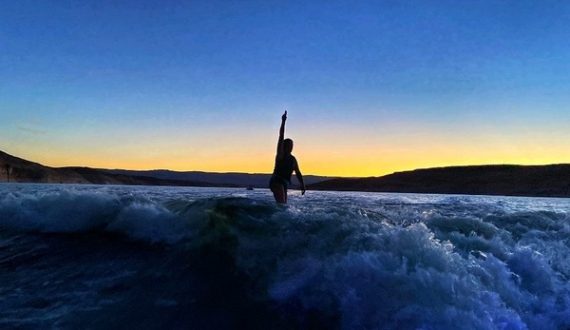 In Case You Missed Amber’s Other Adventures:

A Wildfire, evacuation and a Grand Canyon adventure up in flames