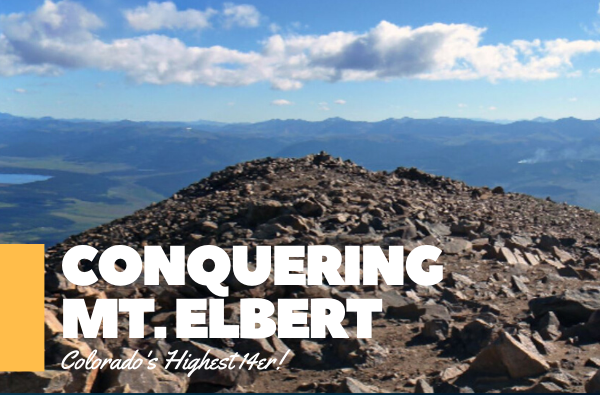 I am proud to say we bagged Mt. Elbert–Colorado’s highest peak and the second highest in the lower 48. I enjoy saying that because it sounds impressive. Not so impressive is my next confessional: I have hiked much steeper and more difficult mountains than Elbert.
Don’t get me wrong: scaling 4,700 vertical feet was no stroll in the park but I was pleasantly surprised this mountain did not send me to my grave. Well, at least not completely (though admittedly one foot did make its entrance).
Prior to setting out on our trek, we realized Jamie had misplaced two key items: the map and an altimeter. We managed to fudge our way without the former but were hatin’ it without the latter. You see, ascertaining your elevation with an altimeter helps you avoid something agonizing called false summits: thinking you reached the top, only to find the real summit taunting you in the distance.

For further clarification: Baby keeps you up for first six months of her life. Finally sleeps through the night. Parent thinks HOLY CRAP, BABY SLEPT THROUGH THE NIGHT. I HAVE ARRIVED! Next night: Baby wakes up every hour. False summit.Feel my pain?

When climbing 14,000-foot peaks (14ers) it is critical to be off the summit by noon due to dangerous weather patterns that blow through the Rocky Mountains. We stayed at a nearby B&B and were on the trail at the crack of dawn. It did not take long for the pitch to become fevered. Jamie and I have very different hiking styles. He is more of a sprint-and-stop kind of guy while I am slow and steady.

Despite the commanding views at the top, I am not partial to 14ers for their beauty. Part of the reason is you are doing the brunt of the climb above treeline. And call me crazy but there is little innate beauty about rocks, particularly when that is all you see for hours on end.But this hike was different. We ascended through whispering aspen groves, boreal forests, glacier-scoured valleys nestled between craggy peaks and through profusions of wildflowers in full bloom. In the distance, the silence was punctured by the howl of coyotes and the call of an elk. Oh, and the cussing of a Canuck. Did I mention just how steep it was?

We kept pace with one another until about 1/2-mile from the top when Jamie got summit fever and picked up his pace from a slow crawl to only a semi-slow one.

And then I gave him that look. You know, that one that says you had better slow down right now if you want to create our final child and also spend the rest of our lives practicing. That look.He stopped in his tracks.

I am proud to be a role model for supporting a husband’s aspirations and dreams.

Reaching the summit is like an elite club of folks whose altitude sickness has made them forget the misery of the climb. And that is what keeps them coming back again and again. The group is always eclectic, always friendly, and always has a story. Like this young buck who set the goal to juggle atop all of Colorado’s 14ers.

I felt strong the first few miles of the descent but the intensity of the hike kicked in the last 1.5 miles and our knees screamed out in protest.
Jamie’s knee was still bothering him when we arrived home so I graciously unloaded his luggage. And you’ll never guess what I discovered.