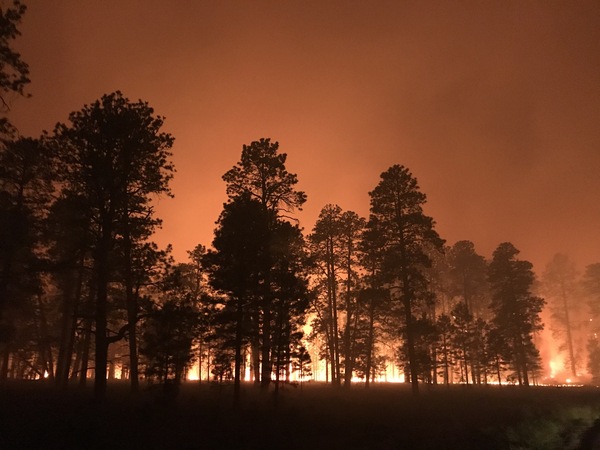 A wildfire, an evacuation and a Grand Canyon adventure up in flames

COVID-19 has not been fun for anyone.

A few of our highlights: I commemorated the one-year passing of my mother’s death, my dad was diagnosed with lung cancer (and I’m unable to cross the Canadian border to aid in his recovery from surgery), our beloved pet of over a decade passed away, economic stress, homeschool nightmares, ongoing health challenges, an earthquake, the stress of finishing our basement and now we’re adding our only vacation that (literally) went up in flames.

Does anyone else feel as though you have lived a lifetime in just a few months?

Overall, we’ve been blessed. We have a roof over our heads. Food on the table. Enough money to pay the bills. And, most importantly, each other.

The Grandest of Canyons

What we haven’t had the last several months is travel so when some friends invited us to camp on the North Rim of the Grand Canyon, we were all in. My husband and kids had never been to the Grand Canyon and a socially-distanced, relaxing getaway was desperately needed. 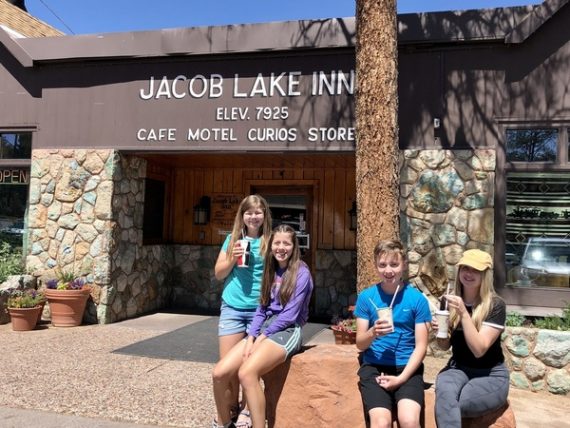 Our excitement grew as we ventured along Highway 89A, a 5,000-foot climb over 40 miles to the Kaibab National Forest. We stopped at the Jacob Lake Inn, a charming outpost curiously devoid of a lake, but renowned as the “The Gateway to the North Rim.” The inn offers cabins and motel rooms, a restaurant, gas station, small grocery store, gift shop and they are most famous for their palate-pleasing milkshakes, pies and assortment of cookies (lemon zucchini and Cookie in a Cloud are among the favorites).

Little did we know that just 10 hours later, our memories of Jacob Lake would be much less sweet. 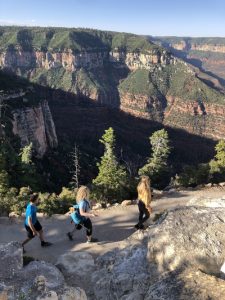 We drove south along Highway 67 past verdant meadows, quaking aspen and ponderosa pine toward the Grand Canyon North Rim. We made an hour-long detour on a backcountry road and set-up camp a few miles from the Rainbow Rim Trail where we planned to mountain bike the next day. The next few hours were spent setting up camp, hammocking and exploring our remote little plot before driving into Grand Canyon National Park.

The North Rim’s seasonal opening had been delayed due to the COVID-related shut-downs. During the time of our visit, the Grand Canyon Lodge North Rim, Visitor Center, Dining Room and campground were still closed. For a world-famous national park that gets four million annual visitors, it was surreal to have the North Rim mostly to ourselves. “How can we be so lucky?” we marveled as we cooked dinner in the deserted campground, freely explored the gift shop and took heaps of photos along the North Rim. The mile-high crimson walls revealed a cross-section of the Earth’s crust dating back to nearly two billion years and in awed silence, we felt like we were discovering this red rock nation for the first time.

Between a [Red] Rock and a Hard Place

At dusk, we melted into the Adirondack chairs on the deck of the lodge, our only cares in the world were if that evening’s sunset would match the bold reds, oranges and pinks of the canyon’s promontories. We were just starting an animated game of Head’s Up when our evening was interrupted by a park ranger. His nose and mouth were masked but there was urgency in his eyes. “You need to evacuate the Grand Canyon. NOW.” 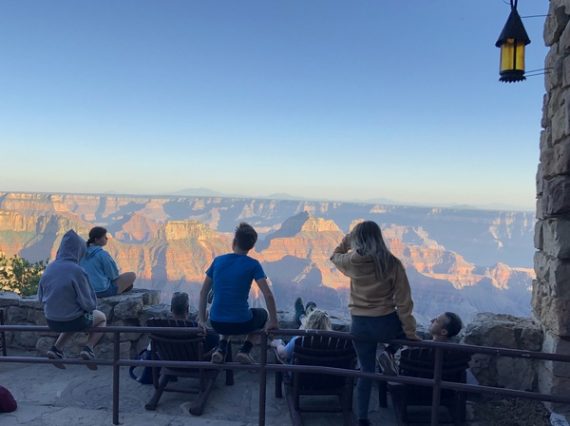 Dumbfounded, we listened as he told us they were closing down the North Rim due to the escalating Mangum Fire which was burning near the park.  We scrambled to locate my daughter who had wandered off taking photographs, jumped in our vehicles and made the hour-long slog back to break camp in the dark as our friends blasted the best of the 80s from their truck (sidenote: Flashdance‘s “What a Feeling” was the No. 1 song in America which was a befitting soundtrack).

We navigated that lengthy backcountry road for the fourth time that day, straining for visibility through the dust and darkness. When we finally reached Highway 89A, a police car was navigating traffic. Yes, the highway is still open for now and yes, we should hurry.

I honestly wasn’t too worried at that point because there were several factors working in our favor. The park had just barely closed and we were incredibly lucky to have been among the few people in the park at the time of the notification; who knows when we would have received word of the closure if we had stayed at our secluded campsite that evening.

We curiously watched as the black plumes of smoke rose into large pyrocumulus clouds in the distance. We were the caboose of our caravan and about 30 minutes into our drive, we encountered a truck heading south in the opposite direction. They were urgently trying to get our attention so we eased to a stop. “Turn around now,” they shouted at us.  “The fire has jumped on both sides of the highway. We just drove through it and didn’t know if we would make it out because the smoke made it impossible to see the road.”

I frenziedly called our friends but when I couldn’t reach them, we reluctantly kept driving toward Jacob Lake. As we rounded a bend, we were very alarmingly in the middle of a ring of fire. Our friends’ vehicle was pulled over and they had jumped out of the car to marvel at this scene straight from Armageddon.  Bone-dry air and combustible vegetation were the perfect formulae for disaster as we had a front-row seat to this smoke show.  The flames leaped from tree-to-tree, moving rapidly along the trunk and up to the crown, decimating branches as they spread. Our senses were bombarded with the penetrating colors–brilliant pumpkin orange, eerie green and blood red. Next came the whiffs of burning pine and embers in this high kingdom of cloud and smoke. And finally, the heat. We were close enough to the inferno to feel the hot cinders lapping against our skin.

We were in hell and yet somehow, it was mesmerizingly beautiful, just like those final moments in Raiders of the Lost Ark when the spirits emerge from the ark, eventually revealing themselves to be angels of death before vaporizing the remains of the doomed assembly in a whirlwind of fire. 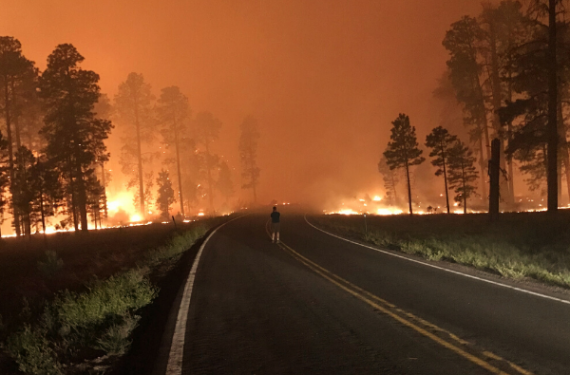 I snapped out of my reverie to a sense of urgency. “GET BACK IN THE CAR!!!” I shouted at my husband. He spent a few more minutes photographing the wildfire, telling me upon reentering the car that I needed to calm down. Pro-tip for husbands everywhere: Don’t tell your wife to calm down. Ever. The result will be quite the opposite.

We quickly turned around, driving into the blackest of black abyss, frequently startled (and devasted) over the wild eyes of the minefield of terrified deer that lined the road.

We were among the lucky ones. Unlike the thousands of people who have lost their homes and their lives to wildfires over the years, we had an escape route, an alternate way off the mountain that took us several hours south to Page, Arizona where we stumbled into our hotel room’s beds at 2 a.m., exhausted yet grateful.

The whole experience, particularly after months of anxiety and unknowns, continues to be overwhelming.  I almost vowed I wasn’t going anywhere ever again until I remembered that’s what we’ve been doing these past several months so I’m basically between a [Grand Canyon] of rock and a [burning] hard place.