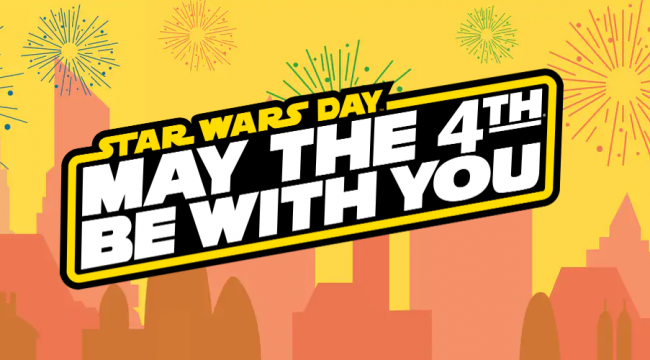 May the 4th Be With You: 5 Ways to Celebrate Stars Wars Day

We need the force to be with us more than ever these days.

May 4 is often known as “Star Wars Day.” It is jokingly said: “May the 4th be with you”, in reference to the popular catchphrase in Star Wars: “May the Force be with you.”

The phrase dates back to at least 1979, on the day Margaret Thatcher was elected Britain’s first woman prime minister. Her party took out a newspaper ad in the London Evening News that said “May the Fourth be with you, Maggie. Congratulations.”

1. Watch Star Wars movies and series both classic and new on Disney+.

Love The Mandalorian (and the Child, of course) like we do? May the 4, 2020, marks the premiere of Disney Gallery: The Mandalorian, an eight-episode behind-the-scenes docuseries. What better way to kick off Star Wars Day? You don’t want to miss it — but that’s not all the May the 4th goodness coming to Disney+.

The groundbreaking animated series Star Wars: The Clone Wars ends on May the 4th as “The Siege of Mandalore” story arc concludes. Find out what the Force has in store for the next part of Ahsoka Tano’s journey or watch the final arc all over again as a complete cinematic experience.

This year’s Star Wars Day also brings Star Wars: The Rise of Skywalker to Disney+ two months early, along with behind-the-scenes featurettes that are worth getting exciting about on their own, as well as a special concept-art takeover.

Your movie night doesn’t have to send there! You can also find all sorts of Star Wars features you haven’t seen before on Disney+. More making-Star Wars documentaries, episodes of an animated series you haven’t watched yet, and deleted scenes from your favorite film are all waiting to be discovered on Disney+. We recommend taking a look at the deleted scenes of Star Wars: The Empire Strikes Back in honor of the movie’s 40th anniversary for even more wampa action! (For more guidance, check out our guide to 10 Star Wars gems on Disney+.)

2. Compete in a closet costume challenge.

Grab the family and get ready to raid the closets! Issue a challenge to the others in your home to dress as your favorite Star Wars characters using just what you already have around the house. We’re talking bathrobes for Jedi robes, headphones for Princess Leia hair buns, or your fanciest dress for Padmé Amidala.

Then it’s time for a Star Wars fashion show unlike any other. Can they guess who you are? (And if you have official Rubie’s costumes or roleplay toys like Hasbro’s Scream Saber, now’s the time to break them out!)

All of the stirring music from the Star Wars films is officially on Spotify and Apple Music, and you can test your knowledge of the saga’s tunes with the incredible collection! Get your friends on a video conference or the phone and get ready to play.

Simply choose your favorites from the over 10 hours of beloved John Williams music from Episodes I-IX, play a snippet of a track, and see if they can remember which film the selection is from. Whoever names the episode first wins a point. Play until someone earns five points to determine the ultimate Star Wars music connoisseur!

For even more of a challenge, have them name the specific scene of the film. You can also use the “Best of Star Wars” playlist on Spotify and Apple Music, which includes selections from non-saga films, Star Wars: The Clone Wars, and even Oga’s Cantina at Star Wars: Galaxy’s Edge.

There’s no shortage of ideas for things to make and do on StarsWars.com. Family-friendly crafts, recipes for bakers and chefs both expert and novice, and more are all waiting to be discovered. Have a fun-filled Star Wars afternoon packed with a Chewie and the Porgs craft and activity, work on your Bad Batch cosplay, make a Ewok rice bowl for lunch, and much, much more.

Parents, you’ll also find exclusive crafts and activities to do with the kids on the Star Wars Kids YouTube channel! Get ready to paint, draw, and be creative together with Let’s Draw Star Wars and Let’s Make Star Wars.

5. Listen to Star Wars stories read by some of your favorite actors.

Joonas Suotamo (Chewbacca), Anthony Daniels (C-3PO), Ashley Eckstein (Ahsoka Tano), and Daisy Ridley (Rey Skywalker) are here to tell you a Star Wars tale! These famous faces of Star Wars all have a picture book to read to you and your family this Star Wars Day.

Daisy narrates Star Wars: BB-8 On The Run by Drew Daywalt and Matt Myers in this special storytime.

Hearing Daisy once again say “BB-8” and Anthony Daniels read “R2-D2” in their familiar voices as they relay these stirring stories will absolutely make your heart melt. Your kids’ imaginations will soar when they listen to these read-alouds on Star Wars Day, or any day.

All the best this May the 4th, and may the Force be with you!