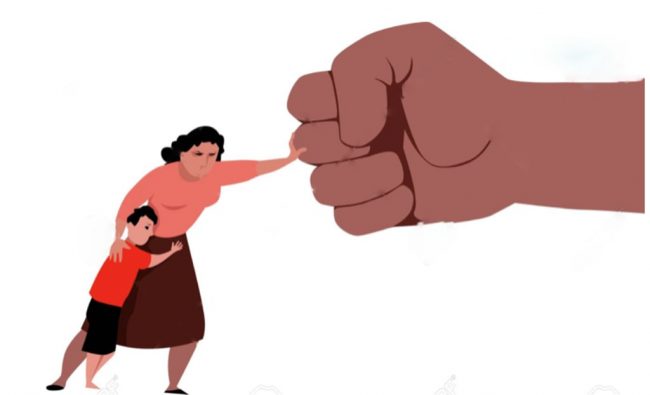 Moms Fight Back: Rising From the Shadow of Abuse

“You’re a greedy b—.” The low and intense tenor of my ex-boyfriend’s voice conveyed a deep contempt for me. I was in my car waiting for my daughter to come out of his house so I could take her home. But he wasn’t letting her out. He was crouched down at the driver’s side window with his face disturbingly close to mine, berating me for my “bad behavior” as if I were a child.

The father of my child has never physically harmed me or my daughter. His onslaught takes the form of control, manipulation, intimidation and verbal and emotional abuse. Over the years, he has used threats of lowering her child support or obstructing her medical care when he doesn’t get his way. In order to mitigate conflict, I’ve had to pick my battles.

Several years ago I told our court evaluator my ex had anger issues and was controlling but he did not believe me. I thought if I told the truth I’d be believed. I put my faith in the system. I was naive. It was gut-wrenching to see the judge’s order in which he believed the court evaluator.

His most recent attacks are through the court system – using litigation to harass me and financially drain me. For almost two years he has been filing motion after motion to which I must respond or face losing time with my daughter. While my financial resources are finite, his are unlimited and my legal fees are spiraling out of control. Anxiety spreads like vines creeping through my daily thoughts, affecting even my physical health. After many months of litigation abuse, I have suffered with stress-induced flare-ups of reflux and shingles.

Recently, I learned that coercive control is part of the domestic violence spectrum. I also joined online support groups and have found other women subjected to this type of mental torture. It was through a Facebook group that I found an inspiration to all protective mothers being dragged through the broken family court system. Her name is Maralee McLean.

A post about a rally in the United Kingdom called “The Court Said” featured Maralee’s speech advocating for domestic violence victims internationally. I connected with her and I was thrilled to learn she lives close to me in Colorado. She spearheads Mom’s Fight Back, a group of dedicated mothers fighting to keep their children safe from abusive fathers.

Maralee McLean is a warrior – not because she wants to be, but because she must be. After losing custody of her daughter to her ex-husband despite mountains of evidence he was sexually abusing their child, she never gave up the fight. Protective mothers can lose custody of children when fathers claim parental alienation syndrome (PAS), a debunked theory that labels the mother as dangerous and trying to alienate the father from the child. Psychiatrist Richard Gardener coined the concept PAS, which blames mothers for interfering with their children’s attachment to their fathers. He believed reports made by mothers of violence against children by fathers were mostly false. Although organizations such as The American Psychological Association and The National Council of Juvenile and Family Court Judges have discredited the theory, judges still cling to this dangerous assumption.

She was given one hour supervised visits in a small room for eight years while the father had full custody – and license to continue sexually abusing her daughter. After she went public with her story, she helped organize a rally at the Denver State Capitol for protective mothers and spoke on CNN about her ordeal. Eventually, at age 12, her daughter was able to speak to the judge about the abuse and Maralee was legally reunited with her daughter.

I first spoke to Maralee on the phone about creating a fund to help women pay their legal fees when the abuser persists in litigation harassment. We soon realized there were too many issues to discuss over the phone so we set up a meeting at a restaurant. I arrived first which gave me time to organize my thoughts. A tall raven-haired woman dressed in a conservative pantsuit walked through the door. She walked over to my table, and although we’d never met in person before, we hugged.

I was in awe knowing that across from me was a woman who, despite gag orders and threats of jail time, told her story on major media outlets such as CNN. She also fields hundreds of calls and emails from other mothers turning to her for help. With everything on her plate, she took the time to meet with me. She praised me for the research I had already done on family court and ideas I proposed for Mom’s Fight Back. She listened and I clearly understood why this woman is so special. The depth of her commitment to helping mothers and children has no limit.

To survive the nightmare of losing your child to an abuser and then empower other women to fight for their children’s lives is a testament to her inner strength. When her daughter was taken from her, she felt she had nothing to lose anymore. She chose to give back to women and children rather than hide in the shadows. She took her private fight to the halls of Congress, the podiums at rallies and stages of conferences around the world on child abuse and judicial accountability.

For decades she has been educating the public on the corruption in our family courts and the destruction caused when court evaluators, child protective services and judges make dangerous decisions. Unfortunately, Maralee’s case is not uncommon. Family courts throughout the country ignore evidence of abuse and sometimes accuse the protective parent of brainwashing the children, as if the abuse was planted in their minds or imagined.

She has also written a book, Prosecuted But Not Silenced that touches the lives of so many women going through this heart-breaking process. The title of her book aptly describes her struggle and reaction to it. She wants to let other women know they are not alone and it is not their fault. The family court system can be unjust.

Her advocacy impacts not only women going through a custody battle with a sexual predator, but any woman facing personal obstacles in which authority or legal figures try to obstruct the greater good. For mothers navigating the legal process, it is vital to have a hero like Maralee McLean.

Because of Maralee, I have a support network and I’m part of a movement for family justice. Our struggles are unique, but we are bonded by the resolve to make our family court system truly committed to the best interest of the child. I’ve joined other Mom’s Fight Back members to meet with state legislators to provide new legislation that makes the child’s safety the first priority and to require family court judges receive training on domestic violence, coercive control, child abuse and child sexual abuse.

Every small action can make a difference. We’ve banned together on a letter-writing campaign to investigate a magistrate that gave custody to father with a history of domestic violence. There is power behind a group of steadfast women.

Maralee’s resilience and fortitude are an inspiration to me. When she was going through her quest to save her daughter, social media didn’t exist. At that time she felt alone and scared, but never gave up on her child. Now with social media, we have the ability to reach out to other members of Mom’s Fight Back for advice, resources or simply to vent.

My court battles are far from over, but embarking on this journey with other mothers is comforting. Because of Maralee, I am not alone.