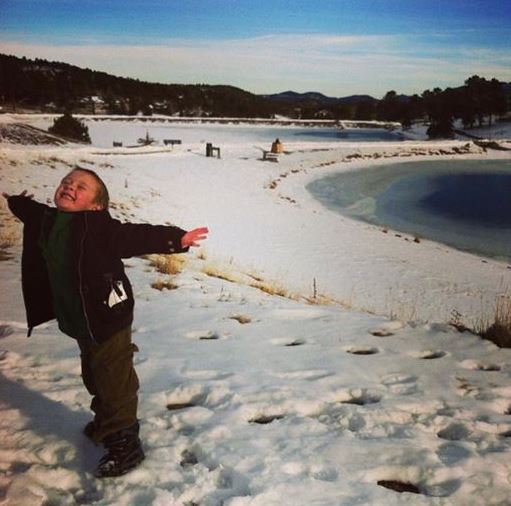 My 13-year-old Bode has always been a deeply intuitive child.  He recently taught us an important lesson on perspective during our little graveside service for our beloved pet.

I was struck. During one of the saddest moments of his young life—when that car felt silent and dark—all he saw was light.

A month ago, I listened to a podcast by Boyd Matheson about perspective and this “New Now” we’re all living. It’s so easy to overreact but we don’t necessarily know if something is good or bad in the beginning. We just know it’s hard, discouraging or frustrating.

Boyd shared the story of an incident in high school that altered his course as a collegiate athlete…and the wise community member who shared the powerful Sufti tale. A certain farmer had a series of potentially devastating events to which his friends empathized about the unfairness of each tragedy but the farmer’s response was always the same, “This isn’t so awful, we just don’t know.” The outcome at the end of a series of unfortunate events was a miraculous, life-saving one. (It’s a short but wonderful lesson and worth a listen: https://omny.fm/shows/inside-sources-with-boyd-matheson/this-is-not-the-new-normal-just-the-new-now?fbclid=IwAR2RLG-nrBec1SE5uoS_vKUlOyE8tciCNFIWFF8xE0HvE7_8oFrR9U5-U-E

The Farmer’s Judgment .. A Sufi tale

Once upon a time there was a farmer who had some land a ways outside the village.
He had a son to help him and one good horse. Indeed, it was a magnificent horse.
So magnificent, that when the King passed through the village, he heard about the
horse and asked to see it.

The King was so impressed that he offered the farmer a considerable amount of
gold for the horse. But the farmer would not part with his horse, and the King went away.

The next day, the horse ran away!

The villagers rushed to the farmer and exclaimed, “Oh, how awful. Your horse
is gone and you don’t have the gold! What a bad thing has happened to you!”

The Farmer replied, “Well, I don’t know that it’s a bad thing, but I do know
my horse is gone and that I don’t have the gold.”

A few days later, the Farmer’s horse returned. And, not only did the horse come back,
he brought six wild and beautiful horses with him. Each would be worth a great
sum once they were broken and trained.

When the villagers heard, they rushed out to see the horses and to say to the
Farmer, “Oh, you were right! It was not a bad thing that your horse ran away.
Now he has returned and brought you six more fine horses. It is a good thing!”

“I don’t know if it’s a good thing or not,” the Farmer said. “I just
know that my horse has come back and brought me six more horses.”

The following day the Farmer’s son was trying to break one of the wild horses and
he fell off and broke both his legs. Again the Villagers visited the Farmer and
they exclaimed, “Oh, you were right! It was a bad thing that your horse came
back with six more horses. Now, your son has broken both legs and cannot help you
with your crops. Surely you will suffer great losses. Oh, what a bad thing!”

And the Farmer said, “Well, I don’t know whether it’s a bad thing or not. I only
know that my son was thrown from a horse and that both his legs are broken.”

The next day the King returned to the village. He was leading his soldiers to the
border where the kingdom was engaged in a terrible battle with a neighboring country
The enemy was fierce and most of the young soldiers were marching to their death.

As the King passed through the village he rounded up all the young men to join in
the fighting. Of course, the Farmer’s son, with his broken legs, did not have to go.

After the King and his men left, the Villagers rushed to the Farmer and exclaimed,
“Oh, you were right! It was a good thing that your son fell off the horse and
broke his legs. Now he will certainly not die in this war as will so many other young men.

The Farmer replied, “Well, I don’t know if it’s a good thing, or not. But I
know that my son did not have to go with the King to fight this battle.

And so the story goes….

All these things that are seemingly crumbling around us? We don’t know if this is so awful. I’m trying really hard to resist the urge to host my own pity party, remember that perspective matters and always look for the Light.

P.S. We’re in this together, Mamas.