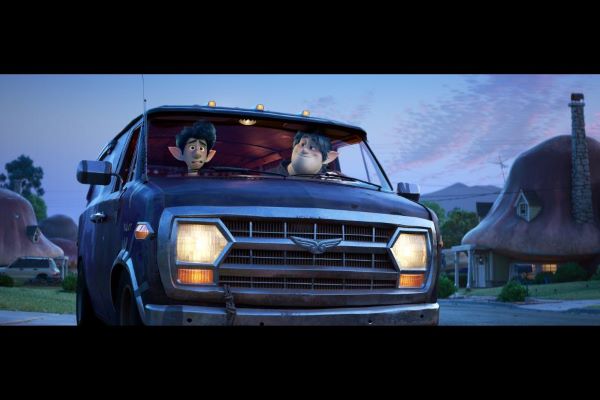 Unicorns are dirty pests that get into trash. Elves live in suburban homes with toasters and TVs. Cops are minotaurs and cyclops. A Manticore runs a family restaurant. Pixies rob convenience stores. Magic? It is nowhere to be found.

Onward opens in a realm that has forgotten its wild and magical roots. Technology, invention, and even pure laziness have replaced the wonder of adventuring through challenges. A few haven’t forgotten the old ways, however. Exuberantly nerdy Barley Lightfoot (Chris Pratt) is using his gap year to careen around in a custom van named Guinevere. He is obsessed with a role-playing game akin to Dungeons and Dragons, convinced it is more than a fun hobby. It is real. When his shy, socially awkward younger brother, Ian (Tom Holland) turns 16, their mom Laurel (Julia Louis-Dreyfus) presents them with a gift from the boys’ deceased father.

The father died before Ian was born. Barley has only a handful of memories of his late dad. When the mysterious gift offers an opportunity to spend one day with their dad, they follow the instructions. Things go very comically awry and must be fixed. The only way? To go on a quest, of course, like days of yore. Will Barley’s deep knowledge of the old days save the day? Or will Ian’s skepticism and self-doubt steer them in a new direction?

Along the way, they meet The Manticore, voiced by Octavia Spencer. She is a fierce beast who has abandoned her legendary ways in favor of running a loud and garish family restaurant. They collide with a gang of Pixies who have forgotten how to fly (and act in public). Meanwhile, they have half a dad to lead around. These are some of the funniest movie moments Pixar has ever produced.

Between the many laughs lies the heart of the story. Two fatherless brothers find themselves asked to redefine who they are to each other. Barley and Ian each sacrifice something of great value in order to save what they haplessly set into motion. This is a grand theme, and Pixar does very well with grand themes. Onward is not afraid to explore great loss, mourning, regret, and redemption — yet it has laugh-out-loud funny moments and delightful details. It’s the type of film you will want to see again to catch the incredible detail and whimsical touches that fill the screen.