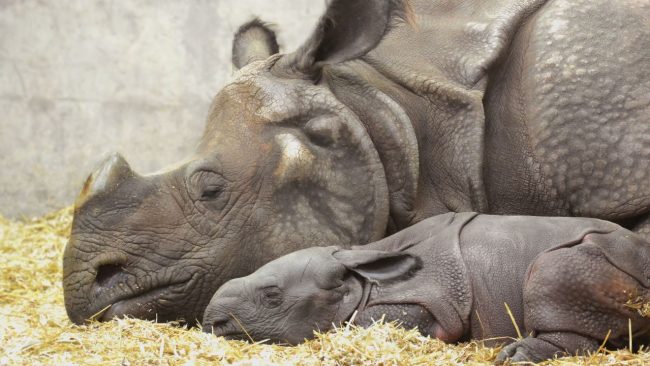 A rhino-sized effort led to a rhino-sized reward when Denver Zoo’s resident female greater one-horned rhino, Tensing, 13, welcomed her first calf on Saturday morning. Initial reports from the Zoo’s Animal Care team indicate that both Tensing and her calf are doing very well, and Tensing immediately started showing appropriate maternal behaviors, including nursing and grooming. The calf, whose name has not yet been determined, will remain behind the scenes in Toyota Elephant Passage for at least six to eight weeks to give her ample time to bond with Tensing under the watchful eye of their care team.

“The birth of this calf is the result of a truly heroic effort by our animal care, health and science teams and partners from other zoos to support the species,” said Brian Aucone, Senior Vice President for Animal Sciences. “It’s a significant event for several reasons, including the fact that this is the first greater one-horned rhino born at Denver Zoo, and because it was another very important step in reproductive science for animals in the wild and human care.”

Tensing became pregnant in December 2018 after 11 unsuccessful artificial insemination procedures, according to the zoo. The baby rhino’s father is a 10-year-old named Jontu from the Henry Doorly Zoo in Omaha.