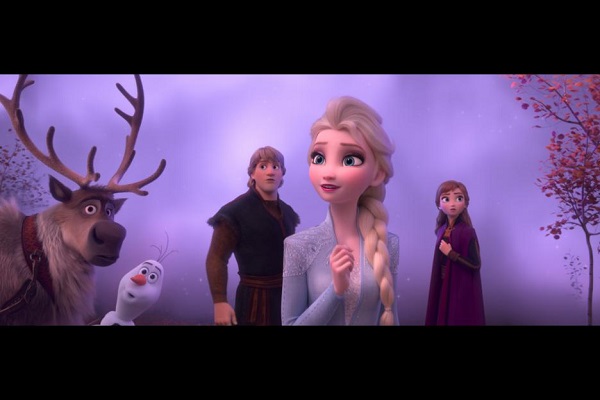 It was as inevitable as winter returning to Colorado. The massive cultural force that is all-things Frozen had to circle back into our lives for a new round of sisterly adventures and snowman hijinks. Disney’s Frozen 2 was tasked to introduce a new quest, new songs, and new characters that would be as beloved as first Frozen offering.

It succeeds on every level. From the opening scene to final post-credits fun, the film delivers great songs, gorgeous animation, and a compelling mystery filled with danger, comedic moments, and big changes for all.

The film opens with a charming scene of the two sisters as young girls with their devoted parents. Their father tells them a bedtime story about an enchanted forest. Their mother follows up with a hauntingly beautiful lullaby taught to her by her own mother. The story and the song serve as a launching pad into a harrowing journey decades later.

Elsa (Idina Menzel) has settled into her role as respected Queen of Arendelle. Anna (Kristen Bell) is her biggest supporter, defender, and cheerleader. Along with Olaf (Josh Gad), Sven, and Kristoff (Jonathan Groff), daily life in Arendelle is idyllic and peaceful. The citizens are happily setting up for a Thanksgiving-like autumn festival when Elsa begins to hear something, or someone, call to her. Nobody else can hear this call. As it increases in frequency and begins to interfere with her personal peace, she decides to face it on her own. As the first Frozen made clear, going it alone simply isn’t an option for this family.

Elsa unwittingly begins a chain of events that puts Arendelle in danger. As Queen and powerful wielder of magic, she must save her country and her family. The story and song from that long-ago night in her childhood have something to do with the current calamity. But what?

Along the way, we are treated to show-stopping songs (composed by Christophe Beck, who created the songs in the original film), Olaf’s laugh-out-loud comedic bits, and animation that left me in awe at times. Disney knew they’d have to create something special to live up to the force that is all-things Frozen. It isn’t afraid to poke fun at itself as well, which provides for well-timed laughs.

Frozen 2 is a strong, special sequel that allows characters (old and new) to grow, change, and take on new roles.