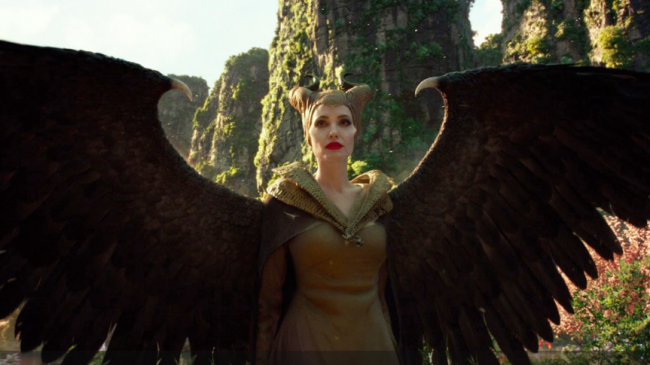 Maleficent: Mistress of Evil is a Mixed Bag of Potions

Disney’s Maleficent: Mistress of Evil marks the return of Angelina Jolie’s stylish take on Sleeping Beauty’s evil fairy. The colorfully wild world of the Moors has been ruled by Queen Aurora (Elle Fanning) for five peaceful years. All the fairies, trolls, little flower folk, and other whimsical creatures clearly love their queen. When Prince Philip (Harris Dickinson) proposes a union to unite the Moors and his kingdom of Ultstead, the fairy inhabitants of the Moors are enthusiastic co-conspirators.

However, the newly-betrothed pair worry how their parents will take the news. King John (Robert Lindsay) and Queen Ingrith (Michelle Pfeiffer) are about to have Maleficent as an in-law. Some of the best scenes in the movie explore this dynamic with humor and warmth. Shaky good will between the two families quickly vanishes, plunging the characters into war and forcing them to choose sides.

Maleficent: Mistress of Evil is at its best when Maleficent shows her tender, vulnerable, and endearing side. Unfortunately, those moments are short-lived. Michelle Pfeiffer’s Queen Ingrith is the most compelling character in the film. Along with her bizarre and oddly talented servant, Gerda (Jenn Murray), the mother of the groom sets events into motion that reveal Maleficent’s origins and ultimately the exiled family of Dark Fae she never knew.

At times, the CGI effects are overwhelming and distracting. While an obvious attempt at building the Moors into a lush paradise of adorable winged creatures and goofy trolls, it was too much at times. The heavy-handed effects didn’t stop at the Moors, following Maleficent on her journey to the realm of the Dark Fae. The story itself is dark, with a twisted and truly evil plot to end entire races of beings. It leads to the question, who exactly is the Mistress of Evil?

The movie shines in its performances by Pfeiffer, Jolie, and Fanning. The three women inhabit their characters fully. From Aurora’s innocence to Maleficent’s cunning to Queen Ingrith’s single-minded pursuit of revenge, they make the movie worth a watch. Additionally, the costumes are gorgeous eye candy.

It’s best for older children and teens, as some of the themes of war, sacrifice, and destruction of species can be heavy.