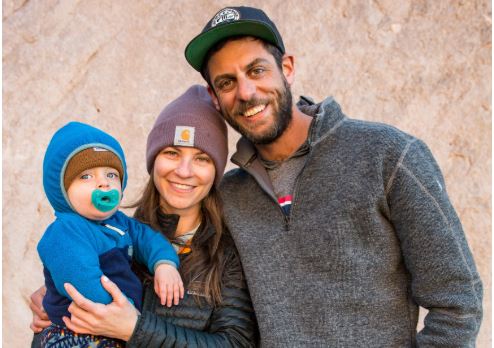 Avalanche Dog, Tough as a Mother are awesome films being screened at the Big One Tour

My name is Ariel and I’m a mother to an incredible little boy named River. But, that’s not all I am. I am a dreamer who craves adventure — it is the essence of my being and something I couldn’t ever imagine a life without.

The overall theme that I experienced while pregnant was that once you have a baby, the adventures will come to an end and your identity becomes ‘mom.’ As an aspiring filmmaker, that idea terrified me, and I was determined to prove it wrong.

Currently, my husband and I co-direct films together and travel the country with our little boy, River, in tow. Our goal is to teach River to love himself and our planet by creating humanity-focused films.

This week we are departing on a six-week a national film tour to premiere four short films our team shot this past spring. We will be traveling across the country in an Airstream trailer– one of the sponsors for the tour– making stops in 10 major cities to premiere our films, connect with locals and raise awareness for ocean and land conservation. This adventure is something I never dreamed I’d be able to do while bringing along my nearly two-year-old son.

Our first stop is in Denver, Colorado, at Improper City Brewery. The films we will be premiering are:

Ruby Dog – Working animals bring an uninhibited passion to their jobs. In this story we follow Ruby, an avalanche rescue dog and her partner Pat, as they fly deep into the backcountry of Idaho to showcase the bond they have formed and their abilities in the snow.

Protect Our Water – Set against the backdrop of Hansen Surfboards and Hobie Surf Shop, two of the oldest and most iconic shops in America, we examine the surfing pioneers, like Rob Machado, and their youthful counterparts as they fight alongside the Surfrider Foundation to conserve the ocean and protect their love.

Family Powers – Phil Powers summited K2 without oxygen and has a first ascent on Denali, but it was a simple climb on his lunch break that left him with the biggest challenge of his life. After a miscommunication and a 70ft fall, the CEO of the American Alpine Club was left fighting for his life.

Tough as a Mother (Preview) – Ariel is an accomplished rock climber, thrill seeker, and adventurer. Upon having her first child, she was left unsure on how to continue embracing her adventurous spirit. Now she is embarking on a cross-country journey with her one-year-old son River to explore public lands and meet other tough moms, so they can together define a new era of motherhood and inspire world-changing values in their kids. Full film coming next year!

Please join us, meet us and hangout with us as we celebrate the Search for the Big One Tour!