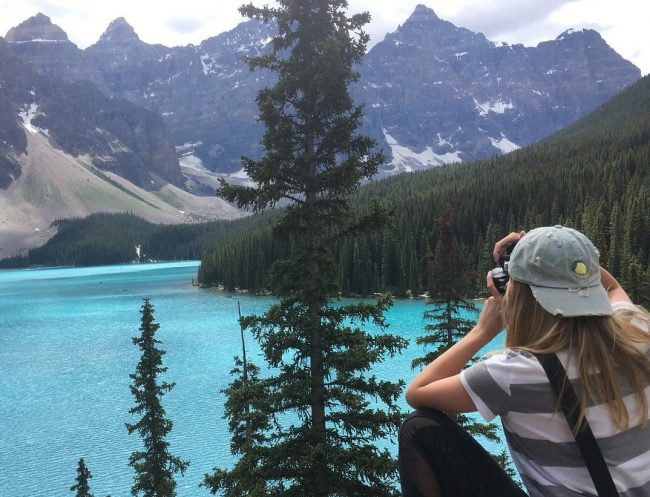 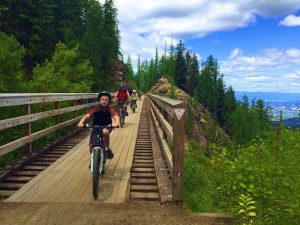 On one of our cooler days, my dad, brother Jade and his two boys joined my family for what was truly the most unique experiences I’ve ever had on two wheels. Originally built at the turn of the last century, the economic importance of the railway line decreased in later  years and by 1990 the last of the railway line was abandoned. Fortunately it was converted from rail to trail between 2003 and 2008, and re-salvaged after the Okanagan Mountain Park Fire claimed 12 of the trestle bridges.

We biked one of the most famous and scenic sections–the 12 mile (24 km) round-trip portion of Myra Canyon to Ruth Station section that passed over 18 trestle bridges and through two tunnels. Thanks to the 2 percent rail grade to accommodate the steam train technology of the day, this section is an easy hike or an awesome bike ride for families with kids. But not too young because I was admittedly gripping my handlebars a bit tighter every time we crossed a steep trestle hanging preciously on the sides of Myra Canyon. 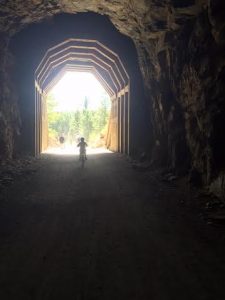 At every turn, my mouth stood agape at the views of Kelowna and Okanagan Lake as the forest cast a pale-green lambent light.

I’d spent more than a year building up this ride in my mind and it exceeded every expectation. However I felt a letdown when it was over, musing “now what?” Until I learned that this small portion of the Kettle Valley Railway Trail is part of  a 600 kilometer (360 mile) trail system that passes through vineyards, orchards, forests, lakes, deserts and mountains.

The great thing about Canada is there is always a next time.

Since the Traverse is a tad longer than the traditional mid-size SUV, the third-row functionality is awesome. The  second row captain’s chairs make it easy to access that 3rd row (perfect for parents who don’t want to uninstall a car seat).  On those long, lonely stretches of road (I’m talking about you, Eastern Washington), I loved the predictive cruise control and the fact that the dashboard not only displayed my speed but also the local speed limit. When we entered Canada, it did not automatically change to kilometers but instead converted the kms to miles on the dashboard which helped me stay on track with my speed. 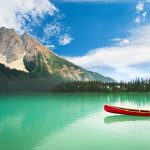 The Canadian Rockies’s soaring monoliths, teal-green lakes, thickly upholstered deep green chenille pines and glacier-scoured mountaintops are legendary. Technology has familiarized and shrunk our world and yet somehow, these mountains retain an anachronistic feeling of being truly far away while still maintaining a deep intimacy with nature. KEEP READING