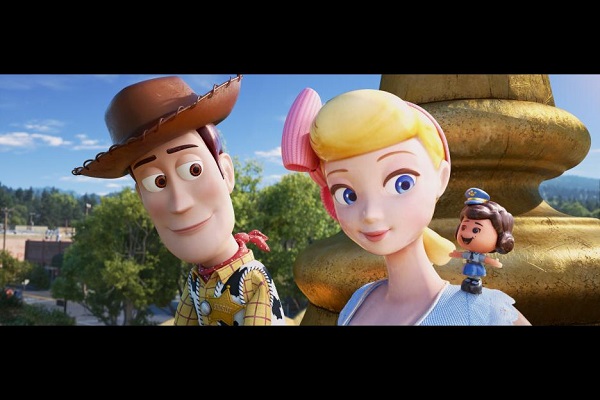 You might be familiar with the old Girl Scout song about making new friends. One is silver, one is gold. In the Toy Story universe, new friends are usually fluffy or plastic. The latest installment, Toy Story 4, introduces a new friend who is literally trash.

His name is Forky (Tony Hale). Based on the trailers, I was skeptical about Forky. He’s a googly-eyed spork with pipe cleaner arms and popsicle stick feet, held together with clay. But because new-kindergartner Bonnie wrote her name on the bottom of his wooden feet, he is a toy. He doesn’t understand that he is a toy, much like Buzz Lightyear (Tim Allen) in the first groundbreaking film. However, it isn’t a retread of the first story. The toys have grown in their understanding of friendship and loyalty, especially Woody (Tom Hanks). Where Woody was jealous and petty for much of the first film, he is overly loyal in Toy Story 4. That leads to another adventure. To meet Forky is to fall in love with Forky. The character is animated with loads of humor. Woody’s exasperation at having to convince Forky he is a toy is genuinely laugh out loud funny and very fresh.

Toy Story 4 takes a lot of risks with old and new characters. Bo Peep (Annie Potts), who got minimal screen time in the earlier films, returns as a “lost” toy who has created a band of underground renegade toys on a mission to see the world, play with some kids, and save other toys from lonely lives. She is brave, savvy, and resourceful. Bo has a little helper, a pocket toy named Giggle McDimples (Ally Maki). Don’t let her teeny tiny cuteness fool you.

Woody enlists their skillful help in his mission to save Forky from a gang of creepy antique store toys lead by a 1950s-era doll, Gabby Gabby (Christina Hendricks). She has a genuinely twisted plan, born out of hurt much like Lotso. Is she redeemable and worthy of love in the end? Toy Story 4 isn’t afraid of exploring deeper questions of sacrifice and loneliness. Yet, humor and irreverence save the day, keeping it from becoming too creepy and mired in regrets. This is the funniest Toy Story film of the bunch, and it is largely thanks to the newer characters.

Of course, it wouldn’t be a Toy Story film without Buzz lending a hand in the mission. This time, he finds himself reluctantly teaming up with Bunny (Jordan Peele) and Ducky (Keegan-Michael Key), two carnival prize toys who are a bit tired of their gig waiting to be won in an impossible-to-win carnival game. They are a comic duo who literally go hand-in-hand. Another great new addition to the toy box is the very Canadian stunt bike riding action figure, Duke Caboom (Keanu Reeves). He loves to pose and he has a great, but short, backstory.

Bonnie and her parents have their own brief, but silly-funny adventure in an RV thanks to the shenanigans of the rest of the Toy Story toys, including old friends from the previous three films, like Rex, Mr. Potato Head, Jessie, and Dolly. They play smaller roles, a testament to the natural passing of time and changing outlooks.

Ultimately, Toy Story 4 is about finding a new purpose and being willing to change. While Toy Story 3 saw Woody and friends learn to live with and love another child after Andy grows up, Toy Story 4 confronts another of life’s forks in the road.

All of it is kicked off by a toy, fashioned from trash, named Forky. 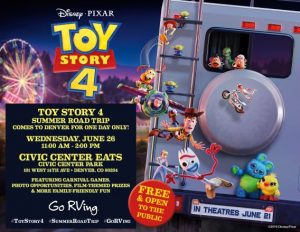 (Make sure you stay through the credits. There are a few nice, funny surprises.)

Take your Toy Story fans to Civic Center Eats, at Civic Center Park in downtown Denver between 11am and 2pm to get in on the fun, win some prizes, and make special memories celebrating almost 25 years of adventures with Woody, Buzz, and friends.