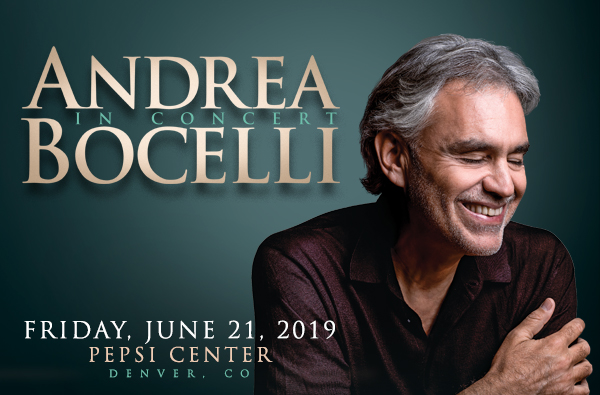 Contest: Win tickets to Andrea Bocelli at the Pepsi Center!

As one of the most recognizable voices in the industry, Andrea Bocelli has been thrilling audiences for over 20 years, counting nearly 90 million records sold worldwide. Following a record-breaking year with the release of his number one album, “Si,” Andrea Bocelli announced four special U.S. concert dates.

The June 2019 tour will bring Bocelli back to the Sacramento and Denver areas for the first time in over five years, and marks the first time Andrea has played back-to-back performances on the west coast. His annual summer run will close at Pepsi Center in Denver on June 21st.

Each performance will feature a unique repertoire from Bocelli’s landmark release “Si,” his first ever chart-topping album on the Billboard 200 chart.  The world-renowned tenor will also treat audiences to his beloved traditional selection of arias, love songs and crossover hits. The Colorado Symphony will be joining Andrea at his Denver date and longtime conductor, Eugene Kohn, will accompany Andrea for each stop on the tour.

Tickets to see Andrea Bocelli at Pepsi Center range from $82-$368 and can be purchased at http://bit.ly/19Bocelli.

Mile High Mamas is giving away a family four-pack of tickets to see Andrea Bocelli. You may enter as many as five times below.