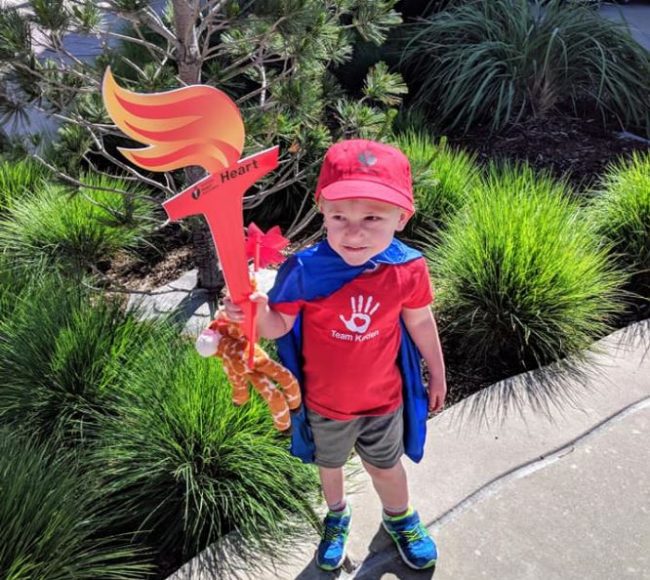 Each time someone laces up their shoes or forms a team to participate in the Denver Heart & Stroke Walk, they are instrumental in making innovative breakthroughs. Every donation helps create new technologies like groundbreaking pediatric heart and stroke research that saves babies’ lives or the kind of research that helped create artificial heart valve, cholesterol drugs, stents, and the mechanical heart pump which helps extend the life of patients. Participants of this year’s American Heart Association’s Denver Heart & Stroke Walk on June 1 at Broncos Stadium will see their dollars at work when they meet cardiovascular disease survivors and their families…families like Lisa and Kaden.

I was like any other mom.  I was 17 weeks pregnant with my 3rd child and my pregnancy was pretty typical for me with lots of morning sickness.  We were at our second trimester ultrasound and things seemed to be just fine, until the doctor kept looking at one particular spot.  After several minutes, she told us she needed to run some of the data by another doctor.  Days later, she called us with the news no parent wants to hear: there was something wrong with our unborn baby’s heart.

Kaden had a genetic disorder called DiGeorge Syndrome which had caused a rare congenital heart defect called truncus arteriosus. In plain terms, in means that his pulmonary artery and his aorta never split during development, leaving a “trunk.” This meant that his body was not being supplied with the necessary oxygen it needed. Further tests showed his aortic valve was severely malformed and regurgitating blood into his left ventricle. This was putting a tremendous amount of stress on his heart and he was already in late-stage heart failure. When we asked what the next steps were, the medical team said they were unsure. Kaden would definitely need multiple open heart surgeries to repair the damage and make his heart function as it should, but would he survive until then? Working on a heart the size of a walnut is extremely risky and the severity of his defect was extreme. Plus, I was already at risk for preterm labor and if he was born too small, surgery might not be possible until he got bigger. By then, it may be too late. The doctors told us to prepare to lose him. 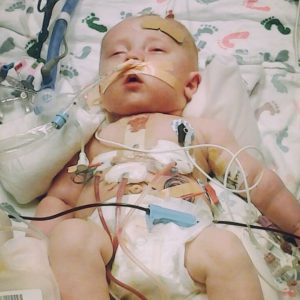 Tuesday afternoon, November 5, 2013, Kaden was born. He was 6 weeks premature, but at 5.6 pounds, was on the bigger side, which gave us hope. We were fortunate enough to be one of the first to give birth at Children’s Hospital that day and once he arrived, he was immediately taken to the CICU. The hours that followed were full of testing and they did affirm that his initial diagnosis was correct. Surgery was scheduled for the following Monday. The surgeon walked us through the procedure with us again and reiterated the risks—stressing how he was unsure of the outcome. Kaden was just too far in heart failure and would most likely be too weak to survive the surgery. However, he didn’t have a shot without it, so our decision was made for us.

The days leading up to his surgery were excruciating. Kaden had to be intubated a couple days after he was born, and I could no longer hold him. All I could do is sit by his tiny bed, hold his hand and stroke his hair as I sang to him. I tried to memorize every little detail about him—from his gray eyes, to the way he sucked on his intubation tube like a pacifier. I wanted to know him if I was going to lose him.

November 11th, we said goodbye to Kaden as they wheeled him down to the OR. Our entire family was in the room with us. As we said goodbye, the nurse sat him up. He reached out his little hand and looked directly into my eyes. Heart-wrenching is not a strong enough term to describe the feeling. The surgery took 9 hours; a group of our family and friends sat in a circle in the waiting room, praying and crying. For me, I just wanted the opportunity to have him have a story. I wanted his life to mean something. Even if it was only for a few short days.

The surgeon came in afterwards and said he was able to do most of the repair. The blood had been rerouted so that oxygen was flowing the correct way and the hole in the center of his heart was repaired. However, he was unable to repair the valve. Because he was so small, there were no valve replacements small enough to fit into his tiny heart and his heart was still struggling. Only time would tell. He needed to get bigger in order to receive a valve replacement that would help him survive.

Kaden showed us he lived up to the meaning of his name: young warrior. He fought with everything he had. He survived a dangerous sepsis infection and a life-threatening botched hernia repair. We were able to bring him home days before Christmas with the understanding that he was not out of the woods yet. Our job was to keep him healthy and get him to GROW!

The next 6 months were the most stressful and dark of my life. I was fighting with oxygen tanks, feeding tubes, pumps, doctors visits, therapists, medications, hospital stays, etc. Not to mention my other two children were 7 and 3 at the time and needed their mother, too. The guilt, the pressure was sometimes too much to bear. I was recording every single ounce of food I put into Kaden’s body. He wasn’t a baby and I wasn’t a mom—he was my patient and I was a nurse. Happy moments were few and far between. It caused tension in my marriage. We struggled to hold together the pieces of our family we had left. Meanwhile, Kaden was barely hanging on. He was constantly sweating. Everything he did took the effort of a marathon runner. He wasn’t able to breastfeed, so I was pumping round the clock to ensure he got the best nutrition possible. His breathing was so fast. His skin was grayish and spotty. Finally, at 6 months, his body quit and he went into massive heart failure. The doctors told us he needed his heart valve replacement. However, his heart still wasn’t quite big enough. We were devastated.

As they pumped his little body with medications to help him hang on, his surgeon read about a procedure where the aorta is carved out in order to get a valve to fit. It was a VERY high-risk surgery: there would be high amounts of blood loss and it would require him to be on bypass for much longer, but it was his only shot. We told him to go for it.

May 8th, 2014, Kaden went through a 13 hour-long open-heart surgery. It was grueling—one of the hardest our heart surgeon has ever done in his multiple years. When it was over, his surgeon came in. For the first time, we saw him smile. He told us, “I think we got a perfect fit!” Kaden had a mechanical valve that would keep his heart going, hopefully, for 10 years. After a month in the hospital for recovery, we came home with new hope. 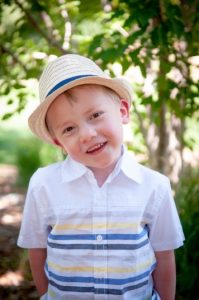 Over the next few months, we saw our little boy change. He had more energy. His skin was a glowing peachy pink. He began to show his little personality. Slowly, we got rid of the oxygen tanks and the list of medications slimed down. At his first birthday, he took a bite of his birthday cake. By Thanksgiving, he ate some of everything off the table. We stopped using the feeding tube a few months later.

Today, he is 5 years old. He still has developmental delays and sees OT, PT, and speech on a weekly basis. However, he looks like any of his preschool classmates. He is a clown and will go to any length to make you smile. He loves snuggles and playtime. He is a good eater (sometimes too good!) He swims and dances and loves Mickey Mouse more than anything. He is healthy and thriving. He is proud of the multiple scars on his chest that tell his story of survival. When you ask him about it, he’ll tell you, “I had a sick heart.” But it is just one thing of many that has made him the strong little boy you see.

Go to  www.denverheartwalk.org to learn more about the Denver Heart  & Stroke Walk on June 1.