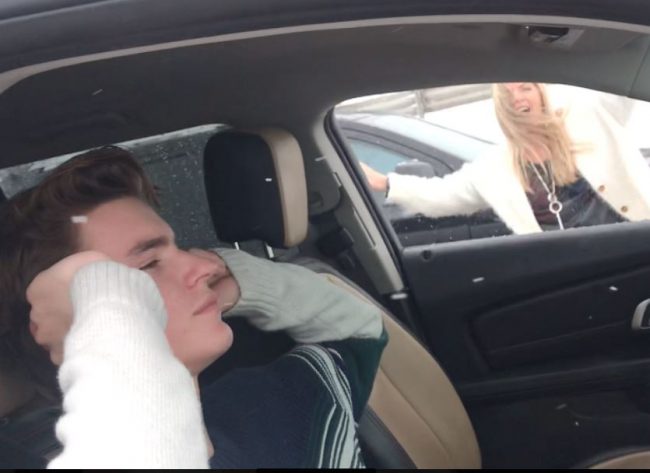 The Top 14 Parenting Violations from a highway dancing Colorado mom

In a recent Colorado snowstorm, my kids and I found ourselves stuck in traffic for almost five hours due to a horrible blizzard that left many motorists stranded.  My poor son, Nathan, was completely stressed out and my daughter Jordan, was bored out of her gourd, so I decided to lift their spirits. We hadn’t moved in over four hours and so spontaneously I seized the once in a lifetime chance to dance on the interstate. I cranked up the radio which just happened to be playing “Everybody! Rock Your Body” by the Back-Street Boys. Within a few days of posting the video on Facebook, friends from all over the nation were telling me they had seen us on the news, and within three days we were making news stations around the world! “Inside Edition” “The Today Show” and even Nick Carter from the Back-Street boy tweeted about us!

But before any of this happened, I was in the process of writing a parenting book soon to be published called, Guiding Their Drive: Parenting by Personality. Since I am a parenting coach, my five hours in gridlock inspired the following list.

We were having the worst day ever as we sat in that blizzard for almost five hours. I knew I had to paint the memory positive somehow, so I danced on the highway! Positive parenting works! How do I know? My silly little dance on the highway resonated with millions, but with my kids it created a memory that will last a lifetime!

Not only is Wendy Gossett MA,  a parenting and relationship coach with an extensive background in temperament psychology, but she recently went viral when she decided to cheer up her kids by dancing in traffic on I-25. When her second child Jordan was born, Wendy didn’t understand anything about her!  She decided to apply her experience with temperament psychology as an educator, both with schools and business teams, to her relationship with her daughter. She created a Kid Navig8tion and Family Mapping System using the 8 psychological functions of the brain to help parents understand themselves and their kids from the inside out! Parents who work with Wendy say that. “She has completely changed our lives for the better!” Sign up for a Family Mapping session, and look for “Guiding Their Drive: Parenting to your Kid’s Personality,” which will be available soon at  PeopleWorksCO.com