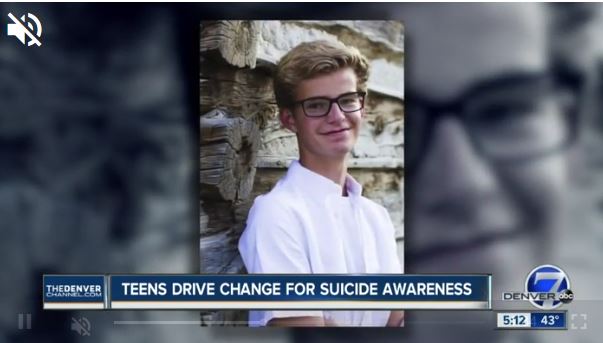 Colorado has one of the highest suicide rates in the nation. It’s the leading cause of death ages 10 – 18. That’s why a group of local teens is fighting this issue by changing the stigma and talking about it.

“There is stigma attached to all of these issues about having a child die, about teen depression, about anxiety, about suicide and it needs to change,” said Kari Eckert.

Eckert’s 15 year old son Robbie died by suicide in October 2018. She and her husband founded Robbie’s Hope Foundation in his memory to fight teen depression, anxiety and suicide through the friends their son made an impact on.

May
26
Tue
8:00 am Family-friendly Public Art Virtu... @ Virtual
Family-friendly Public Art Virtu... @ Virtual
May 26 @ 8:00 am – May 31 @ 9:00 pm
We asked Public Art staff and their families to share their favorite family-friendly pieces of art. We have also included some coloring sheets to enjoy at home. I See What You Mean Coloring Sheet Upper[...]
9:59 pm Museum Fun 101 @ Online
Museum Fun 101 @ Online
May 26 @ 9:59 pm – May 31 @ 10:59 pm
The Museum is currently closed, but have no fear, this group will bring the Museum to YOU! Check out screen-free activities created by our educators to engage your child in learning and fun from the[...]
10:01 pm Online Musical Games @ Inside the Orchestra
Online Musical Games @ Inside the Orchestra
May 26 @ 10:01 pm – May 31 @ 10:00 pm
Play this fun memory game online right now or print a downloadable version here to play at home. You can also purchase them on our merch store to have a beautiful, packaged set mailed directly[...]
10:05 pm Still Working on the Railroad @  Colorado Railroad Museum
Still Working on the Railroad @  Colorado Railroad Museum
May 26 @ 10:05 pm – May 31 @ 11:05 pm
All Aboard—online! The Colorado Railroad Museum is launching a new series of online content and project updates while the Museum itself is closed in response to the COVID-19 pandemic. Regular features include content suitable for[...]
10:07 pm Venom: At-home game @ Golden Puzzle Room
Venom: At-home game @ Golden Puzzle Room
May 26 @ 10:07 pm – May 31 @ 11:07 pm
Venom is an exciting play-at-home game filled with a variety of challenging puzzles. Dr. Montgomery, the leader of a biotech research team has just made an incredible medical discovery! Unfortunately, he has mysteriously vanished[...]
10:10 pm Visit Aurora History Museum Online @ Aurora History Museum
Visit Aurora History Museum Online @ Aurora History Museum
May 26 @ 10:10 pm – May 31 @ 11:10 pm
The Museum may be closed, but we have online resources to explore! The Aurora History Museum invites visitors to check out online exhibits, collections, lesson plans, interactive maps, AuroraTV history videos and more from home.[...]
Jun
1
Mon
10:19 pm Pedaling 4 Parkinsons @ Virtual
Pedaling 4 Parkinsons @ Virtual
Jun 1 @ 10:19 pm – Jun 6 @ 11:19 pm
Recent COVID19 related developments mean that we are not be able to gather in person for our 11 th annual ride, however, we are still determined to keep Pedaling 4 Parkinson’s! Please join us[...]
View Calendar
Add